By Clark Kent
The Australian Defence Force is investigating claims that explosives used in a military training exercise could have started the bush fires that have destroyed swathes of New South Wales.
The exercise took place at a military base near the town of Lithgow in the Blue Mountain region last Wednesday. On the same day a bush fire, which is still burning, broke out on ­defence land.
Yesterday, the ADF issued a statement about the fire, currently burning between Lithgow and Bilpin, around 50 miles north-west of Sydney, which is reported to have scorched its way through 74,000 acres, destroying hundreds of properties.
“The fire started on 16 October, the same day that defence personnel were conducting an explosive ordnance training activity,” the statement said. “Defence is investigating if the two events are linked. Our thoughts are with those who have lost property or whose property is threatened by these devastating fires.”
Firefighters were braced yesterday for worsening conditions, with higher temperatures and winds expected to intensify the danger in the coming days.
In the Blue Mountains west of Sydney, one of the worst-hit regions in the fire-ravaged New South Wales state, 193 homes have been destroyed and another 109 damaged by the fire storm that peaked on Thursday, the Rural Fire Service said.
The damage toll announced yesterday was more than double the count from the previous day and was expected to continue to rise as assessment teams and police move deeper into the destruction zone in search of survivors and victims. Homes have been reported destroyed in other regions, but no numbers are available. 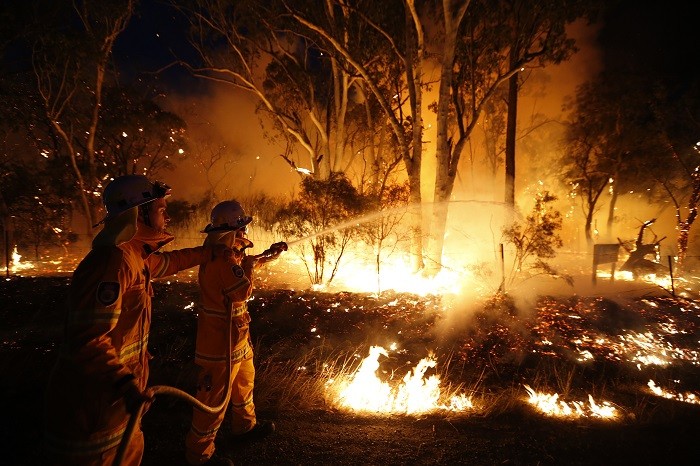 With 68 bush fires still burning – 22 of them unchecked – and dangerous weather conditions forecast through until Thursday, authorities were expecting the worst. “We could see some very, very dire conditions ranging right across the Blue Mountains,” Rural Fire Service Commissioner Shane Fitzsimmons said.
“The reason we are particularly concerned is that we went into last Thursday with not too much fire. We’re going into some bad weather now with lots of fire and literally 310 miles of fire edge that needs to be dealt with. That will present serious issues should we see hot, dry, windy weather, which is likely toward the middle of the week,” he said.
A 63-year-old man died of a heart attack on Thursday while protecting his home from fire at Lake Munmorah, north of Sydney, and at least five people – including three firefighters – have been treated in hospitals for burns and smoke inhalation.
Police are investigating allegations that two girls, aged 12 and 13, tried to light a fire in a woodland on Sydney’s western fringe on Friday. Firefighters were able to extinguish a small fire in that area without damage to property.
Police said the girls were questioned and then released. No charges were filed, but an investigation was continuing.
Arson investigators are examining the origins of several of more than 100 fires that have threatened towns surrounding Sydney in recent days. 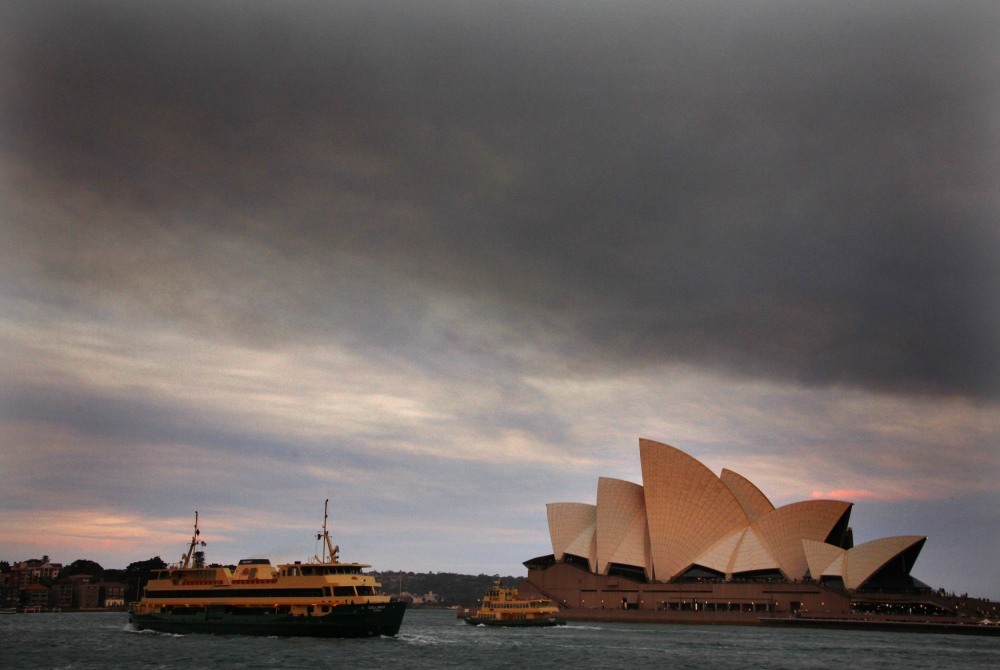 The wildfires have been extra­ordinarily intense and extra­ordinarily early in an annual fire season that peaks during the southern hemisphere’s summer, which begins in December...
Read more: Hang The Bankers

Posts : 8269
Join date : 2012-10-03
Age : 54
Location : Australia
There are 72 bush fires currently burning, the military are responsible for only one of them, there are about 3 that are from teenage arsonists and not clear on the other 60 odd!

I was wondering if this was correct. :)

Guest
I heard last evening on The One People Show (TOPs) of a lady with a home in this area on a cul-de-sac where the homes all around hers were destroyed, & hers remains whole; I believe she is Vera the healing influence instrumental in assisting Bob Wright's journey from wheel chair to now walking, beginning in Morocco. Both are part of the O.P.A.L. (One People Absent Limits) Tour, beginning Fri 10/25/13; Bob shared he felt the area was perhaps experiencing a cleansing of the old to manifest the new... interesting perspective...

Posts : 8269
Join date : 2012-10-03
Age : 54
Location : Australia
The military have caused a shit storm over this, like fancy mucking around with explosives in the extreme conditions they are experiencing at the moment. Ridiculous. common would say "holy crap it's damn hot, windy and extremely dry maybe we shouldn't let off explosives?" Far out! There is heaps of conspiracies floating around too and the spokespeople are having a fit LOL " there are no conspiracies here" lol yeah whatevs!

Thanks HL we are well out of way up here but they have just issued an extreme fire warning for our area as of midnight last night, so lets hope douche bags don't strike up here!