In the spirit of Halloween, scientists are releasing a trio of stellar ghosts caught in infrared light by NASA's Spitzer Space Telescope. All three spooky structures, called planetary nebulas, are in fact material ejected from dying stars. As death beckoned, the stars' wispy bits and pieces were blown into outer space. 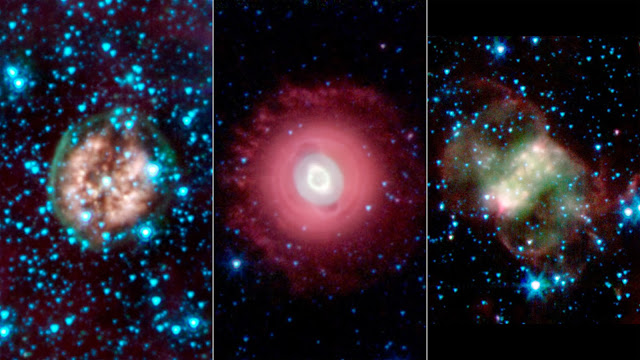 "Some might call the images haunting," said Joseph Hora of the Harvard-Smithsonian Center for Astrophysics, Cambridge, Mass., principal investigator of the Spitzer observing program. "We look to the pictures for a sense of the history of the stars’ mass loss, and to learn how they evolved over time."

All stars about the mass of our sun will die similarly ethereal deaths. As sun-like stars grow old, billions of years after their inception, they run out of fuel in their cores and puff up into red, giant stars, aptly named "red giants." The stars eventually cast off their outer layers, which expand away from the star. When ultraviolet light from the core of a dying star energizes the ejected layers, the billowy material glows, bringing their beautiful shapes to light.

These objects in their final death throes, the planetary nebulas, were named erroneously after their resemblance to planets by William Herschel in 1785. They come in an array of shapes, as illustrated by the three highlighted here in infrared images from Spitzer. The ghostly material will linger for only a few thousand years before ultimately fading into the dark night.

The brain-like orb called PMR 1 has been nicknamed the "Exposed Cranium" nebula by Spitzer scientists. This planetary nebula, located roughly 5,000 light-years away in the Vela constellation, is host to a hot, massive dying star that is rapidly disintegrating, losing its mass. The nebula's insides, which appear mushy and red in this view, are made up primarily of ionized gas, while the outer green shell is cooler, consisting of glowing hydrogen molecules.

The Ghost of Jupiter, also known as NGC 3242, is located roughly 1,400 light-years away in the constellation Hydra. Spitzer's infrared view shows off the cooler outer halo of the dying star, colored here in red. Also evident are concentric rings around the object, the result of material being tossed out periodically during the star's fitful death.

This planetary nebula, known as NGC 650, or the Little Dumbbell, is about 2,500 light-years from Earth in the Perseus constellation. Unlike the other spherical nebulas, it has a bipolar or butterfly shape due to a "waist," or disk, of thick material, running from lower left to upper right. Fast winds blow material away from the star, above and below this dusty disk. The ghoulish green and red clouds are from glowing hydrogen molecules. The green area is hotter than the red.