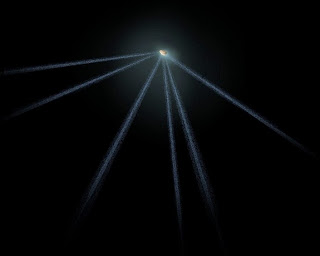 What if its not an asteroid? -Bill

Astronomers have spotted a never-before-seen phenomenon in our solar system's asteroid belt: a space rock with six tails, spewing dust from its nucleus like spouts of water radiating from a lawn sprinkler.

Scientists using the Pan-STARRS 1 telescope at the summit of Maui's Haleakala volcano in Hawaii first detected the six-tailed asteroid in August. They dubbed it P/2013 P5 and noted that it looked fuzzier than typical asteroids, which usually appear as tiny points of light. More detailed observations with the powerful Hubble Space Telescope in September revealed a clearer picture of asteroid, showing it had six comet-like tails.

An asteroid with six tails is shown in images from Hubble.Pin It Named P/2013 P5, this object is the first body in the asteroid belt to be spotted with multiple tails. The tails seem to have swung around in the time between the initial images taken by the Hubble Space Telescope on Sept. 10, 2013 and the second observations on Sept. 23, 2013.

"We were literally dumbfounded when we saw it," researcher David Jewitt of the University of California at Los Angeles said in a statement from NASA. "Even more amazing, its tail structures change dramatically in just 13 days as it belches out dust. That also caught us by surprise. It's hard to believe we're looking at an asteroid." [The Strangest Asteroids in the Solar System]


In the time between Hubble's first observation on Sept. 10 and its second peek at the asteroid on Sept. 23, the tails appeared to have completely swung around. Jewitt said he and his colleagues were "completely knocked out" by this finding.

This labeled view of asteroid P/2013 P5 shows clearly how its appearance changed in the course of just 13 days.

The tails seem to have formed in bursts and not all at once, which is why the researchers don't think they formed as the result of an impact with another asteroid.

Rather, P/2013 P5 could have sprouted dust tails after it started spinning out of control. The researchers suspect radiation pressure caused the asteroid to start rotating faster and faster until its weak gravity no longer could hold it together, sending the surface material of the space rock flying off at several points in the asteroid's recent history.

The researchers even pinpointed when they think these recent dust-ejection events may have occurred, in a series of spurts from April to September.

Though seeing a six-tailed space rock is a first for astronomers, the new research hints that there could be more asteroids with debris trails emanating from their center.

"In astronomy, where you find one, you eventually find a whole bunch more," Jewitt said in a statement. "This is just an amazing object to us, and almost certainly the first of many more to come."

While P/2013 P5 likely isn't a victim of a recent collision, researchers think the asteroid may be one of the leftover fragments of a much larger space rock that broke apart 200 million years ago. And the space rock likely doesn't contain any water, the scientists believe, based on previous examinations of collision fragments that were in orbits similar but have to P/2013 P5 have made it down to Earth's surface in the form of meteorites.

The Hubble Space Telescope is a joint project between NASA and the European Space Agency. The observations were detailed online in the Nov. 7 issue of the Astrophysical Journal Letters.