Happiest man on earth is a Buddhist monk 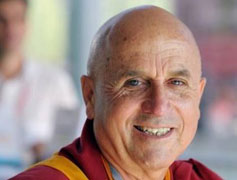 by Jaya
According scientists, he is the world’s happiest man. His level of mind control is astonishing and the upbeat impulses in his brain are off the scale. Tibetan monk and molecular geneticist Matthieu Ricard is the happiest man in the world according to researchers at the University of Wisconsin. The 66-year-old’s brain produces a level of gamma waves – those linked to consciousness, attention, learning and memory – never before reported in neuroscience. 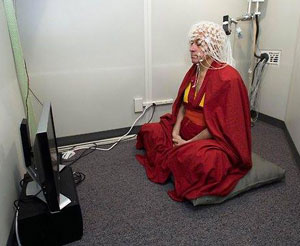 Ricard, French academic-turned-Buddhist monk, is to share his secrets to make the world a happier place. The trick, he reckons, is to put some effort into it. In essence, happiness is a “skill” to be learned. As he grins serenely and his burgundy robes billow in the fresh Himalayan wind, it is not difficult to see why scientists declared Matthieu Ricard the happiest man they had ever tested.
His advice could not be more timely as very recently the world’s happiest country index showed a drastic drop of happiness in many parts of the world. Thanks to the uncertainties such as Arab spring, terrorism, economic concerns, debt & accelerating natural disasters.
Though there could be many concerning issues public have to face today, the studies show that the mind can rise above it all to increase almost everyone’s happiness. Ricard, who is the French interpreter for Tibet’s spiritual leader, the Dalai Lama, took part in trials to show that brain training in the form of meditation can cause an overwhelming change in levels of happiness. 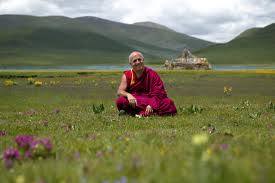 He passionately sets out why meditation can alter the brain and improve people’s happiness in the same way that lifting weights puts on muscle. “It’s a wonderful area of research because it shows that meditation is not just blissing out under a mango tree but it completely changes your brain and therefore changes what you are,” The monk says.
MRI scans showed that he and other long-term meditators – who had completed more than 10,000 hours each – experienced a huge level of “positive emotions” in the left pre-frontal cortex of the brain, which is associated with happiness. The right-hand side, which handles negative thoughts, is suppressed. Further studies have shown that even novices who have done only a little meditation have increased levels of happiness. But Ricard’s abilities were head and shoulders above the others involved in the trials.
“The mind is malleable,” Ricard told The Independent on Sunday yesterday. “Our life can be greatly transformed by even a minimal change in how we manage our thoughts and perceive and interpret the world. Happiness is a skill. It requires effort and time.”
Ricard was brought up among Paris’s intellectual elite in the 1960s, but after working for a PhD in biochemsitry he gave up on everything behind to become a Tibetan Buddhist in a Himalayan hermitage, says anyone can be happy if they only train their brain. The 66-year-old, accompanying other senior Tibetan monks at a festival in the remote Nepalese Himalayan region of Upper Dolpa, has become a globally respected Buddhist and is one of the religion’s leading western scholars. 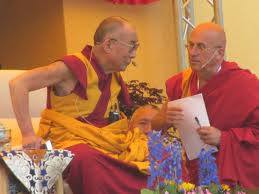 He addressed the World Economic Forum in Davos at the height of the financial crisis in 2009 to tell gathered heads of state and business leaders it was time to give up greed in favor of “enlightened altruism.” His other works include “Happiness: A Guide to Developing Life’s Most Important Skill” and several collections of photographs of the landscape, people and spiritual masters of the Himalayas.
Ricard donates all proceeds of his books to 110 humanitarian projects which have built schools for 21,000 children and provide healthcare for 100,000 patients a year.He was awarded the French National Order of Merit for his work in preserving Himalayan culture but it is his work on the science of happiness which perhaps defines him best.
Ricard sees living a good life, and showing compassion, not as a religious edict revealed from on high, but as a practical route to happiness. “Try sincerely to check, to investigate,” he said. “That’s what Buddhism has been trying to unravel — the mechanism of happiness and suffering. It is a science of the mind.” AFP reported.