OUT OF MIND » TRUTH IN CONSPIRACY THEORIES? » HISTORIES MYSTERIES » 21 Most Amazing Archaelogical Discoveries Reported In 2013

21 Most Amazing Archaelogical Discoveries Reported In 2013

21 Most Amazing Archaelogical Discoveries Reported In 2013


MessageToEagle.com - 2013 was a great year for archaelogists and historians examining our secretful past. Several significant discoveries were made and we have now reason to learn more about our anscestors and the history of planet Earth.
We have put together a list of some of the most eye-catching and interesting archaeological events that captured our attention. 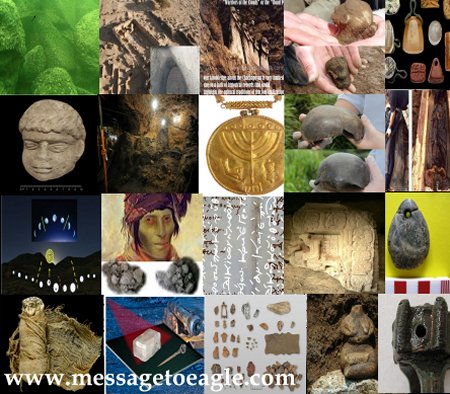 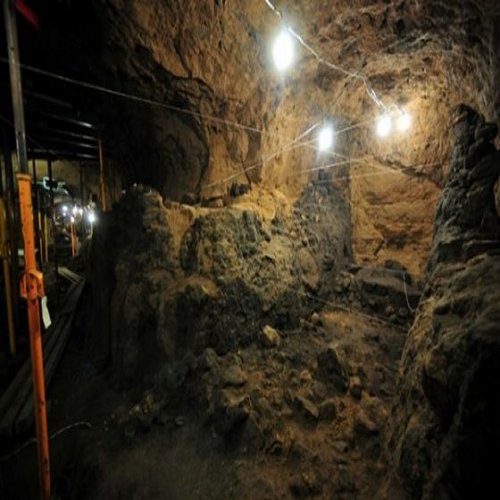 Archeologists have a made an intriguing and puzzling discovery. Hundreds of strange metallic mysterious glowing spheres have been unearthed beneath an ancient temple.
The purpose of these spheres remains an unsolved mystery for the moment. It looks almost like a wonderful underground planetarium. Read more 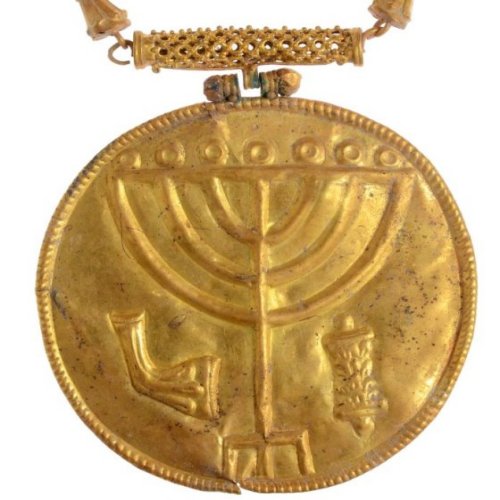 A fascinating discovery of thirty-six Byzantine gold coins, gold and silver jewelry, and a gold religious medallion has been made by a team of archaeologists who conducted excavations on the City of David's summit and at the southern wall of Jerusalem's Temple Mount.
The treasures were abandoned in the context of the Persian conquest of Jerusalem in 614 CE... Read more 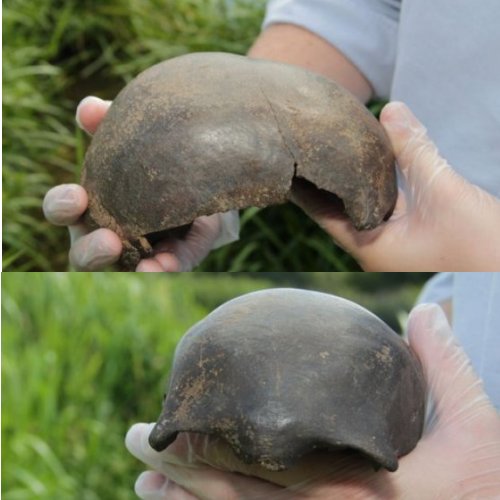 Archaeologists have made an astonishing discovery. A 5,000 year-old skull of unknown origin was accidentally found on the banks of a river in Worcershire by a walker who thought it was a coconut.
What makes the skull so unique is how well-preserved it is and scientists find it hard to believe it could have been kept underwater for so long. So where did it come from and how did it end up in the river? Read more 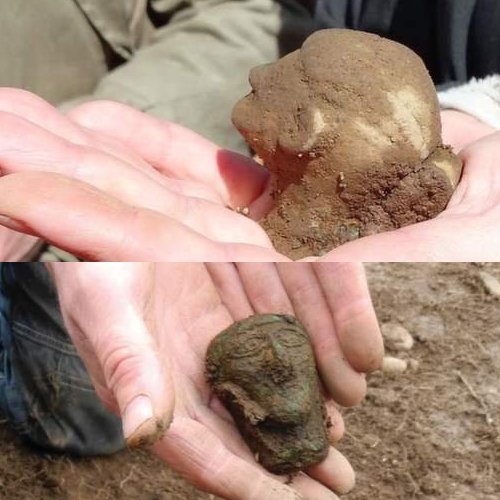 Archaeologists in Sweden have made an astounding discovery unearthing 29 ancient figurines of gold men ("guldgubbar") dating back to the Iron Age.
Working in great secrecy, archaeologists made this sensational find in Blekinge at West Vång peasant village northeast of Ronneby, located in southern Sweden. No fewer than 29 anthropomorphic gold foils, gold men so-called "guldgubbar" have been discovered at the site. This is the third largest find of gold men to have been made in Sweden to date. Read more 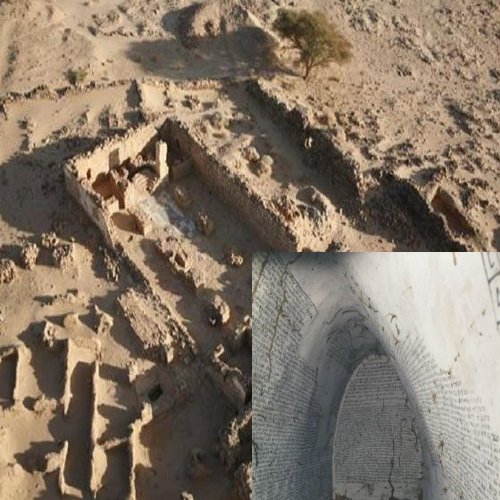 An enigmatic 900-year-old crypt covered with "magical" inscriptions protecting the tomb inside has been uncovered by a group of archaeologists excavating in Sudan.
The crypt was excavated in a monastery at Old Dongola, the forgotten powerful kingdoms of medieval Africa. Inside the tomb were seven mummies, all dressed very simply in linen clothing... Read more

6. Mysterious Sarcophagi Belonging To The Chachapoyas "The Warriors of the Clouds" 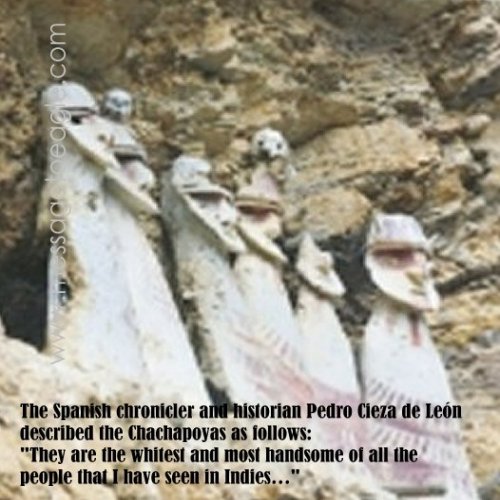 Archaeologists working in the Amazonas region of Peru have discovered 35 sarcophagi belonging to the Chachapoyas culture. The mysterious pre-Incan Chachapoyas were known as the "Warriors of the Clouds" or the "Cloud People" what in Quechua means Chachapoyas, those who inhabited cloud forests of northern Peru, above the river valleys of the Utcubamba and Marañon.
The discovery was made this year with the help of a super long zoom camera. Read more

7. A Submerged Monumental Structure In The Sea Of Galilee Israel 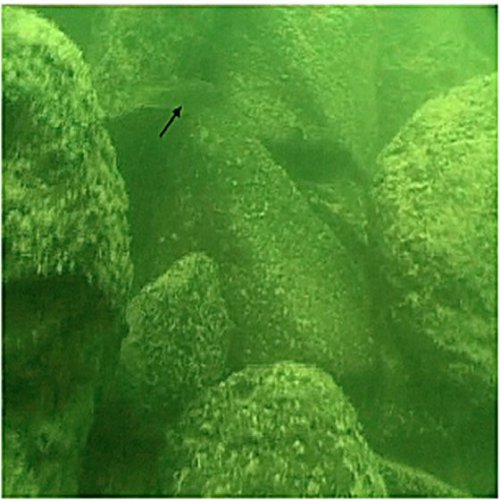 This ancient, shallow sub-bottom structure (up to 13 m deep) resembles a burial marker but archaeologists are not certain of its true purpose.
Close inspection by scuba diving revealed that the structure is made of basalt boulders up to 1 m long with no apparent construction pattern. The boulders have natural faces with no signs of cutting or chiselling. Read more

8. 600 Ancient Seals And Amulets Found In Prehistoric Sanctuary In Turkey 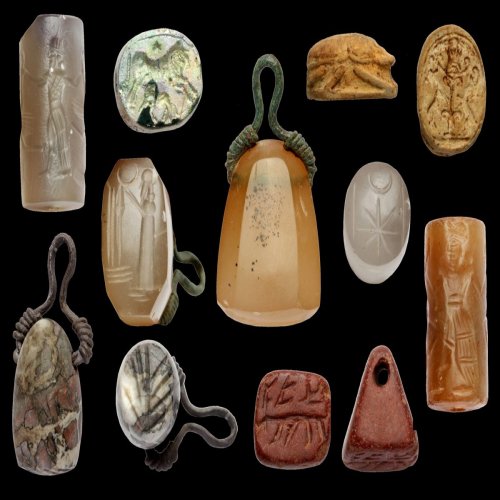 Archaeologists have discovered an unusually large find of more than 600 stamp seals and cylinder seals unearthed in an ancient sanctuary in Turkey.
Different themes can be found on the seals and amulets: the spectrum ranges from geometric ornaments and astral symbols to elaborate depictions of animals and people. This includes, for example, praying men in front of divine symbols and a royal hero fighting animals and hybrid creatures. Read more 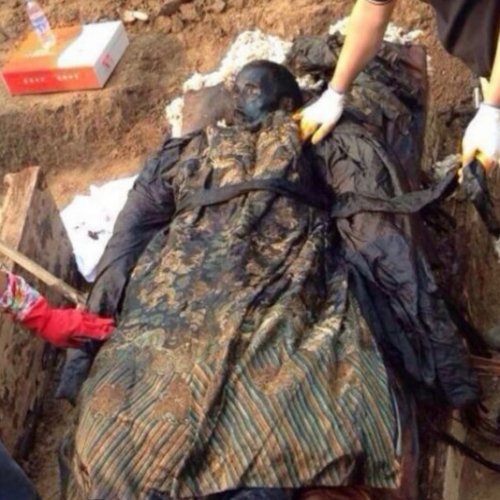 Archaeologists have made yet another incredible discovery. When experts opened a 300 year-old coffin they found perfectly preserved body!
What happened next is somewhat of a mystery and archaeologists have begun an investigation. Read more 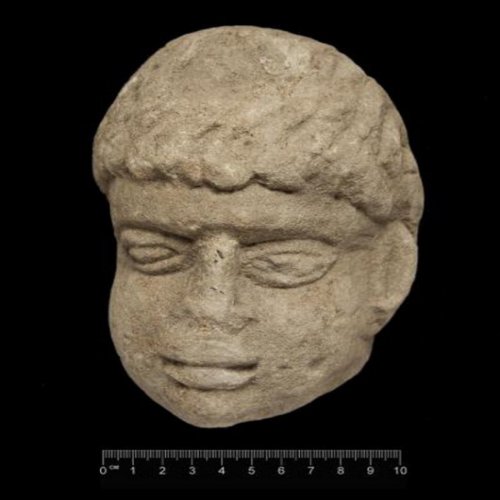 Archaeologists have unearthed an 1,800-year-old carved stone head of what is believed to be a Roman god. The god's identity remains unknown for the moment. The discovery was made at Binchester Roman Fort, near Bishop Auckland, in County Durham in an ancient rubbish dump.
The carved stone head dates from the 2nd or 3rd century AD and resembles the Celtic deity Antenociticus. Read more 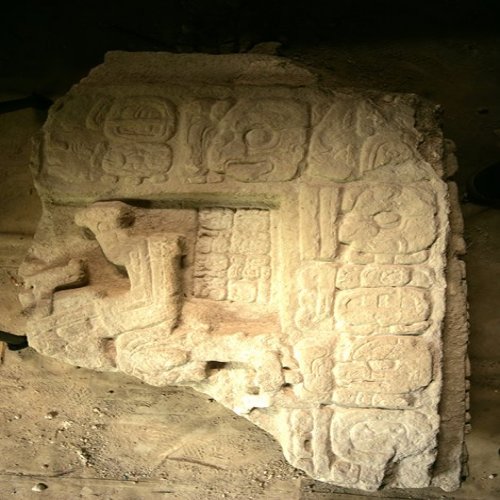 While tunneling beneath the main temple of the ancient Maya city of El Perú-Waka' in northern Guatemala, archaeologists have discovered an intricately carved stone monument with hieroglyphic text regarding a little-known sixth-century Mayan princess.
"Here the Snake queen, Lady Ikoom, prevailed in the end." Read more 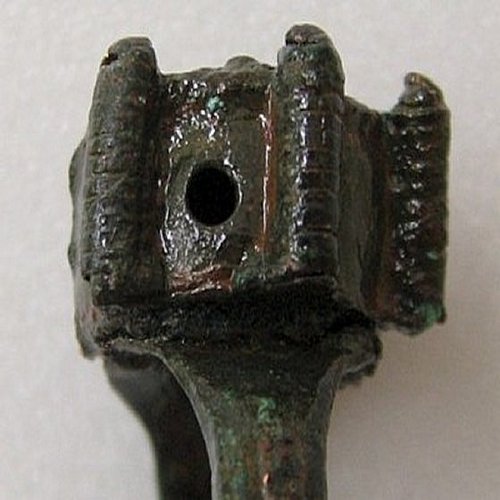 The ring wasn't always only a symbol of wealth, infinity, friendship and a magical talisman that protected from injuries and "the evil eye". In ancient times, the ring was also a harbinger of doom, the envy of the gods or a bad omen.
A few months ago, archaeologists digging at the ruins of the medieval fortress on Cape Kaliakra, near the town of Kavarna on the Bulgarian Black Sea coast, found a well-preserved poison ring. Read more 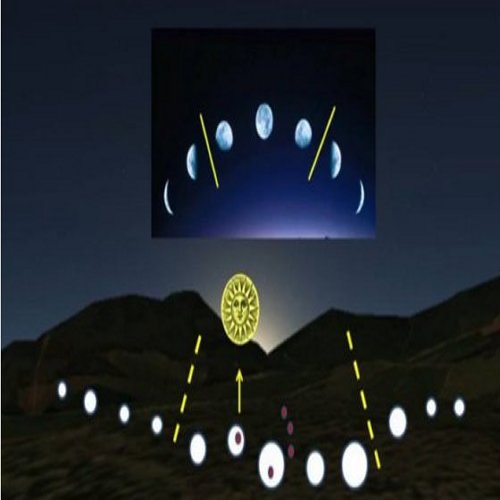 Archaeologists revealed they have discovered what could be the world's oldest created by hunter-gatherer societies and dating back to around 8,000 BC. The lunar calendar was found in an Aberdeenshire field in Scotland.
Researchers discovered that a monument created by hunter gatherers in Aberdeenshire nearly 10,000 years ago appears to mimic the phases of the Moon in order to track lunar months over the course of a year. Read more

14. Neolithic Houses And Hundreds Of Clay Figurines Unearthed In Greece 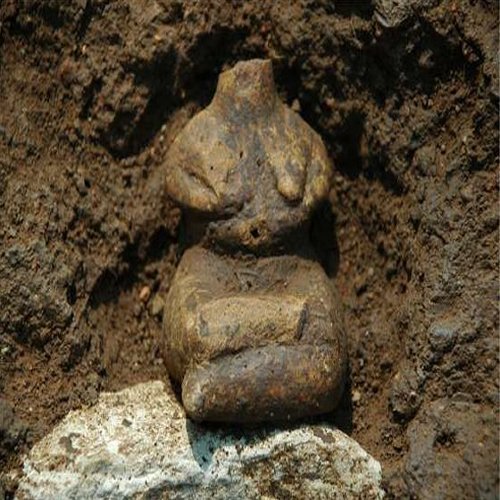 Over 300 clay figurines have been unearthed by archaeologists studying a Neolithic archaeological site of Koutroulou Magoula near the Greek village of Neo Monastiri, around 160 miles from Athens, Greece. The figurines were found all over the site, with some located on wall foundations.
It’s believed the purpose of figurines was not only as aesthetic art, but also to convey and reflect ideas about a community’s culture, society and identity. Read more 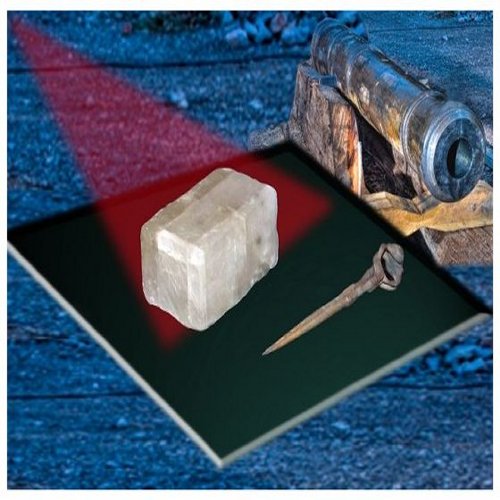 Archaeologists have discovered a special crystal that suggests legendary Viking sunstones did exists in reality.
It is believed that Vikings used so-called sunstones as a compass to find their way in arctic waters. Researchers suggest that sunstones could have been held up toward the center of the sky, allowing sunlight to hit it and get polarized and broken into an "ordinary" and an "extraordinary" beam. Read more

16. One Of The Oldest Treasures Found In Europe 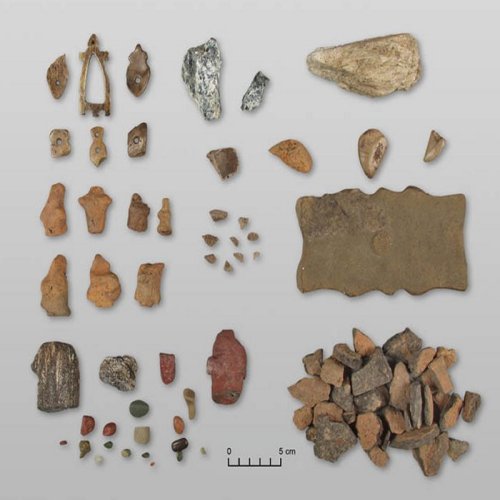 The findings, which are almost 8000 year old, contain Early Neolithic jewelry and female figurines. The unique hoard is comprised of some 80 objects made of stone, clay and bone.
“This collection from Belica, in all its completeness, provides a unique glimpse into the symbols of the earliest farmers and herdsmen in Europe... Read more 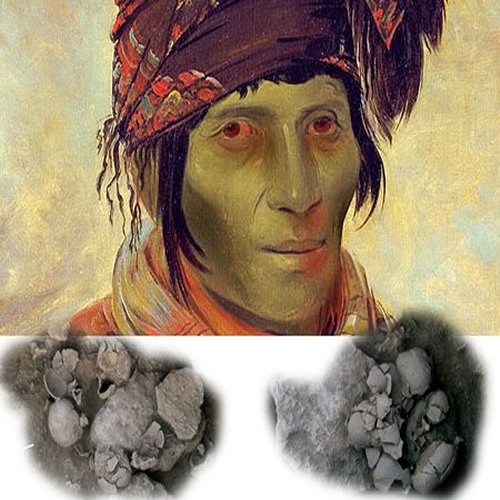 Several puzzling ancient skulls with their faces smashed in offer possible evidence our ancestors attempted to fight a zombie apocalypse.
Who were these mysterious feared beings whose skulls were exhumed and detached from their bodies several years after originally being buried? Read more 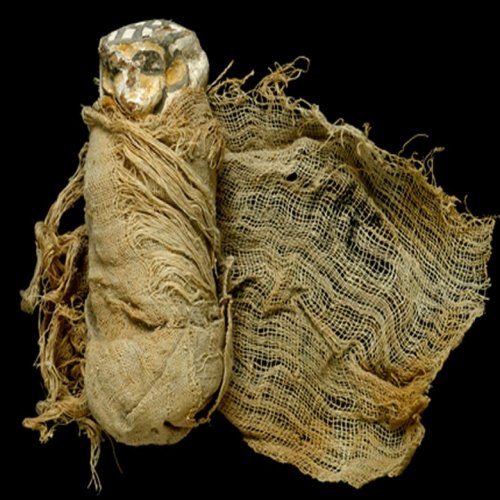 Spanish researchers have found the burials of four personages belonging to the elite of the 17th Dynasty of Ancient Egypt, who lived about 3.550 years ago on the hill of Dra Abu el-Naga in Luxor (ancient Thebes).
The findings shed light on a little-known historical period in which Thebes becomes the capital of the kingdom and the empire’s foundations become established with the dominance of Egypt over Palestine and Syria to the north, and over Nubia to the south. Read more 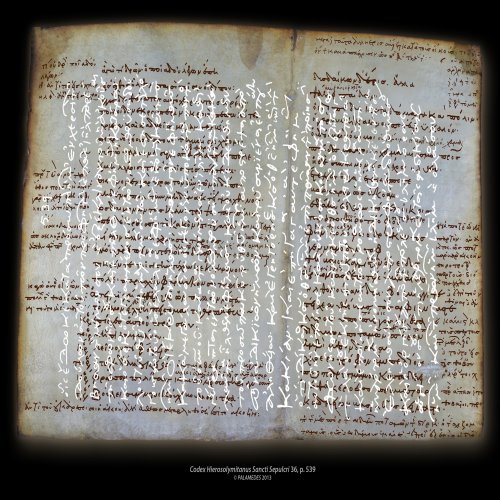 Using very sophisticated multispectral imaging methods, scientists have been able to decipher up to three text layers in the manuscripts, which were superimposed on each other.
The manuscript in Jerusalem originates from the famous Library of the Holy Sepulchre at Jerusalem. Read more 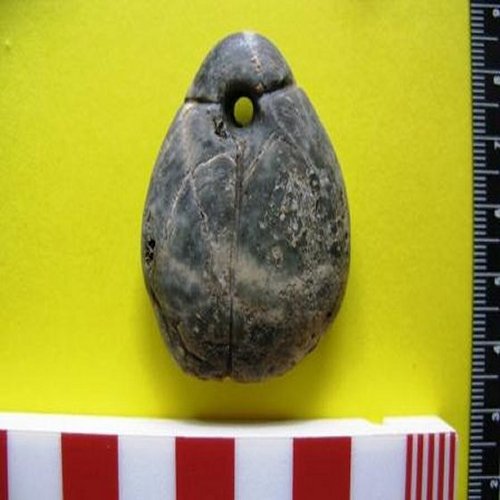 The age of the statue could range from 10,500 to 11,000 years old based on the fact it was discovered at a site Ayia Varvara-Asprokremnos (AVA) that has been radio-carbon dated to between 8800-8600 BC, near the beginning of the Neolithic Period - also known as the Late Stone Age - when the transition from hunting to farming economies was occurring throughout the Middle East.
The discovery supports a new theory that humans occupied the tiny Mediterranean island about 1,000 years earlier than previously believed -- a discovery that fills an important gap in Cypriot history. Read more

21. One Of The World's Oldest Ancient Egyptian Sundials 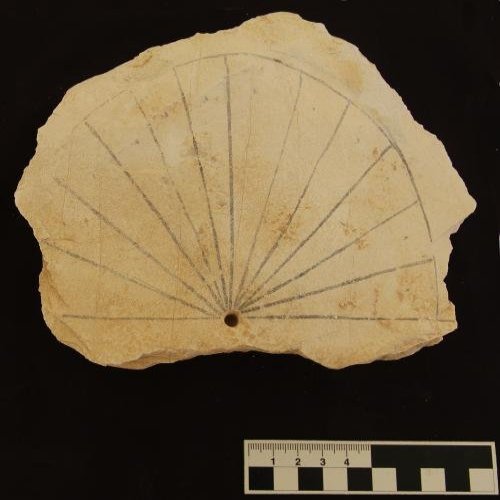 A group of scientists have discovered on of the world's oldest Egyptian sundials. The sundial was found while the team was clearing the entrance to one of the tombs. The researchers found a flattened piece of limestone (so-called Ostracon) on which a semicircle in black color had been drawn.
The semicircle is divided into twelve sections of about 15 degrees each. Read more

OUT OF MIND » TRUTH IN CONSPIRACY THEORIES? » HISTORIES MYSTERIES » 21 Most Amazing Archaelogical Discoveries Reported In 2013