True facts about Ocean Radiation and the Fukushima Disaster
November 28, 2013
by Kim Martini
deepseanews
On March 11th, 2011 the Tōhoku earthquake and resulting tsunami wreaked havoc on Japan. It also resulted in the largest nuclear disaster since Chernobyl when the tsunami damaged the Fukushima Daiichi Nuclear Power Plant. Radioactive particles were released into the atmosphere and ocean, contaminating groundwater, soil and seawater which effectively closed local Japanese fisheries.
Rather unfortunately, it has also led to some wild speculation on the widespread dangers of Fukushima radiation on the internet. Posts with titles like “Holy Fukushima – Radiation From Japan Is Already Killing North Americans” and ”28 Signs That The West Coast Is Being Absolutely Fried With Nuclear Radiation From Fukushima” (which Southern Fried Science has already throughly debunked ) keep popping up on my facebook feed from well-meaning friends.
I’m here to tell you that these posts are just plain garbage. While there are terrible things that happened around the Fukushima Power Plant in Japan; Alaska, Hawaii and the West Coast aren’t in any danger.  These posts were meant to scare people (and possibly written by terrified authors). They did just that, but there is a severe lack of facts in these posts. Which is why I am here to give you the facts, and nothing but the facts.
WHAT WAS RELEASED INTO THE OCEAN AT FUKUSHIMA?
The radioactive rods in the Fukushima power plant are usually cooled by seawater [CORRECTION: they are usually cooled by freshwater. As a last ditch emergency effort at Fukushima seawater was used as a coolant.]. The double whammy of an earthquake and a tsunami pretty much released a s**tstorm of badness: the power went out, meltdown started and eventually the radioactive cooling seawater started leaking (and was also intentionally released) into the ocean. Radioactive isotopes were also released into the air and were absorbed by the ocean when they rained down upon it. These two pathways introduced mostly Iodine-131, Cesium-137, and Cesium-134, but also a sprinkling of Tellurium, Uranium and Strontium to the area surrounding the power plant.
There aren’t great estimates of how much of each of these isotopes were released into the ocean since TEPCO, the company that owns the power plant hasn’t exactly been forthcoming with information, but the current estimates are around 538,100 terabecquerels (TBq) which is above Three-Mile Island levels, but below Chernobyl levels. And as it turns out, they recently found contaminated groundwater has also started leaking into the sea. TEPCO, the gift that keeps on giving.
WHAT’S A BEQUEREL? WHAT’S A SIEVERT?
Units of Radiation are confusing. When you start reading the news/literature/blogs, there are what seems like a billion different units to explain radiation. But fear not, I’ve listed them below and what they mean (SI units first).
Becquerel[Bq] or Curie[Ci]: radiation emitted from a radioactive material  (1 Ci = 3.7 × 1010 Bq)
Gray [Gy] or Rad[rad]: radiation absorbed by another material (1Gy = 100 rad)
Sieverts[Sv]* or “roentgen equivalent in man”[rem]: how badly radiation will damage biological tissue (1 Sv = 100 rem) 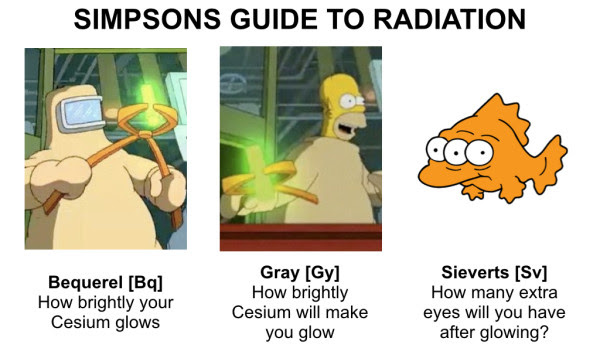 You can convert from Grays and Rads to Rem and Sieverts, but you have to know what kind of radiation it is. For example alpha radiation from naturally occurring Polonium-210 is more damaging to biological tissues than gamma radiation from Cesium-137. Even if you absorbed the same number of Grays from Cesium or Polonium, you would still effectively receive more damaging radiation from Polonium because the number of Sieverts is higher for Polonium than Cesium. And kids, Sieverts andSeavers  are both dangerous to your health but please don’t confuse them.
WHAT’S CESIUM-137?
Cesium-137 is product of nuclear fission. Before us humans, there was no Cesium-137 on earth. But then we started blowing stuff up with nuclear bombs and VOILA!, there are now detectable, but safe, levels of Cesium-137 in all the world oceans.
WHAT DO THE MAPS OF FUKUSHIMA RADIATION IN THE PACIFIC REALLY TELL US?
There are a bunch of maps being thrown around on the internet as evidence that we are all going to die from Fukushima radiation. I’m going to dissect them here. Apologies in advance for dose of snark in this section because some of these claims are just god awful. Spoiler: radiation probably has reached the West Coast but it’s not dangerous.
MAP OF TERROR #1: The Rays of Radioactive Death! 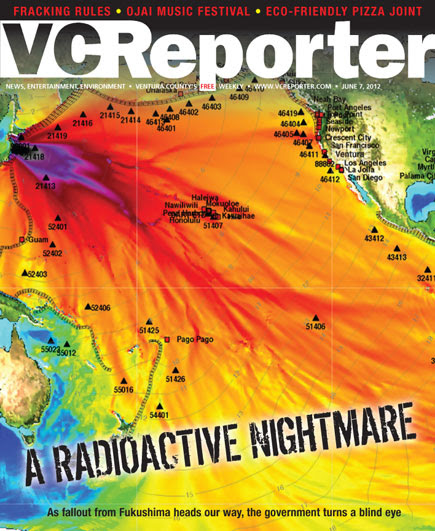 [source: http://www.enviroreporter.com/investigations/fukushima/a-radioactive-nightmare/]
This is not a map of Fukushima Radiation spreading across the Pacific. This is a map of the estimated maximum wave heights of the Japanese Tohuku Tsunami by modelers at NOAA. In fact, tsunamis don’t even transport particles horizontally in the deep ocean. So there is no way a Tsunami could even spread radiation (except maybe locally at scales of several miles as the wave breaks onshore). Dear VC reporter, I regret to inform you this cover image could be the poster child for the importance of journalistic fact-checking for years to come.
MAP OF TERROR #2: EHRMAGHAD radioactive SPAGHATTA NADLES attack Hawaii!

I mean I guess this is a bit better. At least this map used an ocean model that actually predicts where radioactive particles will be pushed around by surface ocean currents. But it still gets a BIG FAT FAIL. The engineering company that put this image/piece of crap out there couldn’t even be bothered to put a legend on the map. Their disclaimer says “THIS IS NOT A REPRESENTATION OF THE RADIOACTIVE PLUME CONCENTRATION.” Then what do the colors mean?
MAP OF TERROR #3: THE BLOB!

It’s true, oceanographic models have shown that radiation from Fukushima has probably already hit Aleutians and Hawaiian Island chain, and should reach the California Coast by Fall 2014 [Beherns et al. 2012]. The map above is showing the spread of Cesium-137 from the Fukushima reactor would look like right now, I mean radiation is apparently EVERYWHERE! But what is missing from most of the discussion of these maps is what  the colors ACTUALLY mean.
We shall now seek guidance from the little box in the upper right hand corner of the map called the legend**.  The colors show how much less radioactive the the decrease in the radioactive concentrations of Cesium-137 isotopes have become since being emitted from Fukushima. For example, the red areas indicate the Fukushima Cesium-137 is now more than 10,000 times less radioactive concentrated than when released. The California Coast, more than a million times less. The punchline is that overall concentrations of radioactive isotopes and therefore radioactivity in the Pacific will increase from Pre-Fukushima levels, but it will be way less than what was seen in coastal Japan and definitely not enough to be harmful elsewhere (we’ll get to more of that later).
** As Eve Rickert has thoughtfully pointed out, my description of the image is a little confusing. I’ve added corrections in blue to clarify.
HOW MUCH RADIATION WILL REACH THE WEST COAST?
Practically, what does ten thousand or a million times less radiation mean? It means that these models estimate the West Coast and the Aleutians will see radiation levels anywhere from 1-20 Bq/m3,while Hawaiian Islands could see up to 30 Bq/m3 [Beherns et al. 2012, Nakano et al. 2012,  Rossi et al. 2013 ].
I could write a small novel explaining why the numbers differ between the models. For those that love the details, here’s a laundry list of those differences: the amount of radiation initially injected into the ocean, the length of time it took to inject the radiation (slowly seeping or one big dump), the physics embedded in the model, the background ocean state, the number of 20-count shrimp per square mile (Just kidding!), atmospheric forcing, inter-annual and multi-decadal variability and even whether atmospheric deposition was incorporated into the model.
Like I said before, the West Coast will probably not see more than 20 Bq/m3 of radiation. Compare these values to the map of background radiation of Cesium-137 in the ocean before Fukushima (from 1990). Radiation will increase in the Pacific, but it’s at most 10 times higher than previous levels, not thousands. Although looking at this map I would probably stop eating Baltic Herring fish oil pills and Black Sea Caviar (that radiation is from Chernobyl) before ending the consumption of  fish from the Pacific Ocean. 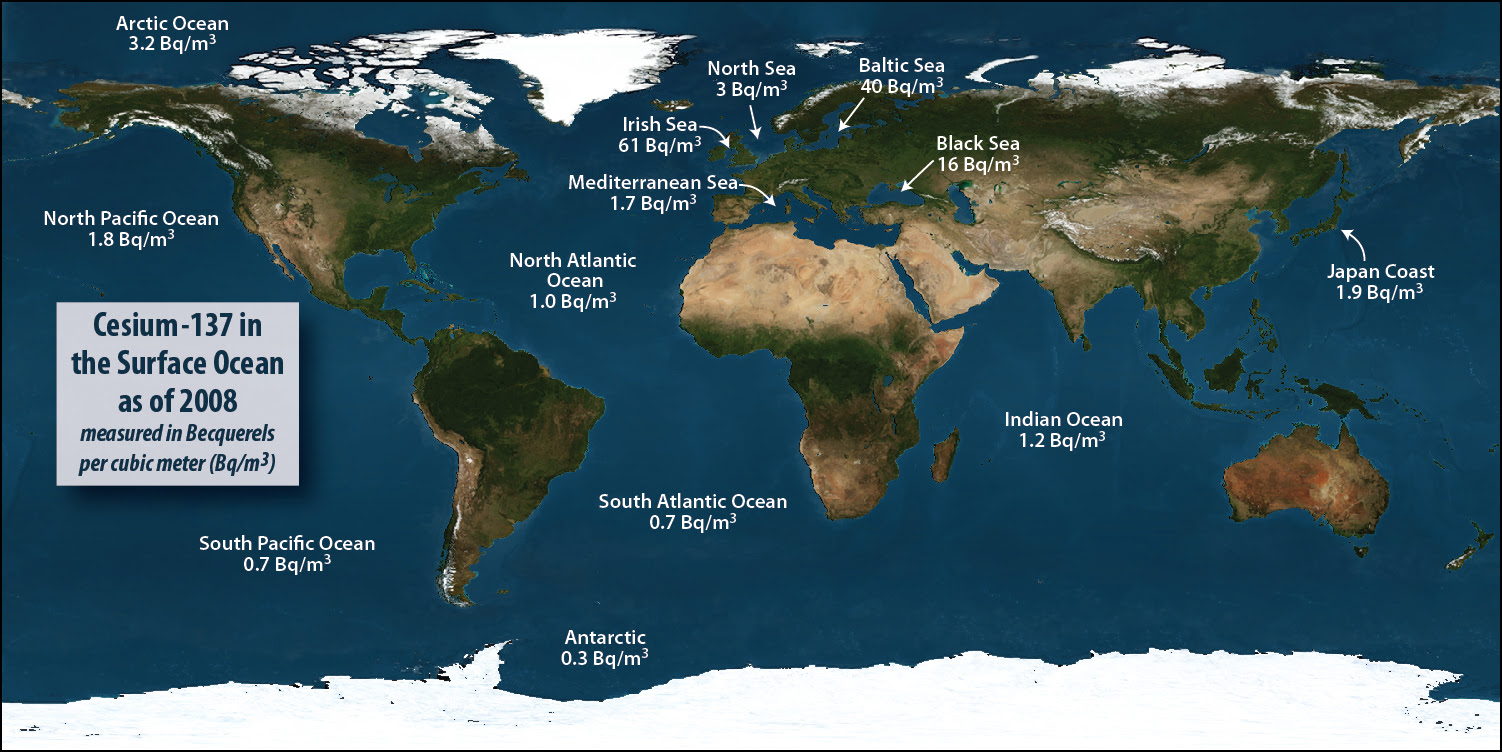 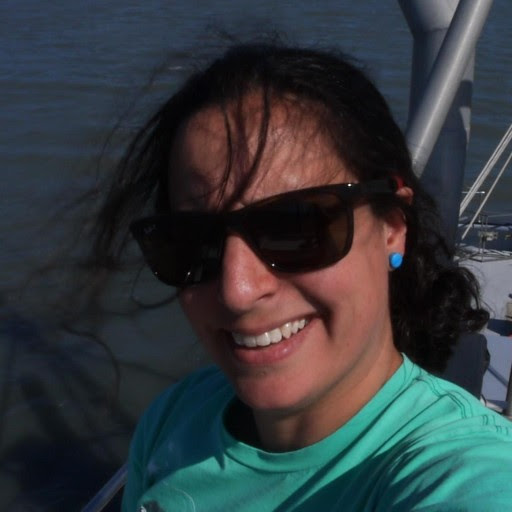 Kim Martini (66 Posts)
Kim is a Physical Oceanographer at the Joint Institute for the Study of Atmosphere and Ocean at the University of Washington. She received her Ph.D. from the University of Washington in 2010. Her goal in life is to throw expensive s**t in the ocean. When not at sea, she uses observations from moored, satellite and land-based instruments to understand the pathways that wind and tidal energy take from large (internal tides) to small scales (turbulence).

Guest
OK, so what about all the melting starfish and dead sea life? People making this up too? Locally we have practically lost our bald eagle population. Radiation or chemtrails?

is making me Out of My Mind!!! hahaha

Guest
I went to the blog where this article appeared and tried to discern what type of source this was. It's very mainstream, full of "experts" who study marine biology (Motto: We don't know why fish throw themselves on the beach all the time!) in college and haven't yet realized they've also been taken for a ride. But as a birdwatcher for ten years in eagle country, I can tell you for a fact... our eagles are gone. I can't tell you why they are gone, but they are gone. Are they the canary in the coalmine? Likely. They almost disappeared due to DDT back in the 1980's and someone figured it out just in the nick of time and DDT was banned. That was then, this is now and I see nothing on the horizon that's going to bring the eagles back any time soon. Once they're gone, that's the end of the American symbol. How symbolic!

Also stated that the 100000 dead blackbirds, which was accompanied with pics, a few days back was a hoax.

It is just so obvious!!! Almost to the point of insulting!!

Guest
Yeah, I read that too. Pfft. West Nile is spread by mosquitoes. Last year we had no mosquitoes here at all and in fact it was quite astounding to have not a single mosquito all summer. Not one. Yes, it's insulting. It seems that scientists and "experts" are nothing but paid mouthpieces like journalists, so they are telling us it's fine to eat sushi "because we say so!" all the while using the Simpson Guide to Radiation because we're all so F'in stupid and it's the only way we can understand how smart they are. Pfft.