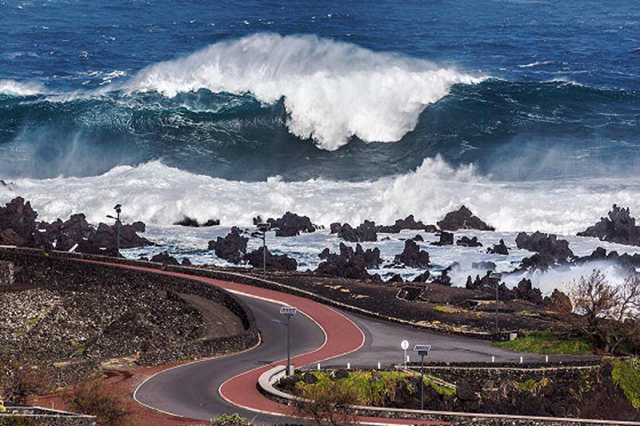 6 January 2014 (Surfer Today) – The “Black Swell” is hitting UK, Ireland, and Portugal. Huge waves have been spotted, as the storm passes through the Azores Islands and heads to Continental Europe.
The black fetch is wide, fast and furious. The swell charts don’t lie. The eye of the storm is larger than the territory of France and the wave period reaches 25 seconds.
While the Eastern American surfers face record-breaking low temperatures, the Old Continent gets ready for the worst hours of the last decade, at least, in the coastal regions.
Winter Storm Hercules is responsible for swells in excess of 60 feet. The Azores Islands have already felt the power of the Atlantic, with massive walls of water hitting the Portuguese archipelago during weekend.
“The biggest storm I have seen on maps”, says Maya Gabeira, the stunt-woman who has ridden the largest wave ever by a female surfer, at Praia do Norte, Nazaré.
This historic swell comes with heavy rain and winds blowing in the 40-knot mark. On Sunday, 5 January, 2014, a few big wave surfers have already tasted the power of the “Black Swell”, in the iconic surf town of Peniche.
In the British Islands are suffering the worst floods in decades. Strong winds, persistent rain and tidal surges are synonym of ultra low pressures.
Only experienced big wave surfers may hit the waves. Protect yourself from the huge swell, and stay away from the incoming waves.
Check the wave height forecast for the Atlantic, Portugal, and the British Islands. 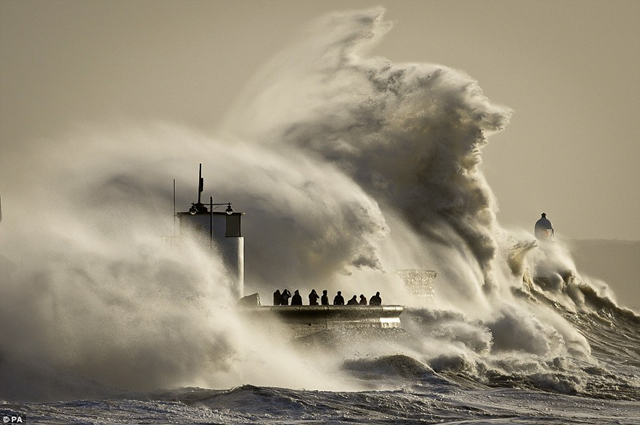 By Mark Duell
6 January 2014
(Daily Mail) – Britain was again being battered by strong winds and 50ft waves today, as forecasters revealed that last month was the stormiest December since 1969.
The Environment Agency has issued 320 flood warnings or alerts – including three severe warnings in Dorset, where there is ‘significant risk to life’.
The Met Office issued a ‘be aware’ yellow warning for wind as gusts of up to 70mph are expected on the west and south-west coast of Britain today.
Forecasters said this will cause ‘exceptionally high waves’. Heavy rain fell across much of Britain last night, with up to 1.6 inches expected on higher ground.
Surfers have reportedly flown in from the US to follow a deep depression across the Atlantic dubbed Winter Storm Hercules, hoping to catch big waves.
And other thrill-seekers were still risking their lives to storm-watch, defying guidance from police and the EA to stay away from dangerous coastlines.
The EA estimates 220 properties have been flooded so far as miles of coastline are battered and roads and fields across the country are under water.
Residents and shop owners on the seafront of Aberystwyth, Ceredigion, were being told to leave their properties because of fears over more flooding.
Waves of 27 feet have been recorded at Land’s End and the storm was causing disruption for many people returning to work after the Christmas break. [more]