OUT OF MIND » THE INSANITY OF REALITY » FINANCIAL COLLAPSE » Lies, Damned Lies, and Banks: Deutsche Bank’s Whitewash Of “Senior Management”

Nations held hostage by liars and the lies of Banksters, are no longer free nations governing people or serving the needs of their people. Instead nations are held captive by "too big to fail" banks until the banks fail just as rotten apples ruin the bushel. At that point, nations learn they served the wrong constituents as Banksters always leave the mug politicians to face the music of an angry mob all alone while they escape, as history shows they have done before. 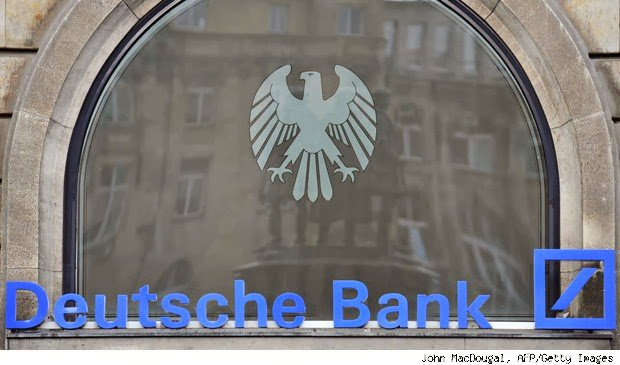 Germany has its own JP Morgan, the bank that could do no wrong and got bailed out by the Fed and the taxpayer while CEO Jamie Dimon walked on water with a nimbus above his head, at least in the eyes of the government. Until the layers of obfuscation came off. What emanated was the acrid stench of internal putrefaction. Now the fines and settlements are piling up in the tens of billions of dollars.

The same acrid stench of internal putrefaction has been emanating from Deutsche Bank, arguably the most powerful institution in Germany, and one of the most precarious, long coddled by the government and once unassailable by politicians. It too has been mired in a swamp of scandals, investigations, lawsuits, fines, and settlements.

Just last Wednesday, the European Commission fined the largest banks involved in the Libor rate rigging scandal $1.7 billion, of which Deutsche Bank got hit with the lion’s share of €725 million ($1 billion). The bank's long résumé includes the carbon-trading tax-fraud scandal that broke with a televised raid by 500 police officers on its headquarters. It had known for years about the havoc commodities speculation wreaked on food prices, and on people in poor countries, but had lied to the German Parliament about it [Lies, Damned Lies, And Banks: Deutsche Bank Caught Again].

Now a letter from Germany’s Federal Financial Supervisory Authority (BaFin) to Paul Achleitner, chairman of Deutsche Bank’s Supervisory Board, was leaked to the Spiegel. It blasted the bank’s internal investigation into senior management’s role in the Libor manipulations; the bank’s report, dubbed “Senior Management Review” (SMR), was a whitewash.

OUT OF MIND » THE INSANITY OF REALITY » FINANCIAL COLLAPSE » Lies, Damned Lies, and Banks: Deutsche Bank’s Whitewash Of “Senior Management”