Admin
Posts : 106821
Join date : 2012-01-04
Location : Woodstock Nation
It was a glorious morning in late August when me and my friends went mushroom hunting in the meadows in the outskirts of my place in Mexico. We searched in the patches of tall grass left uneaten by the cows that looked at us uninterested while ruminating. Hidden inside these tall patches of grass, there were large bodies of cow dung.

Mushrooms feed on cellulose, that is why they grow there. Cellulose is broken down by the cow’s digestive system to facilitate the growth of mushrooms, and it is the excess of nitrogen in the soil around the dung that keeps the cows away from eating the grass.

We collected the mushrooms filled with a mix of veneration and enthusiasm and then proceeded to a nearby forest where we ingested them. I had taken a couple of psychedelics before, but nothing had such a strong effect as these mushrooms. Gradually, geometrical patterns of previous unseen hues and of complicated shapes twirled and tinkled. My body felt a bit like rubber and I was yawning a lot. Everything seemed to breathe and was alive and conscious. When I went into a deeper stage, there was no longer an “I” but a “we” – me, my friends and the forest became a single unity, rejoicing in the mystery of existence. 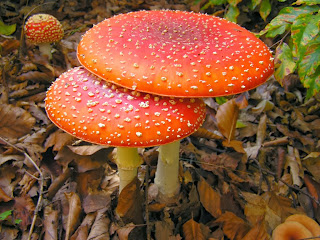 Even though the effect of mushrooms has now long faded away, the insight that I gained from the experience is still with me: I carry it around as precious wisdom. It was a life-changing experience. It really was!

R. Gordon Wasson, an American author and ethnomycologist, played a vital role in spreading awareness of the existence of psychoactive mushrooms to a wide audience. He, like me, was profoundly touched by his first experience with magic mushrooms. It steered his life towards the study of the relationship between mushrooms and humanity (ethno-mycology). He soon discovered that the magic mushrooms, that can be categorized as psychedelics, have a long and important relationship with mankind.

For example, the Aztecs and Mayans incorporated its usage in their rituals of worshiping, divination and even, just for the fun of it. Similarly, the people of Siberia had a religious relationship with the mushroom Amanita Muscaria.

Here in Mexico if you take a look at the 100 peso bill, one can see how the usage of these mushrooms are incorporated into the culture of the inhabitants before the Spanish came. A statue of Xochipilli can be seen on the bill, sitting down, in ecstasy, displaying ominous wise eyes. He is the Aztec god of art, games, beauty and flowers and on his skin we can see the image of various entheogens used by the Aztecs, like the mushroom and other ethnobotanicals.

Wasson got hold of an essay by Richard Shultes, an ethnobotanist and a psychedelic pioneer, where he described the existence of magic mushrooms and of people who were using them in a ritualistic manner. He went to Mexico to pursue the validation of his thesis.

In Huatla, Oaxaca, he met the legendary healer Maria Sabina and attended one of her healing ceremonies called velada (roughly translates into evening event) where he experienced the “childrens” as Maria Sabina called them with affection.

Wasson then published his findings in Life magazine in 1957, featuring him on the cover. This was the moment when the existence of these mushrooms gained attention by the general public. It subsequently sparked interest among many hippies and psychonauts, who traveled to Mexico in pursuit of these magic mushrooms.

Wasson also postulated that an ancient drink called soma, was actually made out of a magic mushroom. As we can see from the following quote, it seems to have given the drinkers many insights and made them have some sort of metamorphosis:

“We have drunk Soma and become immortal; we have attained the light, the Gods discovered.
Now what may foeman’s malice do to harm us? What, O Immortal, mortal man’s deception? (Rigveda (8.48.3))”

Soma is important because it is a crucial source of inspiration for the people who wrote the Vedas, ancient texts that originated in India, making up the oldest scriptures of Hinduism (around 1st century B.C).

The other thesis is described in the book “The Road to Eleusis” (having Albert Hoffman, the discoverer of LSD and C.A.P. Ruck as a collaborators). He makes the hypothesis that a drink called ‘kykeon’ was similarly made out of a fungal parasite of barley called ergot (it contains LSA, the precursor of LSD). Similar to the Soma, this drink allowed people to peek into the after-life. 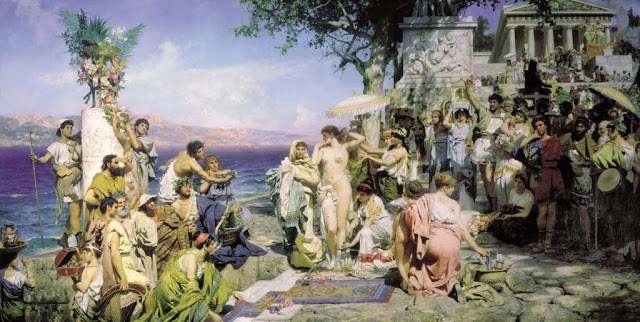 Terence McKenna, another mushroom enthusiast, also hypothesized that the Eleusinian Mysteries took place under the effect of some substance that came from mushrooms (although he thought that they were some sort of Psilocybe kind). He said that the mushroom was not only a part of ancient cultures, but the very reason behind our advanced cognitive capacities.

His theory is often referred as the “Stoned Ape Theory of Human Evolution”. He theorized that the Homo Sapiens stumbled with the species Psilocybe Cubensis and started ingesting. The effects of the mushroom that address fundamental facets help us become Homo Sapiens by modulation, our sense of ego, for example, promoting social bonding; similarly, language, could have triggered something in our psyche that allowed us to reach a fundamentally higher level of communication.

Nowadays psilocybin, one of the main alkaloids that most magic mushrooms have, is being researched for its medical uses. Research has shown that it can certainly help patients with terminal diseases come to terms with life. Also, it can help get rid of depression, anxiety and other unnecessary psychological habits.

Mushrooms are truly wonderful beings. What we usually consider to be a mushroom, for example, the ones we buy in the supermarket, are actually just their fruiting bodies. Their purpose is the dispersing of spores in to its surroundings; but if we look underground, we find that under the fruiting body there are complex networks of interlocking tubular cells called mycelium.

They grow from the mushroom’s spores, and quickly become a happy community of selfless cells that work in harmony towards their goals. Nutrients and cellular compounds travel along these tubular networks to help the growth of mushrooms, aimed at the abortion of further nutrients. Yes, but why would a mushroom put so much of its energy into producing a substance that has no benefit to it?

I like to think that it is their gift to us, in order to open our mind and heart. It is the realization that we can be like mushrooms, to work as a community, that’s what we learn when we eat them. Rather than being separate beings from one another, we are fundamentally united: Interdependence is more important than independence to archive realization in a broader scale. Our actions spread like spores do, let us put some good vibes into it. The cosmic sacrament with magic mushrooms is available to us as a gift from the mushroom kingdom, let us be ready for it, let us allow the mushroom to give us their wisdom!