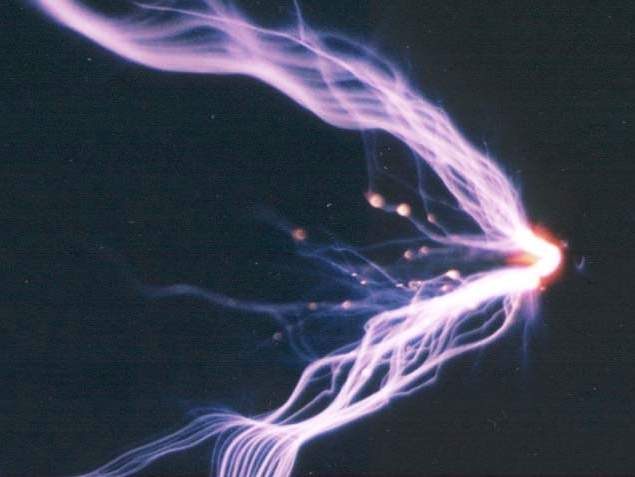 A potential photograph of ball lightning. militarythoughts.blogspot.com
Ball lightning, an atmospheric electrical anomaly that appears as spherical lightning, is currently at the center of attention in parts of the scientific community. One of the most elusive phenomena occurring in nature, ball lightning has finally been recorded due to a stroke of luck. Although thousands of seemingly credible reports of ball lightning have popped up across the planet for many centuries, no one had actually been able to observe and measure the incredible occurrence.  A chance encounter changed all of that.
In July of 2012 Ping Yuan and his team from Northwest Normal University in Lanzhou, China had set up slitless spectrographs (a tool used to capture light from a very narrowly defined region) on the Qinghai Plateau of northwest China. It was supposed to be a run of the mill investigation on lightning that frequents the region.
Related Article: China Launches Moon Rover: Space Age Continues and Why You Should Care 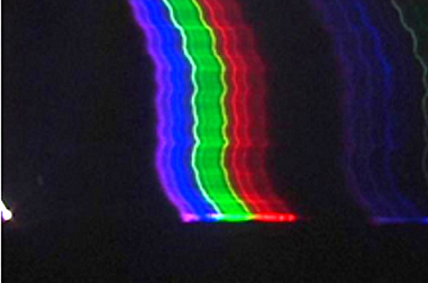 This is a photo of the spectral range of ball lightning. http://physics.aps.org/articles/v7/5
The team got lucky one night when their recording devices captured a spontaneous occurrence of ball lightning 900 meters away.  It was a clear case of being at the right place at the right time, with the right type of spectrograph, filming in the specifically required frequency of the light spectrum to view the event. The team got very, very lucky.
The ball lightning lasted for approximately 1 second. During that second the researchers were able to learn that although the ball was much smaller, its ‘glow’ emitted light 5 meters across.  It also moved horizontally across the ground for 10 meters followed by a 3 meter ascension. Furthermore, it changed from a white to reddish color. Yuan stated that the ball lightning was generated by a cloud-to-ground lightning strike.
Related Article: Lightning Strikes! A Sit and Learn About Lightning
Ball lightning, not to be confused with St. Elmo’s fire, is still an utter mystery. It was, up until the last decade, largely considered a trick of the eye, or rather a global hallucination. And yet, in 1960 more than 5% of the entire global population reported having seen ball lightning at least once in their lives. Reports of ball lightning from the general global populace along with near identical stories from scientifically trained physicists abound. Ball lightning was even frequently reported by soldiers stationed in submarines during WWII. Many soldiers claimed that balls of lightning would sometimes spontaneously be created when they changed batteries in the submarine. All attempts to reproduce ball lightning in a submarine have failed though. 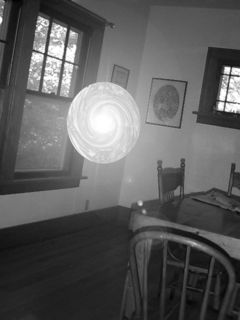 Potential photograph of ball lightning. Seems legit. http://www.yawp.com/
Although there are dozens of plausible scientific explanations, one hypothesis in particular on the generation of ball lightning comes closest to describing the data attained by Yuan and his team. The hypothesis, proposed by John Abrahamson at the University of Canterbury in New Zealand, basically states that,

when lightning hits the ground, the sudden, intense heat can vaporise silicon oxide in the dirt, and a shockwave blows the gas up into the air. If there’s also carbon in the soil, perhaps from dead leaves or tree roots, it will steal oxygen from the silicon oxide, leaving a bundle of pure silicon vapour. But the planet’s oxygen-rich atmosphere rapidly re-oxidises the hot ball of gas, and this reaction makes the orb glow briefly.

For this hypothesis to be accurate, one would expect to see atomic emission lines of silicon and other soil elements in the light spectrum recorded by a spectrograph. That is precisely what Yuan and his team observed.
Related Article: Earthquake Lights: The Mystery has Been Solved
The the ball lighting, according to the spectrum recorded by the researchers, contained several emission lines from silicon, iron, and calcium—all elements that are abundant in soil.  The only element emission line they did not record was that of aluminum, which is also bountiful in soil. However, the emission lines of aluminum could not be recorded due to the limited spectral range their spectrographs were recording in.  For this reason, the lack of aluminum emission lines can’t be used to disprove the validity of the find as it relates to Abrahamson’s hypothesis.

This study is unique because it is the first time scientists have ever recorded naturally occurring ball lightning. According to lightning specialist Martin Uman of the University of Florida in Gainesville,

As for proving Abrahamson’s theory, according to Uman,

This one certainly seems to be made of dirt.

Yuan and his team plan to reproduce the observational conditions and hopefully reconstruct ball lightning in the laboratory.