Aboriginal Elder Speaks Out About Sacred Site Under Threat of Mining

Aboriginal Elder Speaks Out About Sacred Site Under Threat of Mining Wed Jan 22, 2014 8:39 am 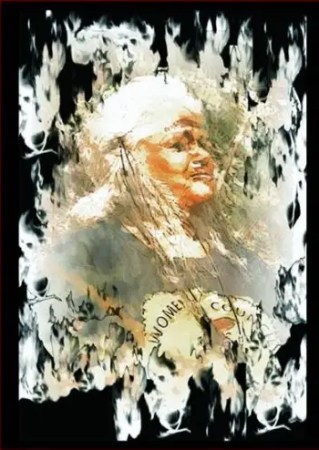 22nd January 2014
By Andy Whiteley
Co-Founder of Wake Up World
Video by Sean Vandenberg
Guest producer for Wake Up World
The NSW State Government has given permission to New Zealand based sandmining company Rocla Materials Pty Ltd to build a sand mine on a sacred Aboriginal Women’s Fertility Rites teaching place in Calga NSW, on Australia’s Central Coast. The site in question is part of the sacred Dreaming Track, and its destruction would destroy with it tens of thousands of years of Aboriginal heritage, as well as the habitat of numerous endangered animal species that are native to the area.
The last female Aboriginal Elder of the area, ‘Auntie’ Beve, has made it her mission to make all Australians (and indeed the world) aware of how significant this loss would be – to help them fully understand the cultural importance of this site to the world’s oldest civilization, and why it must never be destroyed. And she needs your help to do it.
Cultural significance
In this exclusive video presentation, Auntie Beve speaks with fellow custodian Tracey-Lee Howie about the importance of the sacred Women’s Fertility Rites site:

As you can see, the disputed site is sacred to the Original people of this land – particularly the Original women – and should therefore of be of cultural and historical significance to all Australians. It is the site where young Original women were initiated in the ancient rites of fertility and prepared for marriage in Original culture. It is part of the ancient Dreaming Track, the sacred passage of rites that crosses the massive continent of Australia, travelled by Original people for millennia before us. And the desecration of this site would also desecrate of the energy lines of the entire Dreaming Track – an unthinkable outcome for those who understand its cultural value and historical significance.
[For more information, please read Auntie Beve's open letter detailing the importance of this sacred site]
It is a truly powerful connection – the connection between the Original people, the land, the ancestral spirits and their sacred traditional sites. There is no ‘White Fella’ word for it, but that connection is very real. The Original people and the land they walk are energetically one and the same. And by desecrating their ancient sacred sites, it isn’t just the site that is harmed – the Original people and the Spirits of the land are hurt right along with it.
Environmental impacts
Although Rocla Materials development manager John Gardiner said the concerns of residents and the Aboriginal community “has been looked at thoroughly by competent people”, it appears that both Rocla and the local Gosford Council have failed to adequately address the community’s concerns about both cultural and environmental impacts of this proposal.
According to a recent Daily Telegraph report, the President of sustainability project Equilibrium Future Solutions, Ian Sutton, whose expertise is in water matters, said impacts on the area’s water table would put pressure on the already-endangered Spot-Tailed Quoll (pictured below) as well as the area’s hanging swamps, natural waterways, and the other species who rely on them for survival. 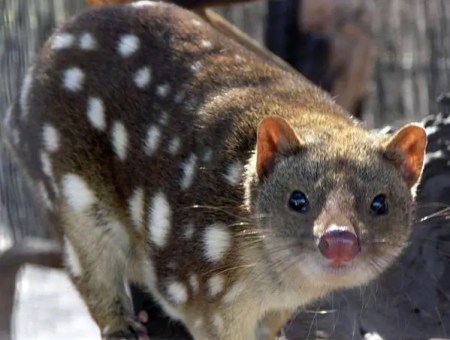 Furthermore, Gosford Deputy Mayor Bob Ward says the release of a council report just before Christmas allowed the local council to avoid scrutiny from the media and the wider community. Councillor Ward says he is “very concerned about the impact of the quarry’s expansion on the community”, and stated that “the report didn’t fully address” issues of “the protection of Aboriginal culture and heritage including Aboriginal women’s engravings, the effect on endangered ecological communities, the damage to the water aquifers, the disastrous impact on the nearby Australia Wildlife Walkabout Park and the problems associated with dust and silica settling on water storage”.
To a reasonable human being (one who isn’t motivated by corporate greed) the destruction of an ancient sacred Aboriginal site and potential damage to the area’s wildlife and environment deserve more consideration than the rubber stamp of a profit-driven state government and an incomplete council report released under the cover of Christmas. And, in the absence of due diligence on the part of government, this proposal must be stopped. Full stop.
Get Involved!
Despite the clear impacts of this proposal, the NSW Government has already given the go-ahead to Rocla Materials and work is due to commence any moment…. so every day counts. Auntie Beve and many members of the local community are working to stop the destruction of this sacred and beautiful land. And with your help, I am quietly confident we can do it.
To voice your opinion on the proposed mining development and help Auntie Beve protect this important ancient ceremonial site, please sign the petition to NSW Premier Barry O’Farrell.
Alternatively, you can contact the NSW Premier and the Ministers for Heritage and Aboriginal Affairs directly:
Barry O’Farrell:
NSW Premier, and Minister for Western Sydney
Phone (02) 9228 5239
Fax (02) 9228 3935
http://www.premier.nsw.gov.au/contact-premier-new-south-wales
Robyn Parker:
NSW Minister for the Environment, and Minister for Heritage
Phone (+612) 9228 5253
Fax (+612) 9228 5763
office@parker.minister.nsw.gov.au
Victor Dominello:
NSW Minister for Citizenship and Communities, and Minister for Aboriginal Affairs
Phone (+612) 9228 4333
Fax (+612) 9228 4392
office@dominello.minister.nsw.gov.au
About the author:

Andy Whiteley is a proud corporate drop-out, co-founder of Wake Up World and an advocate for true systemic change. Andy believes we are on a path (albeit bumpy) to a new social model grounded in love, transparency, sovereignty, sustainability and spirit, and through his role at Wake Up World, he hopes to make a positive contribution to that transition.
Andy currently splits his time between his role as Content Editor for Wake Up World and the beaches of the NSW Central Coast. 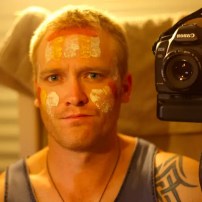 Sean Vandenberg is a long-time member and resident film maker for the Forgotten Origin archaeology team. Sean has a professional background in TV production for the ABC and Foxtel networks in Australia, and has recently extended his work to include documentary production.
Sean is also an able ‘seeker-finder’ and an active participant in the team’s archaeological discoveries. His intuitive nature, and his sensitivity to Original culture and the Spirit world make Sean the only media representative the team – and the Elders who guide them – feel confident taking to the most sacred of sites.

Re: Aboriginal Elder Speaks Out About Sacred Site Under Threat of Mining Wed Jan 22, 2014 8:48 am

Posts : 8269
Join date : 2012-10-03
Age : 54
Location : Australia
Our government are Elite sellout bunch of pricks!! They care nothing for the environment or agriculture, culture,nothing that's important, they are going to dump waste in the Great Barrier Reef ffs!! This is no surprise and if they can't do by law they will write a new law so they can do it! They are off the chain and I hope they get taken down!!