Debunking the Myth of Nostradamus 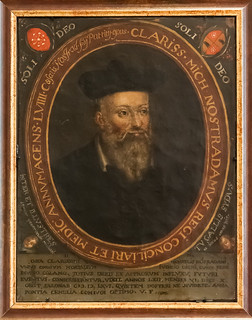 Portrait de Nostradamus , Musée Calvet, Avignon (Photo credit: jacqueline.poggi)
By Morten St. George
I read the works of many of the ancient Greek philosophers in my youth. Those men were intellectually brilliant, even by today’s standards, and I always assumed that they knew that their myths about Zeus and all the other gods were merely fairy tales. Now, I’m not so sure about that. When facing the unknown, the human mind seems to want to accept fiction as reality. Thus, the ancient Greeks may have believed their myths were reflecting events that really occurred.
Mythology did not come to an end in ancient times. As we shall see shortly, it resurfaced in full blossom during the Renaissance in regards to Michel Nostradamus, history’s most famous seer. Today, you can find that mythology all over the Internet, everywhere purporting to be the true history of Nostradamus and his prophecies. I recently googled Nostradamus Predictions 2012 and got nearly one million results. In the late sixteenth and early seventeenth centuries, Nostradamus was just as much of a moneymaking scam as he is today.
Scam artists, then, as now, typically resort to any type of unethical means to make money. Around the turn of the seventeenth century, they did all the following: wrote a fictional biography of Nostradamus, altered or created town and university records to support the fictional biography, republished Nostradamus’ almanacs adding freshly written predictions, wrote unprophetic books and falsely attributed them to Nostradamus, wrote letters and a last will and testament and falsely attributed them to Nostradamus, and published his prophecies backdating those publications to dates within or close to Nostradamus’ time. Beyond the facts to be found on Nostradamus’ original tombstone in Salon and a sprinkling of other information, almost nothing about Nostradamus can be taken for certain. What we think we know about Nostradamus and his prophecies is overwhelmingly mythology.
All of the encyclopedias will tell you that Nostradamus began to publish his prophecies in 1555, often citing the Bonhomme edition that displays this date, but apparently no one ever bothered taking a close look at that edition. In 1594, a charlatan by the name of Chavigny (perhaps also the originator of the fictional biography) altered some of the prophecies to suit his needs. The Bonhomme edition copies those alterations. How could it have been printed in 1555? Meanwhile, Benoist Rigaud, alleged printer of the complete 1568 edition, did indeed print a couple of editions of the prophecies, both dated 1596.
The period following Nostradamus’ death was a time of considerable religious strife in France. Recall the St. Bartholomew’s Day massacre. Superstition was widespread, and if those prophecies were available, both sides would surely have used them for propaganda purposes. But there seems to be no record of any such thing. Many experts have investigated the early history of the prophecies and they have nothing to report. From a reliable source you cannot find a citation of a single verse of any one of the 942 prophecies or even a comment about one of the prophecies. There were references to Nostradamus and his almanacs but not to the prophecies. During Nostradamus’ lifetime and for twenty years thereafter, the famous prophecies were unknown in France.
A breakthrough on the publication mystery began with close scrutiny of some of the earliest genuine publications, namely, the editions of Roger, Rossett, and Menier, all of which were printed in Paris toward the end of the 1580s. These editions contain massive textual alterations, the suppression and replacement of entire stanzas, all in sequences that turn out to tie in integrally with a book called the Sefer Yetzirah. The Sefer Yetzirah, for its part, was the earliest known text of a medieval religion called the Kabbalah.

Français : Michel de Nostredame dit Nostradamus 1503-1566 à Salon-de-Provence. (Photo credit: Wikipedia)
The Kabbalists prospered in the country of Provence, Nostradamus’ homeland, during the age of the troubadours. There was also a large community of Kabbalists in Spain. Toward the end of the fifteenth century, things went badly for the Kabbalists. The Kabbalists of Spain were expelled from that country in 1492, just short of enough time to migrate to the New World. In Provence, now part of France, the Kabbalists were likewise given the option of converting to Catholicism or leaving the country. Unlike their counterparts in Spain, the Kabbalists of Provence had a special reason for remaining in that country. They openly converted to Catholicism but then took the Kabbalah underground. Catholics by day, by night they continued their ancient traditions.
Everything I say about the Kabbalah here is of course pure supposition granted that there is no historical record that an underground religion existed in France during the sixteenth century. But this was the environment in which Michel de Nostredame grew up. It seems Michel was recognized as the most intelligent of the group and hence he was the one appointed to dedicate his life to the study of the ancient texts of the Kabbalah.
One of Nostradamus’ brothers was a grain dealer (the traditional business of the Nostredame family) who made regular trips to Egypt. Others in the community may have also been merchants, likewise pitching in to help support Nostradamus. There is evidence that on one of his trips to Egypt, Nostradamus’ brother brought back with him an enthusiastic youth by the name of Isaac Luria, who aspired to study the Kabbalah under Nostradamus. Luria came from a wealthy family and may have provided additional financial support for Nostradamus.
This brings us to the greatest of all the Nostradamus myths, which is the myth that Nostradamus wrote a book of astrological predictions. Not quite. Nostradamus’ book is a religious text, only published under the disguise of astrology for self-protection. I’ll clarify that: the famous book of prophecies simultaneously incorporates and masks the translation of an ancient text that, like the Quran for Muslims, was the central text of a religion. That ancient text, entailing the foundations of the religion, was sometimes referred to as the Book of Light and sometimes as the Revelations of Elijah. There are indications that the word ‘Kabbalah,’ ‘the receiving,’ now the name of the entire religion, was in earlier times the foremost name of the book that Nostradamus’ book conceals.
Article Source: http://www.articlesbase.com/kabbalah-articles/debunking-the-myth-of-nostradamus-5207156.html
About the Author
Morten St. George is the author of the Nostradamus-related book Incantation of the Law Against Inept Critics and the creator a website about Nostradamus et la Kabbale. His website includes the Nostradamus textual variants of the Paris editions and other technical support for the themes of this article.