The Probable Connection Between UFOs And Earthquakes

The Probable Connection Between UFOs And Earthquakes Sat Jan 25, 2014 8:31 pm 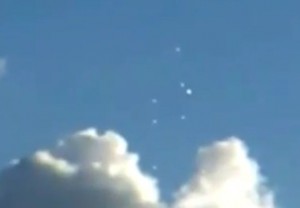 The Connection Between UFOs And Earthquakes
The above image is from an article that says there has been an increase in Japan UFO sightings… fits the theory, that the beings inside the ufos, are guiding humanity to become aware of certain changes.
… and it seems this theory isn’t news to some….
UFO sightings over Japan predicted in secret British alien report files
BRAY’ POINT – Confirmed reports of UFOs “hovering” and thousands of “flashing lights” over the epicenter of Friday’s main earthquake in Japan – located off Miyagi Prefecture, about 230 miles northeast of Tokyo – and UFO’s spotted near Osaka and Yokohama, are predicted in the recent British government release of 8,500 pages of secret unidentified flying object (UFO) reports that point to 60 years of UFO sightings “during times of world crisis.”
According to Japan’s Kyodo News Agency and other Japanese media, there’s been hundreds and upwards of “thousands of UFO sightings” over the country since Friday’s 8.9 magnitude earthquake. Also, video footage from the news channel NHK World English and personal videos show a UFO speeding with bright lights in the sky and then skimming over the Pacific near the quake zones in Japan. The UFO sighting videos have been show on regional TV and the Internet since Friday, with the world UFO community noting “strange light trails following the UFO’s over Japan.”
http://www.huliq.com/10282/ufo-sightings-over-japan-predicted-secret-british-alien-report-files

What Can The General Public Do?
Basically share awareness, and look for connections… be aware of UFO sightings… and your intuition… for both may guide you to someplace unexpected… many in high earthquake zones, might rather die, than move, and those of us among the living, are simply to accept everything that is coming… blessings to you, the ones who are awakening, and becoming aware…. for you bless the world around, who has lost the way to Creator.
May mother earth’s cleansing continue with humanity’s complete support.
The Probable Connection Between UFOs And Earthquakes
Our star family is guiding us to comprehend the earth changes… they remain behind the veil of our awareness, and are becoming more present in our lives… helpful of course… not demons…  no we are not under attack, our planet is under quarantine due to planetary and personal ascension… which is the raising of frequencies, until a quantum shift into a new reality… a fifth dimensional reality.  Most of humanity are manipulated into a physical sensory-based reality, and thus have little spiritual awareness.  The spirit world is the cause of all things physical, not the other way around.  Many earthquakes are natural and many are influenced by manmade technology controlled by madmen… our star family are ever so allowed, to neutralize the most harmfilled effects of this technology… but they must honour humans freewill and at the same time they will be stepping into our lives with greater presence, because mother earth’s freewill matters more than any humans right now… enjoy and share in the cleansing and renewal… mother earth is shifting her landmasses… and will continue until her surface is completely restored… suspend disbelief at this time to limit Creator and God of this universe… to limit yourself, or any being, is to not be present for what is… we are spirit… what you perceive in the physical is but a reflection, of spirit. The journey of ascension is to rediscover the spirit within all including self, as an unlimited being.
IITM

NanneeRose wrote:I love Spock 1ness he's cute as!! I wasn't sure if the guys would like my dragon nymph 1ness LOL!

» UFOs & Mind-Altering Drugs: A Connection?
» UFOs at Volcanoes! Why So Many UFO Sightings Near Erupting Volcanoes & Earthquakes?
» "As early as Thursday; weekend is most probable and everyone at the table wanted by July 1st anyway."
» How Deep is the Rabbit Hole?? “An American Affidavit of Probable Cause” by: Anna Maria Riezinger & James Clinton Belcher
» Richard Dolan Media Repression of UFOs: The Past and the Future on UFOs the Big Picture.