The Pineal Gland and the Age of Aquarius

Admin
Posts : 106253
Join date : 2012-01-04
Location : Woodstock Nation
The Pineal Gland and the Age of Aquarius
By Laron
By a transients.info Anonymous guest writer

The Mysterious Pineal Gland, eh?  Modern scientists still admit to not yet fully understanding its functions…..

Yet, in more advanced cultures, there is a far deeper - if different - understanding of this mystery gland.  For centuries, it has been regarded as the ‘Seat of the Soul’, a ‘Third Eye’, and the physical bodies’ link to the higher frequencies of the Universe - intuition, spirituality and higher dimensions.

The ancient and the modern views are not mutually exclusive.  They are just different perspectives, and each, in its’ place and timeline, is correct. 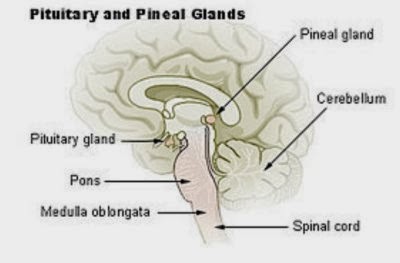 Taking the modern view first, perhaps the highest-profile aspect is the involvement with the endocrine system;  specifically the production of melatonin, our front line in the battle with infections.  Interestingly, the Pineal gland is locked into circadian rhythms, and can, in a sense ‘see’ - i.e, it is light-sensitive, just like an eye.  In fact, even its physical structure contains similar components to the human eye.

The New World Encyclopedia covers this simply and well:
http://www.newworldencyclopedia.org/entry/Pineal_gland
And this article leads us to similar information, but with a different perspective:
http://www.theepochtimes.com/n3/457297-we-all-have-three-eyes-one-of-them-is-inside-the-head/

The more ancient view is usually believed to be based in Eastern Mysticism, but in fact, Shamanic beliefs almost everywhere acknowledge the ‘Third Eye’, even to the knowledge of its affinity with DMT.  From the Amazon jungle to Tibet to the Native Americans, and many more peoples, the pineal (by whatever name) was known…  even without telephones, the WWW, or TV!

The pineal gland is so called because of its shape - it is similar to a pea-sized pine cone.  It is an odd fact that even at the seat of Christianity, the pineal gland is respected, even if subtly ignored -  I quote from a blog here -
http://www.theothersideofthecoconut.com/2012/05/17/vatican-city-and-the-giant-pinecone/
“During my studies I discovered  the symbolic meaning of the pinecone is to represent the Pineal gland, which (as some of you know) controls the melatonin in your body and is shaped like a pinecone, hence the name. Some also call it the “third eye”. Why then, is it present in the Vatican City? What kind of meaning do they (the church) tie to it? 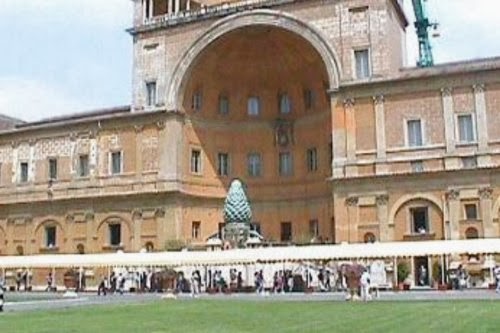 Our “Pine”al Gland, is at the geometric center of our brain and is intimately linked to our body’s perception of light. The Pineal modulates our wake-sleep patterns and circadian rhythms, remains uniquely isolated from the blood-brain barrier system, and receives a higher percentage of blood flow than any other area of the body save the kidneys.

It is considered by many to be our biological Third Eye, the “Seat of the Soul,” the “Epicenter of Enlightenment” — and its sacred symbol throughout history, in cultures around the world, has been the pinecone.” (End quote)

So how incongruous is it to have a huge pine cone cast in brass, in a courtyard of its own, in the Vatican - the seat and base of the very antithesis of spiritual knowledge?

The observant will notice many other ‘pine cones’ in religious and state regalia…. watch staffs, crooks, crowns and ornaments….

So, why on Earth (or elsewhere) would a religion - or in this case, all three of the Abrahamic religions particularly - want to deny people a ‘key’ to awareness of their spirituality?  The potential to become aware of the Universal Field?  The first step in ability for empathy, telepathy, awareness, and intuition?  Why would they mock Eastern practices?

I won’t insult your intelligence by answering that!

So, simply applying logic, it would appear that full knowledge of the use/application/potential of our pineal gland is seen as a threat to the Establishment.

So much so, that we have coincidences occurring like the mass fluoridation of our drinking water, to maybe achieve some minute benefit in terms of dental health - and the collective calcification of our pineal glands.
http://www.naturalnews.com/026364_fluoride_pineal_gland_sodium.html
http://www.infowars.com/the-effect-of-fluoride-on-the-pineal-gland/

And, like the prolific spread of microwave radiation frequencies, (WiFi) which (among other effects) limits the ability of the pineal gland to produce melatonin, laying us all open to disease, including cancers.
http://www.wakingtimes.com/2012/11/20/effects-of-electromagnetic-fields-on-the-pineal-gland/
http://cellphonesafety.wordpress.com/2006/09/26/what-is-emf-exposure/

OK, now let’s leave the boring old facts, and sneak off into the more exciting territory of speculation……

Here we are in 2014, a couple of years into the Age of Aquarius - which, in case you wondered, is perfectly astronomically legitimate!  Now, if we assume that each of these 5,125 year cycles has an individual unique energy - as is described by many schools of thought - what if the Age of Aquarius is complimentary to the pineal gland?  What if the new energies / cosmic area that we are slowly moving into resonate with our pineals - and will eventually (hopefully) over-ride the negative influences that presently affect them?

Would that be the ‘Ascension’, the ‘Awakening’, the ‘Resurrection’, the ‘Activation’ that so many people believe is about to change the world?  That slowly - it would not be an ‘overnight’ event - we would start to become aware of our intuition, our energetic connection to and with each other, our connection with the energy of the Universe……..  Our abilities to utilise that connection for the benefit of ALL humanity…. and the planet under our feet….

Of course, that would not particularly delight the ‘upper crust’ - the 1% who own near 50% of the wealth of the planet…. The Presidents, Popes, corporatists and royalty …..

Hopefully, they’d get used to the idea over time……  though I doubt they’d be very happy about it.  Global empathy, true equality, and love instead of fear as the ruling parameter? That sounds unlikely to suit their ideals, characters or life-styles very well!

What sort of ‘pattern’ would we observe, if this bit of speculation materialised?

I would imagine that the people who are already aware of the potentials available would notice it fIrst.  Their ‘instincts’, their intuition would become more and more fine-tuned and reliable.  Then, on an ascending curve, their empathy and awareness of others’ motivations, trustworthiness and so on would climb, along with their ability to ‘make connections’ between random events and information.  Who could guess the limits?

At the other extremity, those focussed 100% in the 3-D physical, ‘to-hell-with-you-I’m-alright-Jack’ would be having a rather disconcerting time, I would imagine - not having any point of reference with which to ground themselves. A great deal of fear and ‘I’m going mad!’ feelings would probably emerge…  and a similar, parallel, or even worse scenario would evolve among the religious dogmatists.

In between those two extremes, well - graduations of the same, probably.

The ‘elite’?  I’d bet they would be too busy spitting chips because in spite of their resistance and meddling to maintain their comfy and controlling status quo, the Universe insisted on this evolution going ahead anyway! I would imagine that their pineals are in some way already ‘fireproofed’.

Amusing speculations, nothing more.  As far as we are aware….. don’t you think?

To wind up - meditation is a very healthy practice, mentally speaking.  Physically beneficial, as well!  So try to make this a practice when you meditate - visualise (‘see’) a small shining light, back of your forehead, or if you want to be biologically correct, in your mid-brain.  See it twinkling there, and growing brighter each time.  Feed it, give it energy and strength.

You may just be amazed at the way it rewards your attention…….

Posts : 983
Join date : 2013-03-22
Location : Mother Earth
Great read !! I have ask many a catholic, HEY why the giant pine-cone. Not one could answer that one. When I would explain it and tell them about Buddha heads I would get that gazing stare like your crazy dude.