OUT OF MIND » VOICES CARRY » MUZIC ZONE » R.I.P. our beloved Pete Seeger, who taught us that “The key to the future of the world is finding the optimistic stories and letting them be known.”

R.I.P. our beloved Pete Seeger, who taught us that “The key to the future of the world is finding the optimistic stories and letting them be known.”

R.I.P. our beloved Pete Seeger, who taught us that “The key to the future of the world is finding the optimistic stories and letting them be known.” Tue Jan 28, 2014 12:02 pm

Admin
Posts : 102395
Join date : 2012-01-04
Location : Woodstock Nation
R.I.P. our beloved Pete Seeger, who taught us that “The key to the future of the world is finding the optimistic stories and letting them be known.”
Posted on January 28, 2014 by Ann Kreilkamp

Pete Seeger, Songwriter and Champion of Folk Music, Dies at 94 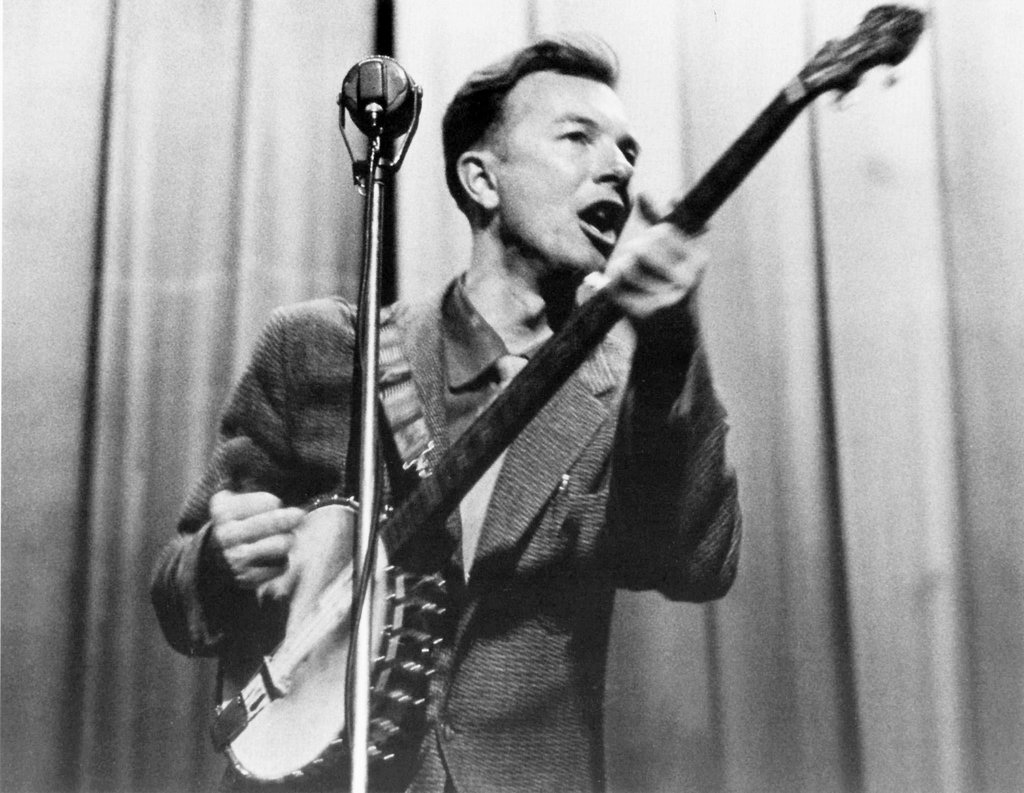 Mr. Seeger was signed to a major label, Columbia Records, in 1961, but he remained unwelcome on network television. “Hootenanny,” an early-1960s show on ABC that capitalized on the folk revival, refused to book Mr. Seeger, causing other performers (including Bob Dylan, Joan Baez and Peter, Paul and Mary) to boycott it. “Hootenanny” eventually offered to present Mr. Seeger if he would sign a loyalty oath. He refused.

He toured the world, performing and collecting folk songs, in 1963, and returned to serenade civil rights advocates, who had made a rallying song of his “We Shall Overcome.”
Like many of Mr. Seeger’s songs, “We Shall Overcome” had convoluted traditional roots. It was based on old gospel songs, primarily “I’ll Overcome,” a hymn that striking tobacco workers had sung on a picket line in South Carolina. A slower version, “We Will Overcome,” was collected from one of the workers, Lucille Simmons, by Zilphia Horton, the musical director of the Highlander Folk School in Monteagle, Tenn., which trained union organizers.
Ms. Horton taught it to Mr. Seeger, and her version of “We Will Overcome” was published in the People’s Songs newsletter. Mr. Seeger changed “We will” to “We shall” and added verses (“We’ll walk hand in hand”). He taught it to the singers Frank Hamilton, who would join the Weavers in 1962, and Guy Carawan, who became musical director at Highlander in the ‘50s. Mr. Carawan taught the song to the Student Nonviolent Coordinating Committee at its founding convention.
The song was copyrighted by Mr. Seeger, Mr. Hamilton, Mr. Carawan and Ms. Horton. “At that time we didn’t know Lucille Simmons’s name,” Mr. Seeger wrote in his 1993 autobiography, “Where Have All the Flowers Gone.” All of the song’s royalties go to the “We Shall Overcome” Fund, administered by what is now the Highlander Research and Education Center, which provides grants to African-Americans organizing in the South.
Along with many elders of the protest-song movement, Mr. Seeger felt betrayed when Bob Dylan appeared at the 1965 Newport Folk Festival with a loud electric blues band. Reports emerged that Mr. Seeger had tried to cut the power cable with an ax, but witnesses including the producer George Wein and the festival’s production manager, Joe Boyd (later a leading folk-rock record producer), said he did not go that far. (An ax was available, however. A group of prisoners had used it while singing a logging song.)
As the United States grew divided over the Vietnam War, Mr. Seeger wrote “Waist Deep in the Big Muddy,” an antiwar song with the refrain “The big fool says to push on.” He performed the song during a taping of “The Smothers Brothers Comedy Hour” in September 1967, his return to network television, but it was cut before the show was broadcast. After the Smothers Brothers publicized the censorship, Mr. Seeger returned to perform the song for broadcast in February 1968.
During the late 1960s Mr. Seeger started an improbable project: a sailing ship that would crusade for cleaner water on the Hudson River. Between other benefit concerts he raised money to build the Clearwater, a 106-foot sloop that was launched in June 1969 with a crew of musicians. The ship became a symbol and a rallying point for antipollution efforts and education.
In May 2009, after decades of litigation and environmental activism led by Mr. Seeger’s nonprofit environmental organization, Hudson River Sloop Clearwater, General Electric began dredging sediment containing PCBs it had dumped into the Hudson. Mr. Seeger and his wife also helped organize a yearly summer folk festival named after the Clearwater.
In the ‘80s and ‘90s Mr. Seeger toured regularly with Arlo Guthrie, Woody’s son, and continued to lead singalongs and perform benefit concerts. Recognition and awards arrived. He was elected to the Songwriters Hall of Fame in 1972, and in 1993 he was given a lifetime achievement Grammy Award. In 1994, President Bill Clinton handed him the National Medal of Arts, America’s highest arts honor, given by the National Endowment for the Arts. In 1999, he traveled to Cuba to receive the Order of Félix Varela, Cuba’s highest cultural award, for his “humanistic and artistic work in defense of the environment and against racism.”
In 1996, Mr. Seeger was inducted into the Rock and Roll Hall of Fame as an early influence. Arlo Guthrie, who paid tribute at the ceremony, mentioned that the Weavers’ hit “Goodnight, Irene” reached No. 1, only to add, “I can’t think of a single event in Pete’s life that is probably less important to him.” Mr. Seeger made no acceptance speech, but he did lead a singalong of “Goodnight, Irene,” flanked by Stevie Wonder, David Byrne and members of the Jefferson Airplane.
Mr. Seeger won Grammy Awards for best traditional folk album in 1997, for the album “Pete,” and in 2009, for the album “At 89.” He also won a Grammy in the children’s music category in 2011 for “Tomorrow’s Children.”
Mr. Seeger kept performing into the 21st century, despite a flagging voice; audiences happily sang along more loudly. He celebrated his 90th birthday, on May 3, 2009, at a Madison Square Garden concert — a benefit for Hudson River Sloop Clearwater — with Mr. Springsteen, Dave Matthews, John Mellencamp, Joan Baez, Ani DiFranco, Roger McGuinn of the Byrds, Emmylou Harris and dozens of other musicians paying tribute. In August he was back in Newport for the 50th anniversary of the Newport Folk Festival.
Mr. Seeger’s wife, Toshi, died in 2013, days before the couple’s 70th anniversary. Survivors include his son, Daniel; his daughters, Mika and Tinya; a half-sister, Peggy; and six grandchildren, including the musician Tao Rodriguez-Seeger, who performed with him at the Obama inaugural. His half-brother Mike Seeger, a folklorist and performer who founded the New Lost City Ramblers, died in 2009.
Through the years, Mr. Seeger remained determinedly optimistic. “The key to the future of the world,” he said in 1994, “is finding the optimistic stories and letting them be known.”
Gerry Mullany contributed reporting from Hong Kong, and Emma G. Fitzsimmons from New York.

Re: R.I.P. our beloved Pete Seeger, who taught us that “The key to the future of the world is finding the optimistic stories and letting them be known.” Tue Jan 28, 2014 12:39 pm

OUT OF MIND » VOICES CARRY » MUZIC ZONE » R.I.P. our beloved Pete Seeger, who taught us that “The key to the future of the world is finding the optimistic stories and letting them be known.”