Posted on February 2, 2014 by Deus Nexus Leave a comment

Reposted from: Waking Times
by Karol Jankowiak
Solfeggio frequencies make up the ancient 6-tone scale thought to have been used in sacred music, including the beautiful and well known Gregorian Chants. The chants and their special tones were believed to impart spiritual blessings when sung in harmony. Each Solfeggio tone is comprised of a frequency required to balance your energy and keep your body, mind and spirit in perfect harmony. 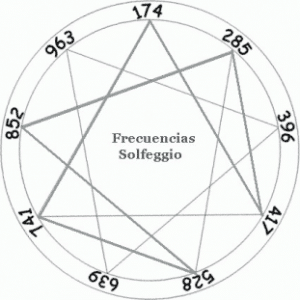 The main six Solfeggio frequencies are:
396 Hz – Liberating Guilt and Fear
417 Hz – Undoing Situations and Facilitating Change
528 Hz – Transformation and Miracles (DNA Repair)
639 Hz – Connecting/Relationships
741 Hz – Expression/Solutions
852 Hz – Returning to Spiritual Order
Where do these tones come from?
According to Professor Willi Apel, the origin of the ancient Solfeggio scale can be traced back to a Medieval hymn to John the Baptist. The hymn has this peculiarity that the first six lines of the music commenced respectively on the first six successive notes of the scale, and thus the first syllable of each line was sung to a note one degree higher that the first syllable of the line that preceded it. Because the music held mathematic resonance, the original frequencies were capable of spiritually inspiring mankind to be more “god-kind”.
The original Solfeggio scale was developed by a Benedictine monk, Guido d’Arezzo (c. 991 AD – c. 1050 AD). It was used by singers to learn chants and songs more easily. Today we know the Solfeggio scale as seven ascending notes assigned to the syllables Do-Re-Mi-Fa-So-La-Ti. The original scale was six ascending notes assigned to Ut-Re-Mi-Fa-Sol-La. The syllables for the scale were taken from a hymn to St. John the Baptist, Ut Queant Laxis, written by Paulus Diaconus.
In the mid-1970’s Dr. Joseph Puleo, a physician and America’s leading herbalist, found six electro-magnetic sound frequencies that corresponded to the syllables from the hymn to St. John the Baptist.
How were the frequencies discovered?
According to the documentation provided in “Healing Codes for the Biological Apocalypse“, Dr. Joseph Puleo was introduced, through an open vision, to the Pythagorean method of numeral reduction. Using this method, he discovered the pattern of six repeating codes in the Book of Numbers, Chapter 7, verses 12 through 83.
The Pythagorean method is a simple reduction method, used to turn big numbers into single digits. The values of all digits in the number are added up. When after the first addition the number still contains more than one digit, the process is repeated.
Here’s an example:
456 can be reduced to 4+5+6 = 15, and subsequently reduced to 1+5=6. So the number 456 reduces eventually to the single digit 6.
Dr. Joseph Puleo found repetitions of a single issue or subject in the Book of Numbers. In Chapter 7, verse 12 he found a reference to the first day, the second day was mentioned in verse 18, the third day in verse 24, and so forth until the final reference in verse 78 which is speaking of the twelfth day.
The Pythagorean reduction of these verse numbers is:
Verse 12 = 1 + 2 = 3
Verse 18 = 1 + 8 = 9
Verse 24 = 2 + 4 = 6
Verse 30 = 3 + 0 = 3
Verse 36 = 3 + 6 = 9
Verse 42 = 4 + 2 = 6
…until verse 78
Do you see the repetition of 396? This is the first frequency.
He found the next frequency by looking at verse 13, which is speaking of an offering. Six verses down, which is verse 19, the same offering or idea is repeated, six verses down at verse 25 there is another repeat, etc. Thus, by using the Pythagorean method of reduction, again he discovered a pattern. This pattern is 417. It is the second frequency. The rest of the frequencies were found using the same method.
The secret meanings of the ancient syllables
As you already know, the syllables used to denote the tones are: Ut, Re, Mi Fa, Sol, La. They were taken from the first stanza of the hymn to St. John the Baptist:

“In order that the slaves might resonate (resound) the miracles (wonders) of your creations with loosened (expanded) vocal chords. Wash the guilt from (our) polluted lip. Saint John.”

In other words, so people could live together in peace and communicate in harmony about the miracle in their lives, and how God blessed them to produce this “magic”, people’s true unpolluted spiritual natures required revelation. The above text seems to suggest that Solfeggio notes open up a channel of communication with the Divine.
Each syllable was thoroughly studied by Dr. Puleo and other professional researchers. David Hulse, a sound therapy pioneer with over 40 years of experience, described the tones as the following:

Click here for detailed description of each tone.
Why the modern world forgot about them
The Solfeggio frequencies were lost because throughout history different tuning applications have been used. Ancient tuning practices used a system of tuning known as “Just Intonation.” The method of Just Intonation featured pure intervals between every note that were mathematically related by ratios of small whole numbers leading to a much purer sound.
The tuning practice adopted for western cultures from about the 16th century and used today is known as “Twelve-Tone Equal Temperament”. According to Joachim Ernst-Berendt, the 12-Tone Equal Temperament mistunes all consonant intervals except the octave. Our modern scale can create situations such ‘boxed-in’ thinking, stuffed and suppressed emotions, fear-based or lack consciousness, all of which then tend to manifest into physical symptoms called ‘dis-ease’ or disease.
Our modern day musical scale is out of sync when compared with the original Solfeggio scale. If we want to bring harmony in our lives, we need to replace the dissonant western scale with a web of subtle and clear intervallic relationships of the Solfeggio music. Let the music become once again a tool to raise human nature and a method to connect you with the Source.
Your secret key to the Universe
Nikola Tesla, the great genius and father of electromagnetic engineering, had once said, “If you only knew the magnificence of the 3, 6 and 9, then you would hold a key to the universe”. The 3, 6, and 9 are the fundamental root vibrations of the Solfeggio frequencies.
Albert Einstein stated: “Concerning matter, we have been all wrong. What we have called matter is energy, whose vibration has been so lowered as to be perceptible to the senses. There is no matter.” All matter beings vibrate at specific rates and everything has its own melody. The musical nature of nuclear matter from atoms to galaxies is now finally being recognized by science.
That is why these frequencies are so powerful. They can literally bring you back to the original tones of the heavenly spheres and put your body into a balanced resonance. Solfeggio music is the key to the Universe. You can either throw it away or you can use it to find healing and harmony, health and well-being. Just play the music!
**This article was originally featured on www.attunedvibrations.com.**
About the Author
Karol Jankowiak is an artist, technologist, independent sound researcher, and educated philosopher. He is the founder of Attuned Vibrations where, along with his wife, he promotes healing sound frequencies and alternative musical tunings. Karol left his successful corporate career to dedicate his life to helping others in transforming their own lives and rediscover their true potential as vibrational beings. Visit his site http://attunedvibrations.com or connect with him on Facebook.
References:
D.D. Hulse, 2009, A Fork In the Road: An Inspiring Journey of how ancient Solfeggio Frequencies are Empowering Personal and Planetary Transformation!, AuthorHouse