Admin
Posts : 108320
Join date : 2012-01-04
Location : Woodstock Nation
New Madrid Showing Continuous Activity! Quakes Tied To Mysterious Booms Now Across 13 States In The Last Two Months!
Posted on February 5, 2014 by Dublinsmick
(Before It’s News)
Mysterious booms tied to earthquakes have now struck in 13 states throughout America within the last two months as shared in this latest video from TheUnitedKnowledge. We learn here that there has been a mysterious boom/earthquake link going back to the 1800′s and we are now building to an undeniable level. Will we soon witness a major event as it seems we’re heading towards? Several of these mysterious booms and quakes have been in the New Madrid region while most of them have been along the East Coast as shown below.

You might notice the areas of quakes pinpointed on the map run through what is called the Ramapo fault line. The Indian Point area is considered a major risk area for an earthquake and it features a nuclear power plant. 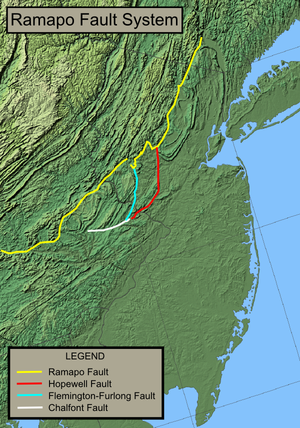 “The Ramapo Fault zone, spanning more than 185 miles (300 kilometers) in New York, New Jersey, and Pennsylvania, is a system of faults between the northern Appalachian Mountains and Piedmont areas to the east.[1] This fault is perhaps the best known fault zone in the Mid-Atlantic region, and some small earthquakes have been known to occur in its vicinity. Recently, public knowledge about the fault has increased, especially after the 1970s, when the fault’s proximity to the Indian Point nuclear plant in New York was noticed.
At well-studied plate boundaries like the San Andreas fault system in California, scientists can often make observations that allow them to identify the specific fault on which an earthquake took place. In contrast, east of the Rocky Mountains this is rarely the case.[10] The NYC area is far from the boundaries of the North American plate, which are in the center of the Atlantic Ocean, in the Caribbean Sea, and along the west coast of North America. The seismicity of the northeastern U.S. is generally considered to be due to ancient zones of weakness that are being reactivated in the present-day stress field. In this model, pre-existing faults that were formed during ancient geological episodes, persist in the intraplate crust, and the earthquakes occur when the present-day stress is released along these zones of weakness. The stress that causes the earthquakes is generally considered to be derived from present-day rifting at the Mid-Atlantic ridge.”
https://en.wikipedia.org/wiki/Ramapo_Fault
https://dublinsmick.wordpress.com/2013/12/13/12102013-tennessee-georgia-earthquake-3-1m-along-the-eastern-edge-of-the-craton/
http://dublinsmick.wordpress.com/2014/01/24/seneca-guns-500-reported-in-kentucky/

This entry was posted in magma, New Madrid fault zone, science, Tenn and tagged craton plate moving,Dutchsinse, earthquakes Craton Plate, LIQUEFACTION, NORTH AMERICAN CRATON, sand boils, Sinking sand. Bookmark the permalink.http://lasinkhole.wordpress.com/2013/12/12/12102013-tennessee-georgia-earthquake-3-1m-along-the-eastern-edge-of-the-craton/Older Post__________________________
Earthquake Swarm Under Yellowstone Under Way! Obvious Craton Movement In Oklahoma, Texas, Wyoming, Washington
Posted on December 10, 2013 by Dublinsmick
A few weeks ago there were small earthquake swarms in located at theYellowstone Super volcano. Nothing as large as what we are seeing here however. There were also continuing  earthquakes in North Texas as well as the Pacific Northwest.
(Before It’s News)
According to YouTube videographer Dutchsinse, a Yellowstone earthquake swarm is now underway with obvious craton movement in Oklahoma, Texas, Wyoming and Washington. With volcanoes also awakening around the entire world, have we entered into an entirely new phase of Earth changes?
Over the course of the past 48 hours, December 7th, through December 9th 2013 — a series of moderate sized earthquakeshas struck directly along the edge of the North American Craton.
This newest craton edge earthquake swarm consists of upper 3.0M and mid-4.0M earthquakes occurring just South of Yellowstone National Park (supervolcano).  Still well within the newly defined perimeter of the underground magma chamber(s)associated with past eruptions.
This Yellowstone swarm is on top of yesterdays 4.5 magnitude event in Oklahoma, and the ADDITIONAL 3.7 magnitude event in Northeast Texas (both at fracking operation earthquake swarm locations).

Just before 8 a.m., Monday morning, December 9, reports of an explosion at Arkansas Nuclear One were made to Pope County 911 operators. At this time details have not been released in the explosion, but fire officials are reportedly responding to the nuclear facility and a fire is being fought.
A resident in the vicinity of the Arkansas Nuclear One plant reported a “loud, ground shaking explosion and then saw smoke.” It is believed that a transformer on site exploded, but the report remains unconfirmed at this time with Entergy and Arkansas Nuclear One officials. MORE HERE
Major volcanic action on the ring of fire
arctic methane released
http://dublinsmickdotcom.wordpress.com/2013/11/18/information-on-growing-sinkhole-problem-swallowing-southern-missouri-along-the-new-madrid-could-be-cause-of-fema-concern/
Breaking News