THIS TERRIFYING image shows how a catastrophic storm hurtling across the Atlantic will smash into Britain in just HOURS. 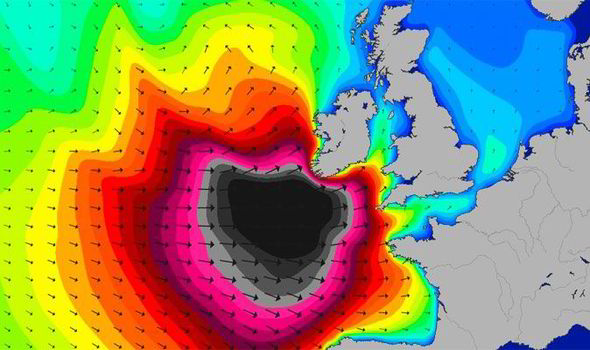 A deluge of torrential rain and hurricane-force winds will smash into Britain [magicseaweed.com]

The UK faces the WORST hurricane-force winds and torrential rain this winter and possibly for DECADES.

And forecasters warned there will be NO let up in the extreme stormy weather until at least the end of the month.

A deep low Atlantic pressure system miles of the UK coast will whip up 150mph winds and violent sea surges as it barrels into the country.

At its centre the intense storm will see pressure drop to just 944mb - seven millibars LOWER than the Great Storm of 1987.

Experts said the worst of the weather is due to set in tonight before a relentless onslaught of wind and rain over the weekend.

They warned communities to prepare for trees to be torn from the ground, roofs ripped from buildings and the flooding crisis to dramatically deteriorate.

Meteorological projections show winds of 12 on the Beaufort scale - Hurricane force - hitting the west coast on tonight and into tomorrow.

Forecasters have warned exceptional low pressure driving the storm threatens to whip up gales which could exceed 100mph - way off the Beaufort scale.

It is also pulling a massive “sea swell” towards the UK which when hurled against the coast will send waves of more than 75-feet crashing inshore.

Another image shows the frenzied “Catherine wheel” of low pressure sweeping towards the UK, closely followed by another at the beginning of next week.

Experts said storms which battered the country over Christmas and saw wind speeds top 142mph in Scotland pale into insignificance next to the approaching monster. 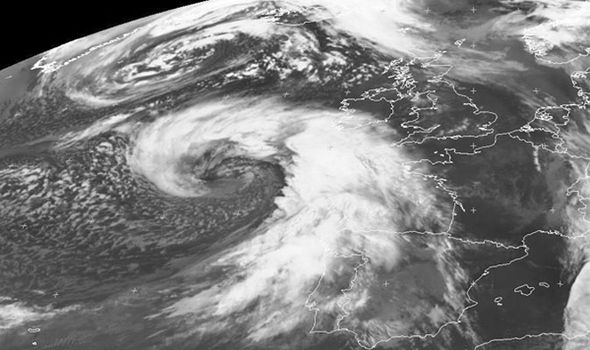 The Met Office has issued a raft of level-2 amber severe weather warnings for wind and rain over the next few days.

Worst hit is expected to be a swathe of the south including Devon, Cornwall and London and the South-east.

The Met Office’s chief meteorologist Andy Page warned heavy winds and more torrential rain will set in tonight with no respite until Sunday at the earliest.

He said: “An Atlantic frontal system will bring a band of rain quickly eastwards during Friday night and early Saturday, with the heaviest rain again likely to be across parts of southern England, followed in turn by heavy showers."

He added: "Winds will also be a feature during Friday night and Saturday with severe gales possible around coasts in the south and southwest of England.

He warned a low pressure system will sweep past the Irish coast on Saturday before crashing into the UK through the day.

“The deep area of low pressure will move east into Ireland during Saturday,” he said.

“Severe gales [are] likely to develop on the southern flank, with parts of southwest England and coastal districts bordering the Bristol Channel and English Channel bearing the brunt of the strongest winds, particularly through Saturday afternoon and evening.

“These winds will also whip up large waves over the eastern Atlantic which will affect southwest facing coasts during Saturday."