Trumpets Herald the Advent of a New Era on Earth?

Trumpets Herald the Advent of a New Era on Earth?

This is one of those mysterious anomalies that tickles my imagination. I don’t pretend to understand it—and that’s what makes it fun.
I’ve posted some video in the past that reveals the truly unnatural ‘bugling’ noises. I find it most amusing.
Linda Moulton-Howe has some current information (right up to yesterday) about the ongoing bizarre noises coming from various parts of the globe that no one seems to be able to fathom.
As I’ve reported in the past, some channels have told us there will be specific “tones”, “notes”, “sounds” associated with our increase in vibration to the higher realms, though we hardly know what SORT of sounds to expect. I must admit I anticipated them being a little sweeter!
I put little to no stock in tales from the Bible, but there is bound to be some smidgen of truth in old stories and prophesies. Whether they play out here remains to be seen.
What a fascinating time to be alive on Starship Earth!

And Linda reveals that these mysterious noises have also come from the site of that highly suspicious fire in Waldo Canyon, Colorado in June of 2012.
I find that incident with the fireballs and the apparently ‘targeted’ incineration of homes that left trees, grass and other vegetation unscathed to be one of the great mysteries of our time.
It was anything but typical. Flying saucers were on the scene. Evil was afoot and the Galactics obviously felt the need to be on hand to control the situation for our protection or they wouldn’t interfere.
They DO love the TV cameras, though. They could have cloaked the ship but why waste a perfectly good opportunity for disclosure?

One particular channeled message via Linda Dillon said  the fire was naturally-occurring—which I feel is absolute bunk—while other intel said it was fires started by off-planet scalar technology to destroy evidence in those specific homes that would incriminate the cabal members in their nefarious deeds. That resonates more.
I don’t KNOW what the truth is, but I feel in my gut that there was nothing natural about it. I’m eager to know the truth about that incident, and these confounded noises!  ~ BP 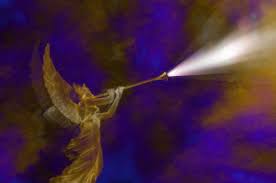 From Linda’s EarthFiles web site…
February 4, 2014
Feedback About Mysterious Booms
and Horn/Trumpet Sounds
Click for report.
— “And the sixth angel sounded (which had the trumpet), and I heard
a voice from the four horns of the golden altar …”
- King James Bible, Revelation, Chapter 9
— “The boom (and horn sound like Switzerland video) actually came from the
direction of the now famous June 23, 2012, Waldo Canyon fire on the very same
day the fire started. … the CBS 4 helicopter footage showed house after house
on fire with NO fire to the trees surrounding those burning homes.”
- Resident of Littleton, Colorado

The June 2012 Waldo Canyon Fire’s odd destruction of
houses amid green unburned trees and other untouched
houses northwest of Colorado Springs, Colorado.
Aerial © 2012 by Getty Images.
It’s not like a raging wildfire swept through the neighbourhood. Only the homes were eliminated, and the rubble isn’t black, it’s white, or grey… kind of like the ash left at the Twin Towers after 9/11… hmmmmmm.
And that’s not all the mainstream media showed the public.  The saucer is obvious by omission in their news commentary. The videographer followed the saucer until the helicopter was out of view then abruptly went back to the helicopter.
If they don’t mention it, you know it’s for real. Otherwise they would say, “and you can see the ‘water balloon’ behind the helicopter—no wait, above the helicopter, oh now it’s in front of it—there to help in the firefighting effort”, but no—not a word. Hysterically funny to me. Like we wouldn’t notice, LOL.  ~ BP

February 15, 2014 – Strange Metallic Horns and Boom Reports Persist
Click for report.
“I heard the more metallic sounds that were described by one of the
women in your Earthfiles interview. It did sound like a
road grader with the blade down on asphalt or metal.”
- Resident of Brookings, South Dakota, January 2014
“The shofar (ram’s horn) is mentioned frequently in the Hebrew Bible,
the Talmud and rabbinic literature. The loud horn sound of a shofar emanating
from the thick cloud on Mount Sinai made the Israelites tremble in awe.”
- Wikipedia about Exodus 19:16-19

Archangel Michael depicted on the Ponte Sant’Angelo bridge in
Rome, Italy, who is described in the Quran as “blowing on his trumpet,
calling the angels when this Age is about to pass away.”
Image © by Jennifer Lyn King.
See also: [url=http://quransmessage.com/articles/the trumpet is blown or is it FM3.htm]The Trumpet Is Blown Or Is It? [/url]

» AUDIO: Tony Gosling - Advent of the Global Corpocracy
» 7 Signs That Herald The Dark Night Of The Soul
» 7 Omens That Herald Dark Night of the Soul
» More Mysterious Trumpets Sounds ...
» The trumpets - ابواق السماء