Another NY Financial Trader Jumps—in Front of a Commuter Train

Another NY Financial Trader Jumps—in Front of a Commuter Train 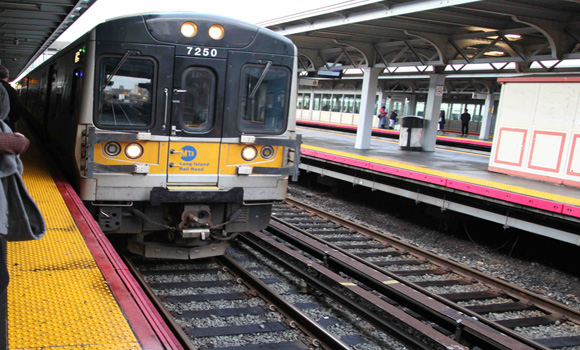 by Michael Gray
A Manhattan trader was killed Tuesday morning by a speeding Long Island Rail Road commuter train, marking at least the seventh suicide of a financial professional this year.
Edmund (Eddie) Reilly, 47, a trader at Midtown’s Vertical Group, jumped in front of an LIRR train at 6 a.m. near the Syosset train station.
He was declared dead at the scene.
Reilly’s identity was confirmed by Salvatore Arena, an LIRR spokesperson, who said an investigation into the incident was continuing.
Passengers on the west-bound express train told MTA investigators they saw a man standing by the tracks before he jumped in front of the train, Arena said.
“Eddie was a great guy,” Rob Schaffer, a managing director at Vertical, told The Post in an email. “We are very upset and he will be deeply missed.”
The divorced father of three had rented a house around the corner from his ex-wife, Michelle Reilly, in East Norwich, NY.
One family friend, who said he spoke to the trader on Sunday, told The Post that Reilly “didn’t look good.”
Separately:
■  Autumn Radtke, the CEO of First Meta, a cyber-currency exchange firm, was found dead on Feb. 28 outside her Singapore apartment. The 28-year-old American, who worked for Apple and other Silicon Valley tech firms prior to founding First Meta, jumped from a 25-story building, authorities said.
■  On Feb. 18, a 33-year-old JPMorgan finance pro leaped to his death from the roof of the company’s 30-story Hong Kong office tower, authorities said. Li Junjie’s suicide marked the third mysterious death of a JPMorgan banker. So far, there is no known link between any of the deaths.
■  Gabriel Magee, 39, a vice president with JPMorgan’s corporate and investment bank technology arm in the UK, jumped to his death from the roof of the bank’s 33-story Canary Wharf tower in London on Jan. 28.
■  On Feb. 3, Ryan Henry Crane, 37, a JPM executive director who worked in New York, was found dead inside his Stamford, Conn., home. A cause of death in Crane’s case has yet to be determined as authorities await a toxicology report, a spokesperson for the Stamford Police Department said.
■  On Jan. 31, Mike Dueker, chief economist at Russell Investments and a former Federal Reserve bank economist, was found dead at the side of a road that leads to the Tacoma Narrows Bridge in Washington state, according to the Pierce County Sheriff’s Department. He was 50.
■ On Jan. 26, William Broeksmit, 58, a former senior risk manager at Deutsche Bank, was found hanged in a house in South Kensington, according to London police.
Source