Latest topics
» They Want Your Soul - The Richard Dolan Show

The Spirit World Chronicles: Every Transition is Unique

Written by Wes Annac, the Aquarius Paradigm
The Spirit World Chronicles is an ongoing series based on channeled accounts of what the afterlife is like. Some of the material examined in this series dates back to nearly a century ago, and the referenced sources discuss a wide range of topics that have to do with life after death and the conditions of the realms beyond.
Previously, we examined the relevance of the silver cord’s severance to the death of the body, and now, we’re going to continue our discussion with material about the benevolent nature of death and the uniqueness of each person’s transition.
The departed souls who speak here are more alive than ever and loaded with information about the uniqueness of each transition and the extent to which death liberates us from mortal pain, and we’re going to jump into their material with a quote from Julia Ames about the usual manner in which the transition takes place.
“There are many ways of passing from your side to ours. Of these the most general is painless waking up and the first sensation is one of rest, of relief, and of peace.” (1)
Any pain that was experienced before death is gracefully lifted, and even though we’ve associated death with pain, it’s actually a great relief for most people.
I’m sure a lot of people who were in pain appreciate when they cross over and their pain leaves them, and with a new lease on life, they’re able to soar, freely and painlessly, and do all of the things they weren’t able to do in physical life. Their existence takes on a whole new flavor, and it starts with the death of their plagued physical body.
We’re then told the transition of leaving a body that’s in pain can unfortunately be painful for those who don’t instantly cross over.
“Unfortunately the moment of transition sometimes seems to be very full of pain and dread. With some [the time of quitting the body] lasts a comparatively long time. … With some it is momentary. The envelope opens, the letter is released, and it is over. But sometimes the deathbirth is like childbirth and the soul labours long to be free.” (2)
Leaving the body can sometimes be a long and arduous process, and I’m sure the people who resist death take the longest amount of time to be freed. Again, understanding the situation will make the entire process much easier and more graceful.
Ames continues: “I do not know why some should pass so much more easily than others. That it is a fact is true. But, after all, the parting of soul and body is but an affair of moments. There is no reason to regard it with so much alarm.”  (3)
Even if it takes a while for some people to be released from the body, we have no reason to fear death or regard it as anything that can’t be enthusiastically embraced when the time comes. Instead of fearing it, we can learn about the realms beyond in preparation for our eventual entrance into them.
As we’re told below, the ‘preliminaries’ of death are the only potentially painful aspects, and the aware seeker can greet the transition easily.
“The tranquil soul that prepares and knows need not feel even a tremor of alarm. The preliminaries of decease are often painful; the actual severance, although sometimes accompanied by a sense of wrench, is of small account.” (4)
The ‘sense of wrench’ being referred to could very well be the silver cord’s detachment from the physical body, and that aspect of the process can be met gracefully by people who understand that they aren’t actually ‘dying’ but moving into a newer and much freer life.
Most people either fear or avoid death, but understanding that it liberates us from physicality and introduces us to a higher state of consciousness will drastically decrease any pain or difficulty we might’ve otherwise experienced.
Mike Swain tells us that the most ideal way to pass on is to do it with assurance of where we’re going and why we’re going there.
“There are three ways of moving into our world from yours. The first is to come as I did, with the violence of an abrupt end. The second is to come as a result of the body breaking down; for example, from illness or old age. The third way, the logical way, is to come to us with full and conscious understanding of why it is happening.” (5)
Understanding the circumstances surrounding one’s death makes the overall process much easier, whereas transitioning violently or abruptly with little spiritual knowledge could make it difficult.
Like I’ve said before, the seekers who understand that consciousness is eternal can make it much easier for our guides and family members if we cross over before we evolve, because we’ll decrease the amount of work they have to do to make us aware.
Continued in Part 2 tomorrow.
Footnotes:
(1) Julia [Julia T. Ames] through W.T. Stead, medium, After Death. A Personal Narrative. New York: George H. Doran, n.d.; c. 1914, 159.
Ames’ family name does not appear in the book, but can be found at “William Thomas Stead,” Red Pill, http://redpill.dailygrail.com/wiki/William_Stead.
(2) Ibid., 66.
(3) Loc. cit.
(4) Loc. cit.
(5) Jasper Swain, From My World to Yours: A Young Man’s Account of the Afterlife. New York: Walker, 1977, 48. 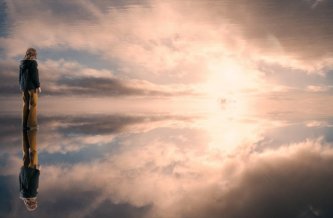