OUT OF MIND » THE INSANITY OF REALITY » GOVERNMENT & THE NEW WORLD ORDER » For the First Time in History, Israel Suspiciously Closes All Embassies and Consulates World-Wide! (Breaking VIDEOS)

For the First Time in History, Israel Suspiciously Closes All Embassies and Consulates World-Wide! (Breaking VIDEOS)

For the First Time in History, Israel Suspiciously Closes All Embassies and Consulates World-Wide! (Breaking VIDEOS) on Mon Mar 24, 2014 2:34 pm 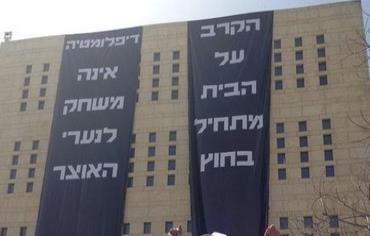 For the First Time in History, Israel Suspiciously Closes All Embassies & Consulates World Wide!
This is VERY strange.  Is something about to happen—an attack of some sort?  As the headline reads, this is the first time in history Israel has ever closed all embassies and consulates world-wide! Let’s definitely keep our eyes open on this one and see what happens!
Quote From Jim Stone Freelance :
Israel is a delegate nation at NSS. I guess now this means they’ve pulled out at the last minute. (Remember the lucky folks who didn’t go to work morning of 9/11 because they were tipped off?) Pulling out of all embassies world wide makes total sense too and possibly another clue to this being a false flag event in the making with the pretext of attacking Iran. Once they attack Iran they wouldn’t want their people anywhere in the world being targeted by angry Iranians and other sympathizers seeking revenge.
Vanishing Israelis and Jews from important places that are about to go BOOM has indeed happened before, on 911, and on 311 when all Magna BSP employees working Fukushima returned to Israel just before the tsunami and nuclear disaster. This is spooky, DAMN SPOOKY considering the disappearance of flight 370. Something big is coming, COUNT ON IT, and DON’T FALL FOR THE OFFICIAL LIE WHEN IT HAPPENS.
And I agree.  Is this the beginning of another false flag event?  Only time will tell!
For when they shall say, Peace and safety; then sudden destruction cometh upon them, as travail upon a woman with child; and they shall not escape. 1 Thessalonians 5:3

Could it be the flight they shadowed? And possibly the reason why it went up to 45K feet to get behind the radar signature in a certain area?
CLICK HERE FOR REUTERS NEWS ARTICLE
Thanks to: http://beforeitsnews.com

OUT OF MIND » THE INSANITY OF REALITY » GOVERNMENT & THE NEW WORLD ORDER » For the First Time in History, Israel Suspiciously Closes All Embassies and Consulates World-Wide! (Breaking VIDEOS)