MessageToEagle.com - Earth is an amazing planet and our nature is full of wonders. We have previously written about incredible singing plants.

This time we would like to focus our readers' attention on another amazing geological phenomenon, namely the so-called growing stones.

It is difficult to imagine that stones can really grow, but these stones seem to be alive! 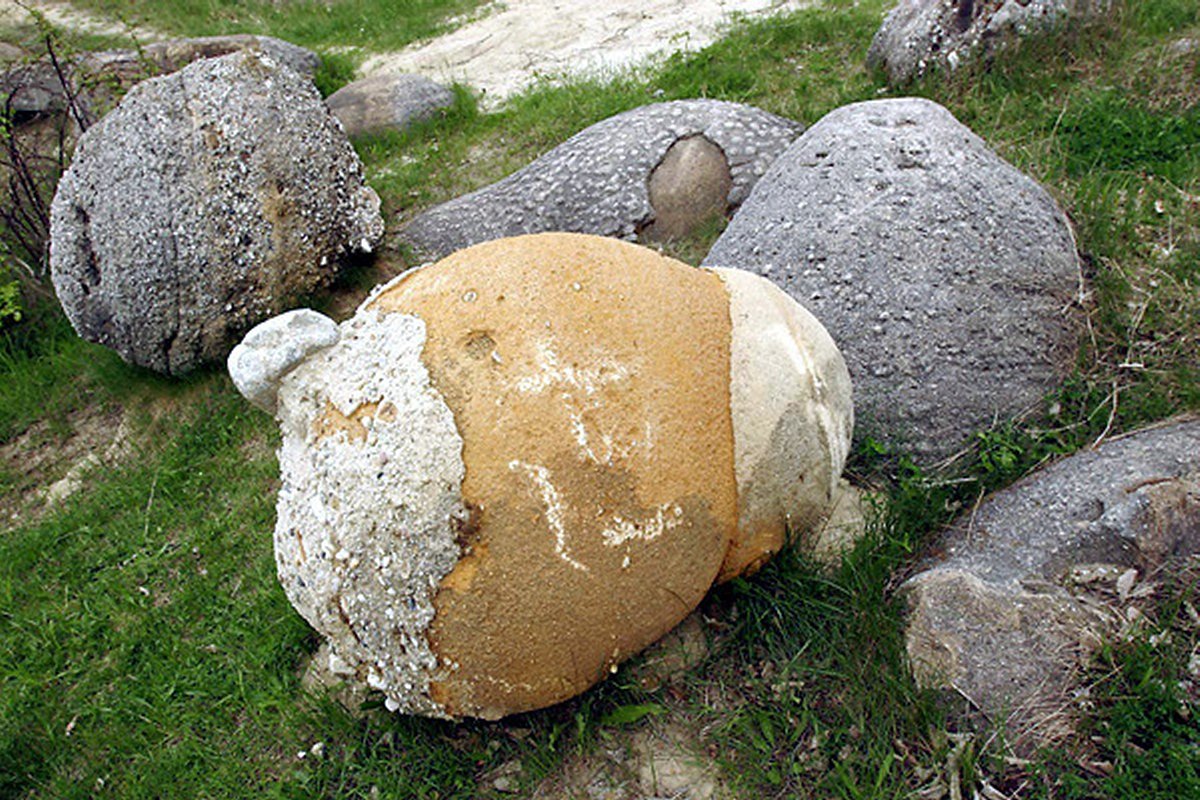 Here in a small village named Costesti, there are some fascinating and mysterious stones, called trovants, which are believed to have a life in them. 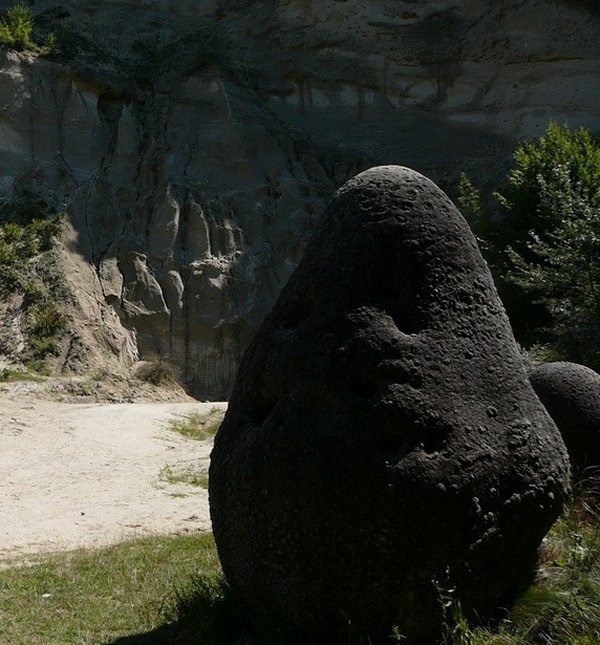 The earthquakes definitely contributed to the creation of the first trovants. It is assumed that trovants consist of a stone core, with an outer shell of sand.

What makes these formations unique and mysterious is that they are reproducing after coming in contact with water.

After heavy raining the stones grow starting with 6-8 millimeters and ending with 6-10 meters. 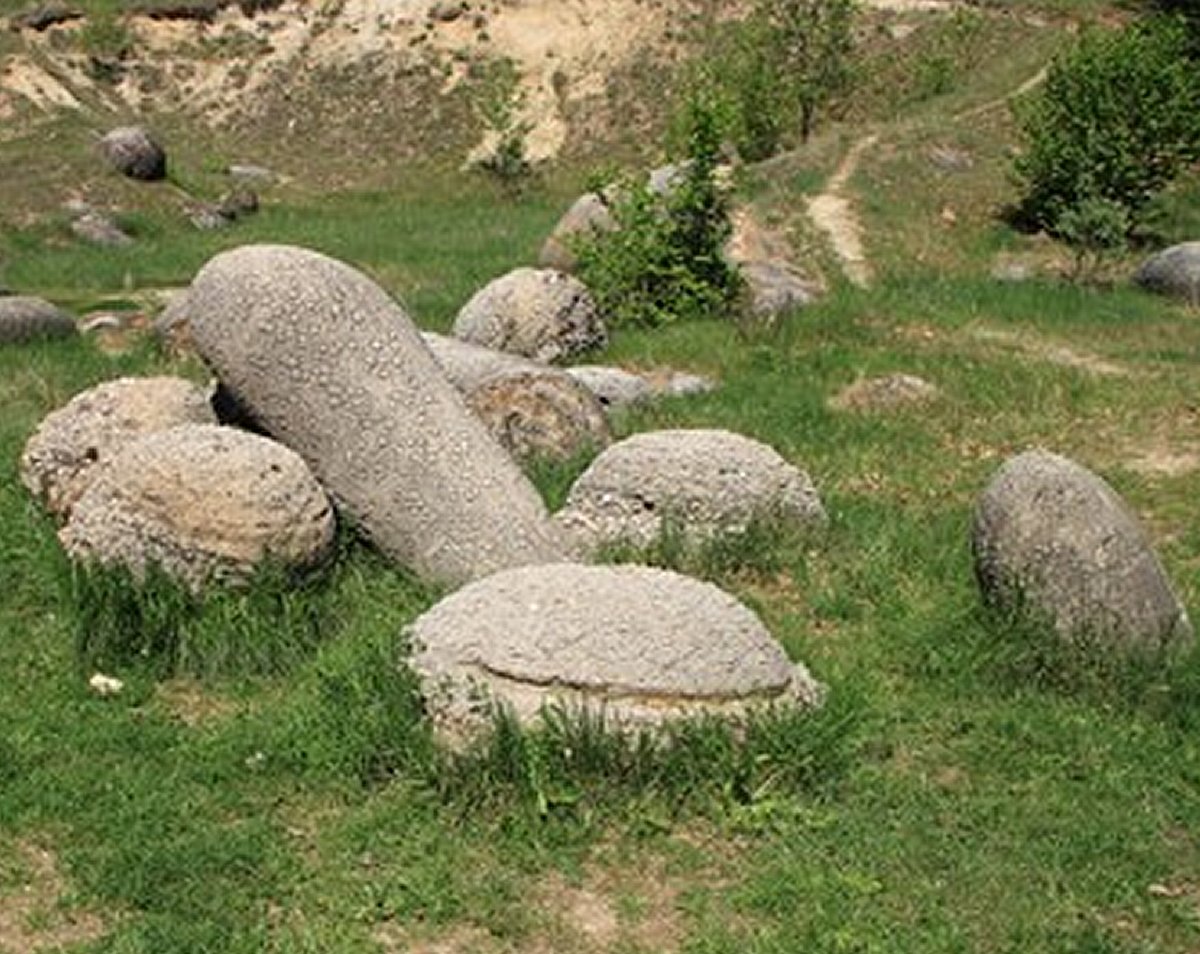 The trovants from Costesti Museum are unique in the world because of one particularity – small trovants are growing on the surface of other bigger trovants. And they are the biggest trovants in the world.

One of the strangest aspects of these stones is that although they vary in size, from a couple of millimeters to even 10 meters and they are very similar, taking into account a natural law that states there are no such things as identical stones. 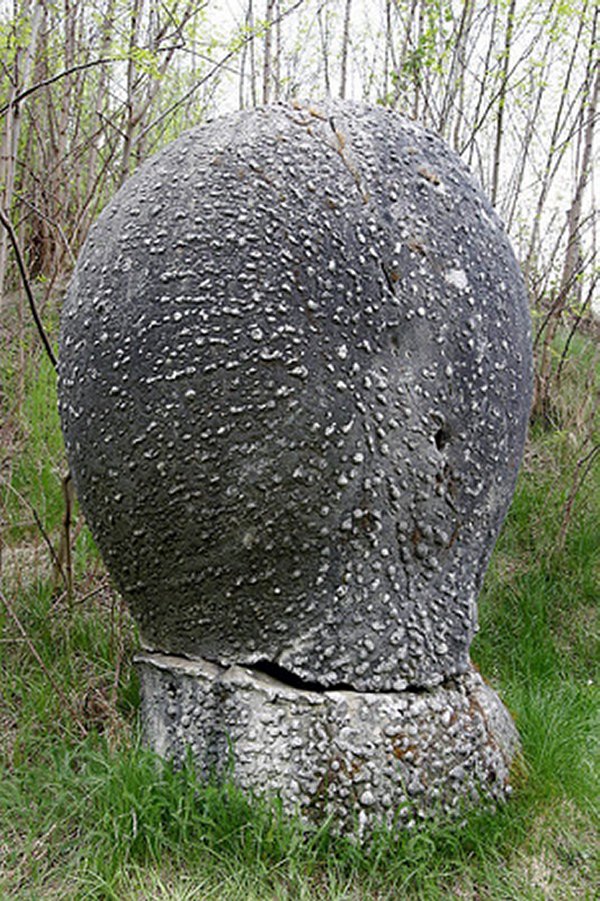 A trovant having a strange shape.

In addition, just like the famous rocks in Death Valley, California, the trovants often move from one place to another place.

Complex aggregates of two ore more trovants can often be found. There is no mineralogical difference between these strange pseudoconcretions and the surrounding sands.
Their cement is often carbonate-type and no distinct nucleus can be found inside them.

Many hypotheses have been produced on their origin. However, scientists believe that the stones increase in size due to high content of various mineral salts, which are under their shell.

When the surface becomes wet, these chemicals start spreading and put pressure on the sand, making the stone "grow". 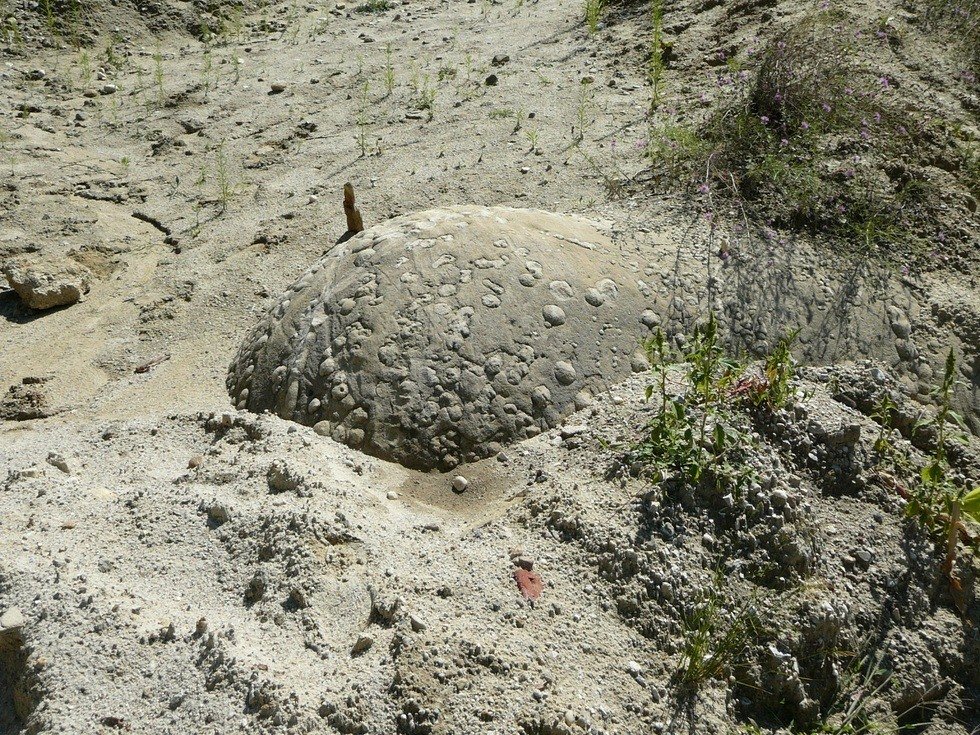 Click on image to enlarge
A living stone - Romania

Trovants were formed in the process that involved: gravitation force, seismic shocks, solution cohesion forces (particularly surface tension) and the adhesion strength between the sand grains and the liquid.

The great trovants found in the thick sand beds reflect great initial amounts of solutions in the bulk of the sandy sediment. The perfect spherical shapes which sometimes can be found suggest great magnitudes and durations of the paleoearthquakes.

A hypothesis on the seismic origin of the trovants is very well sustained by many laboratory experiments of which the most relevant are those, in which sand spheres are obtained out of wet sand on fine sieves under mechanical shocks.

On Earth trovants of different ages have been recorded in in Russia, Siberian Platform, and Wyoming.

There are also in the Carpathians area (a mountain range in central Europe that extends from Slovakia and southern Poland southeastward through western Ukraine to northeastern Romania).

In Romania there are particularly numerous the lower Sarmatian trovants which are very diversely shaped. 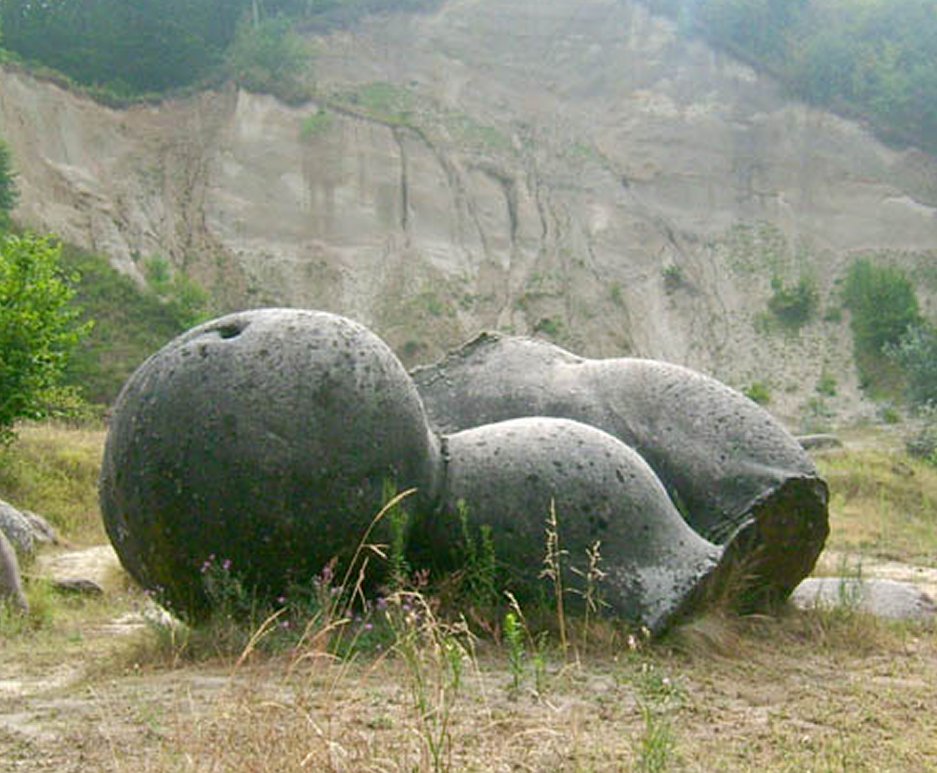 Click on image to enlarge
Today, the Trovants Museum in Romania is protected by UNESCO. 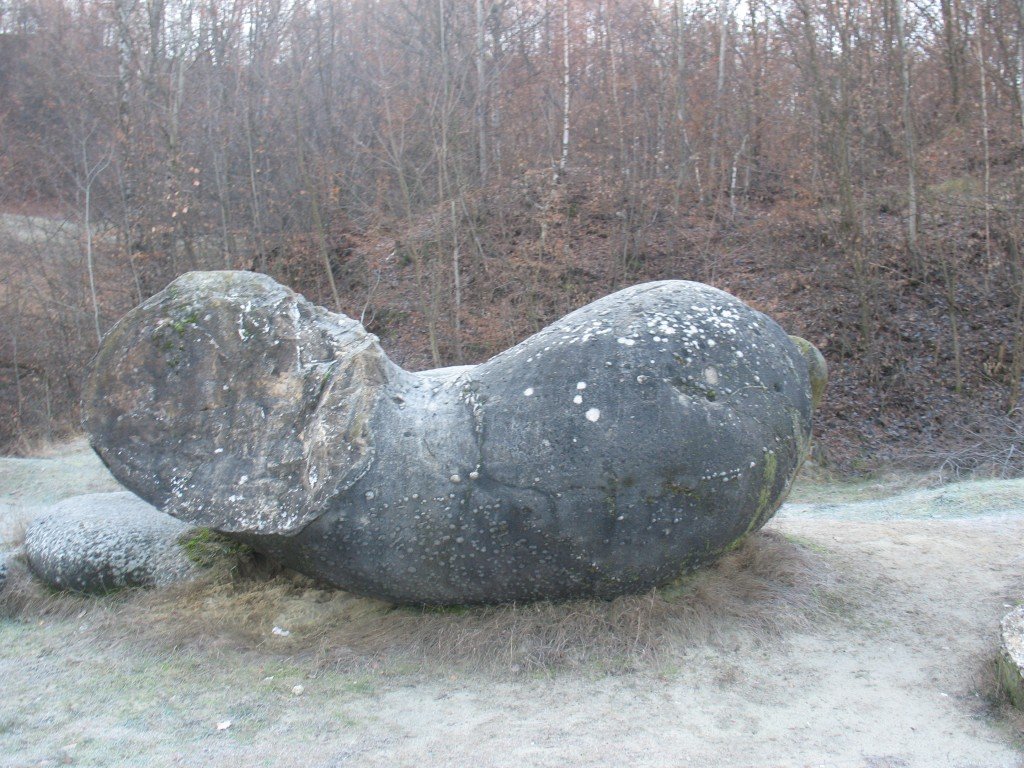 However, despite their best efforts, scientists have failed to come up with a logical explanation why the stones have extensions that remind of roots. If they are cut, their sections have colored rings, just like trees.

The two essential conditions for the trovants formation are:

- existence of sand sediments and conservation of a vast porosity, despite the normal compression caused by the pressure
- presence of local concentrations - “segregation” of specific minerals from secondary components dispersed in the host rock. 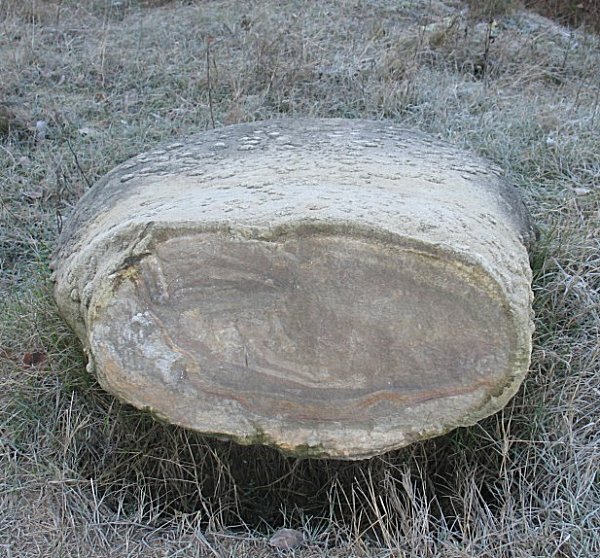 Some trovants have terminations looking like roots. If these roots are cut the section looks like one of a tree with coloured rings.

These stones behave almost like some kind of unknown inorganic life-form!
We cannot deny that our planet is truly amazing.

Local residents have been aware of the stones unusual properties for more than 100 years, but they have never paid the trovants any special attention.
The stones were often used as building materials and tombstones.

Today, the Trovants Museum in Romania is protected by UNESCO.