Scintillating Sirius is sometimes mistaken for a UFO
For all the hours of dark sky time amateur astronomers accumulate, few of us have seen a UFO. It makes sense. We’re generally familiar with the stars and their movements, where the planets happen to be and the atmosphere’s uncanny ability to distort and parse light into strange and beautiful phenomena. Not that some skywatchers haven’t seen a few things that defy immediate explanation.
While some might say this takes away the magic of the night sky, rendering us blind to the possibility of UFOs, I’d argue the contrary. Knowledge deepens our appreciation of all we see, hear, smell and touch. 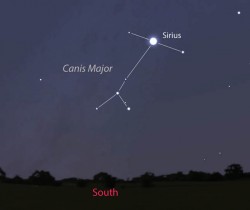 Sirius, nicknamed the Dog Star, is the brightest star in Canis Major and brightest in the night sky. This map show Sirius about 1/3 of the way up in the southern sky during late twilight this month. Stellarium
Familiar objects often mistaken for UFOs include bright stars, planets and satellites, but high – if not highest – on the list is Sirius in the constellation Canis Major the Greater Dog.
Sirius has attained UFO status for several good reasons: at magnitude -1.5 it’s the brightest star in the sky, it “moves” both slowly and rapidly and shoots out light of different colors.
Because it’s bright, and for many of us, falls along an easy line of sight on March evenings, we’re bound to notice it. No star sparkles more intensely especially when hovering low in the sky. 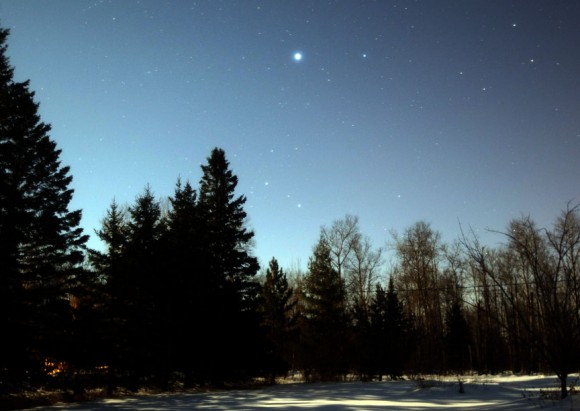 For skywatchers at mid-northern latitudes, Sirius is the bright, often flashing star in the southern sky at nightfall. Credit: Bob King
Stars. So big but yet so tiny. Despite their enormous size, distance reduces stars to tiny pinpoints even in the largest telescopes. When a star beam hits our atmosphere, it gets yanked around by parcels of air of varying density, speed and size. Each parcel acts like a individual lens, refracting or bending the star’s light into a tiny image. As the air churns overhead, the positions of all those individual images continually change, zigging the star in random directions. While our eyes aren’t keen enough to distinguish the many tiny images moving to and fro, we sense the starlight’s tortured path as sputtering light or twinkling. All stars flitter around – just ask telescopic observers –  but twinkling is most noticeable in bright stars like Vega, Canopus, Rigel and especially Sirius. 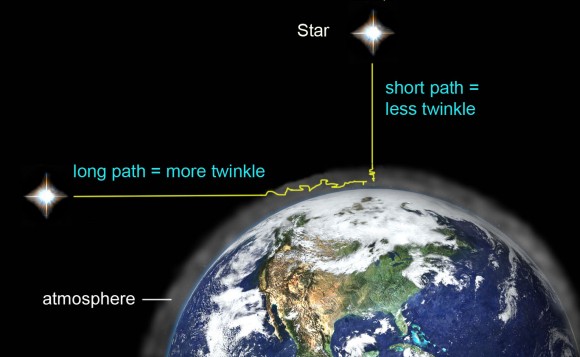 Twinkling is caused by moving air pockets in our atmosphere. Twinkling is much stronger and more noticeable near the horizon, because our line of sight passes through a much greater thickness of air. Illustration: Bob King
Mind you, it doesn’t necessarily matter how calm it is on the ground. Some 10 miles of relatively thick air between you and Sirius provide plenty of opportunities for fluttering images on many otherwise tranquil nights. Bright planets generally don’t twinkle because they’re close enough to show actual disks.  Tiny shifts induced by atmospheric turbulence can bodily move a star with ease, but planets are big enough compared to the size of the air cells to hold their own and beam forth a steady light.
For some, Sirius’ twinkling creates the sense that a star is moving or shooting about, making it that much more mysterious. Superimposed on this apparent rapid movement is the slow westward drift of the stars caused by Earth’s rotation. People have contacted me about brilliant, slow-moving objects, and it’s clear they’ve been watching a star get a free ride from our revolving planet. 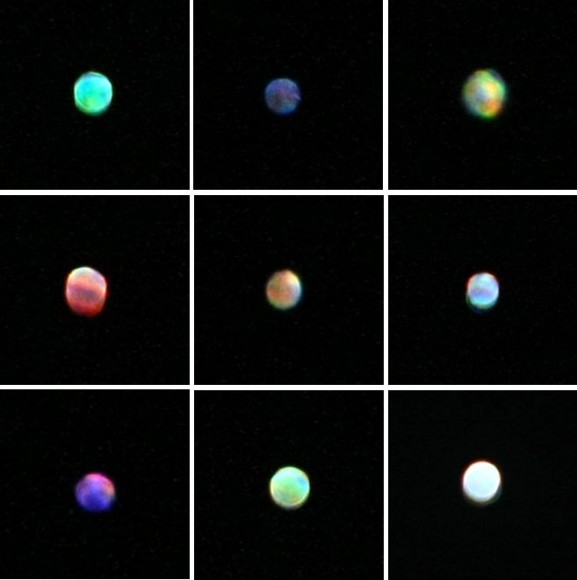 The color and brightness of Sirius changes rapidly as it twinkles. I shot these individual 1/30″ photos slightly out of focus to spread the color out and show it more clearly. Not only are the hues striking but brightness changes are obvious, too. The short video at the top of this story captures Sirius’ twinkling “live”.Credit: Bob King
So we’ve got brightness and movement going for us – what about color? Colors come from the air, too. Just as white light is composed of a rainbow or spectrum of individual colors from indigo to red, so is starlight. When Sirius is low above the horizon, refraction (bending of light) is strong enough to create images of the star in every color of the rainbow and cast them about in different directions. Split-second variations in air density and flow make for continuous multi-color sparkles.
Sirius’ colors are fairly obvious with the naked eye, but I’ve found binoculars show them even better. By the way, the jerkiness induced in holding binoculars steady adds another motion factor to the UFO equation. 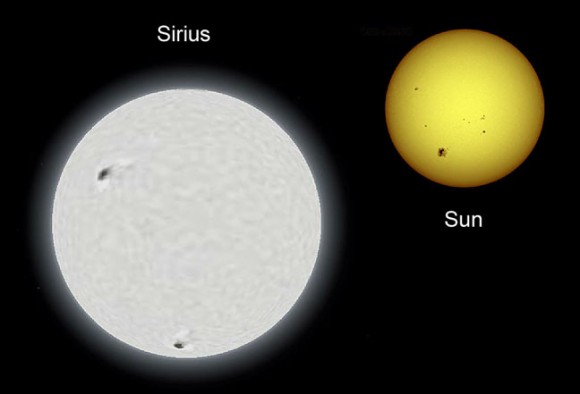 Sirius is hotter, brighter and 1.75 times the size of our own sun. As stars go, it’s practically in our backyard at just 8.7 light years away – the main reason it appears so bright in the nighttime sky. Credit: Wikipedia
Once, a fellow came to our local planetarium with video he’d taken of a UFO, hoping for help in identifying the object. We watched it change from a star to a bloated disk and back to a star again as the image jumped wildly about in the shaky, hand-held camera. Knowing the date and time of the footage, we instantly knew it was the camera struggling to maintain autofocus on Sirius. 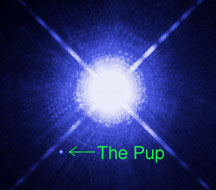 Sirius is orbited by an Earth-sized, superdense white dwarf nicknamed the “Pup”. Credit: NASA/ESA
I remember thinking, “wow, we really helped this guy out”, but he was less than pleased. We tried to explain that he was seeing not only the brightest star in the sky but one twice as massive as the sun and nearly twice its size. But facts were of no use. Convinced he had recorded a UFO anyway, he took his video and promptly left!
I’d love to see a real space ship UFO powered by alien biology. Deep down many of us suspect they exist. With 1,779 extra-solar planets confirmed to date, habitats for potential life seem more certain than ever. But what are the odds of little green men dropping by anything soon? Not only are the distances between stars daunting, but intelligent species may have no interest in outer space or leaving the home planet. After all, whales don’t build space ships.
RELATED POST: Unknown Multicolored Glowing Light