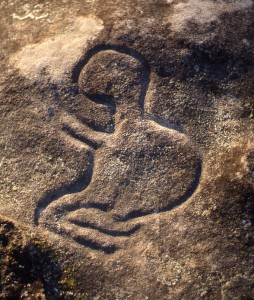 28th March 2014
By Steven Strong
Contributing Writer for Wake Up World
This brief article is the most accidental and one of the most important I have yet penned.
Evan and I recently received some archival records of immense importance, relating to studies, sites and conclusions that Frederic Slater (President of the Australian Archaeological Society of Australia), along with a bevy of well connected associates, shared openly in the public arena in 1937. According to the archives, this group of scholars were adamant that some (then) recently discovered rock engravings were of Egyptian inspiration, and made reference to a rock platform near the Cave of the Golden Boomerang we ourselves had previously stood upon – and came to the same conclusion.
Evan searched online for further details of that particular site, and there amongst a Newcastle University discussion about this location and its archaeology, was a photograph. The figure it depicted was a rather unusual semi-embryonic foetus, and much to our surprise – and delight – it was claimed that this icon represented the Pleiades.
The Pleiades Embryo
Our reaction was instant. We both immediately recognised the symbol, where it was found, and how dramatically the traveller’s narrative of the Cave of the Golden Boomerang had been extended — into the heavens and beyond. Knowing how sacred this cave was, detailing the beginning of modern humans, we had previously known of the general details, but none of the specifics. This changed everything.

Initially taken by the precision of the artist and the impressive array of huge human figures, we saw the small figure to the right of the ‘standing woman’ and took it to be, with some hesitation, a new borne child. But that explanation sat uneasily, because every other human figure here is representational and proportional to the true human figure. By comparison, the ‘baby’ appears so odd and distorted and only vaguely resembles an infant. It is neither being held nor cared for by the closest female, rather it is seated beside the woman’s shin but is not touching nor dependent on her. There is also no crib or traditional coolaman dish depicted.
Deliberately apart from the others, this embryonic figure is the first engraving in the gallery. The most prominent and tallest figure is the female, and until we were made aware of the constellation marker, we had assumed the narrative began with her. But the three human-like figures and the sacred Golden Boomerang come after, not before, the constellation marker. The narrative of creation doesn’t begin with her, it begins at the Pleiades.
We were already aware that this gallery itemizes the agents involved in the creation of modern humans, but we never had such a firm archaeological foundation upon which to base our belief in an off-world involvement, until now. Knowing that it represents the Pleiades, that tiny icon adds so much to this ancient Original record of humanity’s genesis; it provides an introduction, a place of setting and a genetic backdrop. As far as we are concerned, this is the most convincing evidence of an ancient Pleiadian ancestry on this continent we have seen. 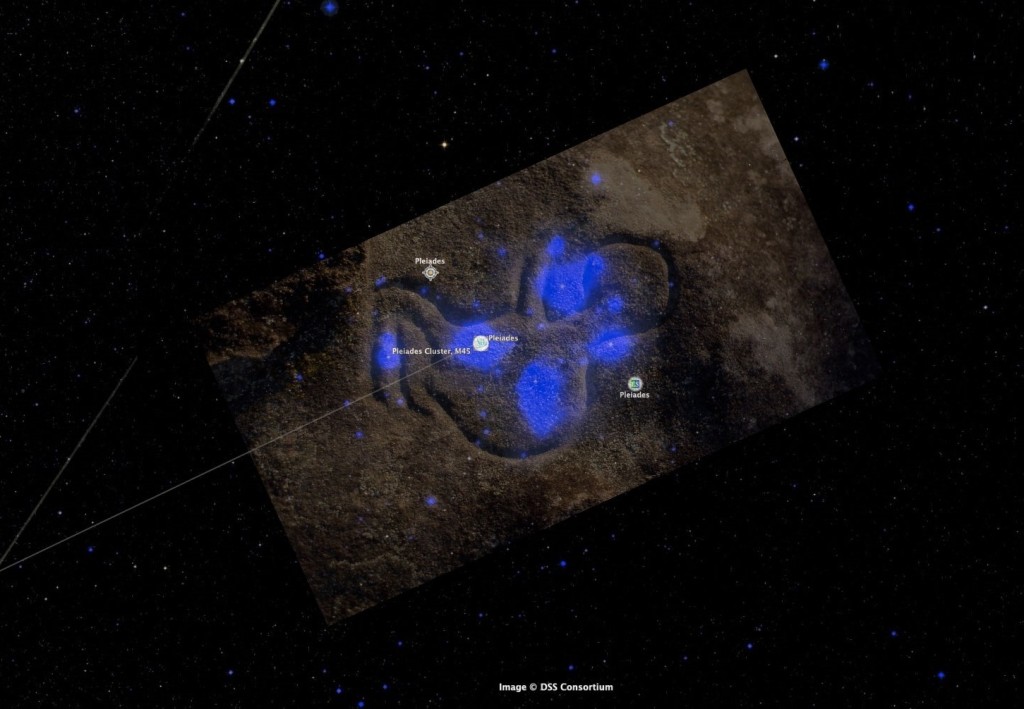 A Light That Shines Far Off
The only question unsolved relates to whether the woman depicted was from the Pleiades. The placement of the Pleiades signature beside her left shin, with her right hand extended and touching another woman who could be seen as floating in space (perhaps in transit to Earth) certainly adds weight to that interpretation.
The second floating woman reaches forward and touches a male who is standing on solid ground near the sacred boomerang. We were never told whether or not that male actually touched, or was reaching towards the holy object – that part of the narrative we could not determine even when standing on site. 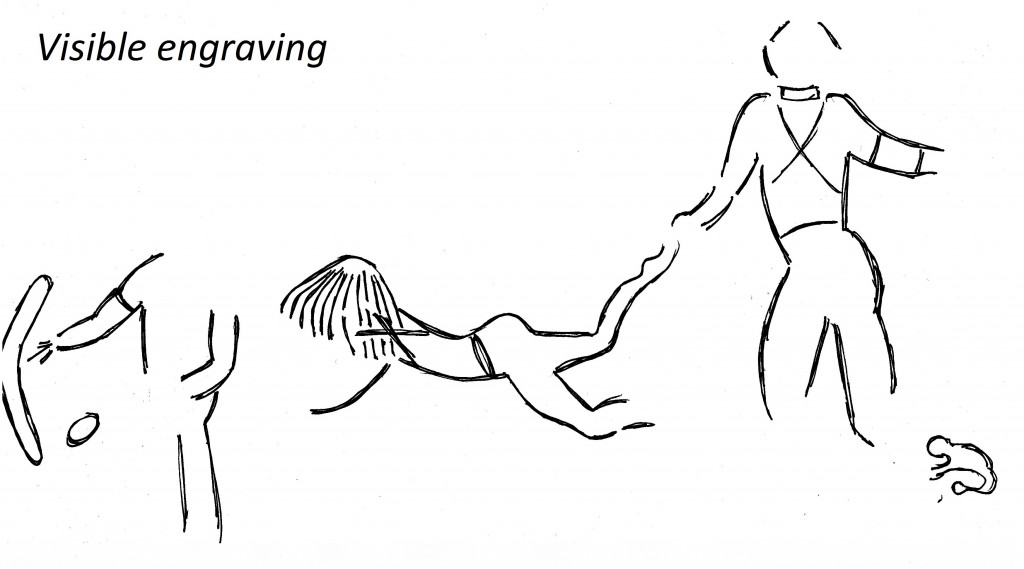 But for now there is at least one certainty: at the very beginning of humanity’s creation, beings from the Pleiades stood beside the very first humans. At least 5,000 years ago, this magnificent piece of representational art was created in a way that could never be claimed to be cryptic or symbolic; this was not abstract art, and there were meant to be no questions. It is a narrative of creation, and it began in the Pleiades. That is what was engraved. From that starting point, the details are still open for consideration.
This fortuitous discovery is the final nail in the coffin of any who deny a Pleiadian presence in ancient times in Australia. Granted, we had already seen 8 UFO-like engravings at Bambara and a 2 x 4 metre pecked “Star Fish” nearby…. we have in our possession the metal and crystal objects found in the area…. we know Frederic Slater’s translation of the First Language emphasises that the Creation Beings “came to Earth” from “a light that shines far off”…. and above and beyond these truths is the Original truth: the Original Dreaming story “The Seven Sisters” is the only ancient narrative that is universally known to all Original tribes, transcending all tribal, language and geographic boundaries. But nothing silences naysayers like solid archaeology. And this is solid archaeology.
The ancient Original custodians have engraved lines in the rock that start with the distant Pleiades constellation, and culminates in the beginning of humanity. The reason this was done is simple; our story here began a long way out there. That was their eternal truth and remains our collective ancestry.
For more information, check out my previous article “Does The Cave of The Golden Boomerang Contain Profound and Ancient Pre-Historic Rock Engravings?“
Previous articles by Steven Strong:

Steven Strong is an Australian-based researcher, author and former high-school teacher with a background in archaeology. He was involved in the formation of a Graduate Diploma of Aboriginal Education for the NSW Department of Education, writing units on Traditional Law and Contemporary History. He also co-authored the highly successful “Aboriginal Australia: A Language and Cultural kit”.
Together with his son Evan, Steve has co-written 4 books: Constructing a New World Map, Mary Magdalene’s Dreaming and Forgotten Origin (published by University Press of America) and their latest publication Shunned, which thoroughly refutes the Out-of-Africa theory of human history and examines the archaeological and DNA evidence that suggests Australia is where modern human beings derived.
Steve has written over a dozen articles on Original history and lore for the National Indigenous Times, with four articles also appearing in New Dawn magazine. With close to 30 years of contact with original Gumilaroi people and tribes of the Bundjalung Language Confederation, and the benefit of extensive consultation with many Original Elders, Steve and Evan’s work is to reveal the story of the Original people, a narrative that was almost lost to aggressive European colonisation.
For more information visit ForgottenOrigin.com or get involved with the Forgotten Origins tribe!
Thanks to: http://wakeup-world.com