OK, this is pretty creepy. Normally, Diego Garcia calling for an empty container ship
to move ammo, or whatever, wouldn’t be too alarming. 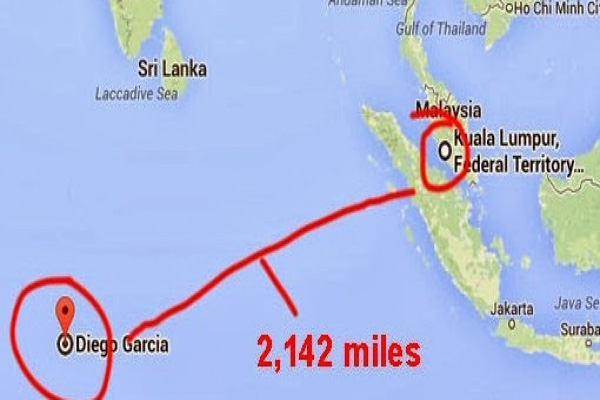 But notice the classification of the request. 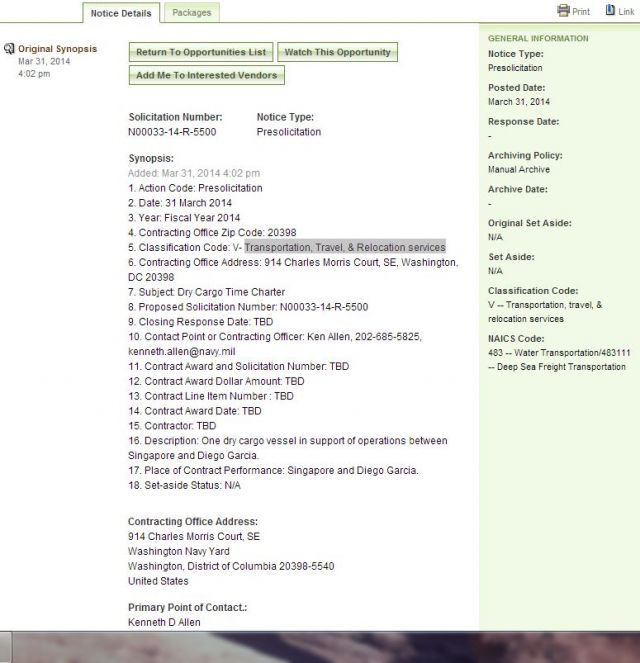 https://www.fbo.gov/?s=opportunity&mode=form&id=dd56e1acbc89cc09afe216687a1406a5&tab=core&_cview=0
I did some time in the Navy. The wording of the classification makes it sound like they will be transporting
people. Hmm.
Interesting to note, the Ocean Shield, a cargo ship, left port the 31st, the date of the request.
Ocean Shield tracking goes dark.
Edit to add: The TBD (To Be Determined) status on most of the details suggests this contract was done in haste.
__________
Strange Coincidence? – Malaysian Airlines Plane Replica Stored at Ben Gurion Airport
By now you’ve probably heard about the “duplicate” Malaysia Airlines Boeing 777-2H6ER. Based on the data at Planespotters.net it appears that there is a Malaysia Airlines Boeing 777-2H6ER being stored at Tel Aviv airport.
The missing plane had a tail number of 9M-MRO. The one at Tel Aviv has tail number 9M-MRI. 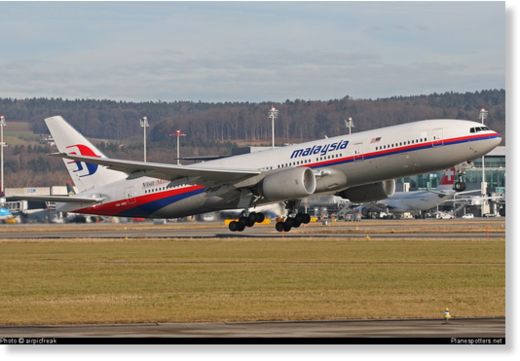 “duplicate” Malaysia airlines plane now at Tel Aviv
Christopher Bollyn appears to have been the first to write about this latest “conspiracy”, suggesting that the plane at Tel Aviv is a “duplicate” that may be used at some point in the future to carry out a “terrorist attack” masquerading as the missing Malaysia airlines plane. But this is pure speculation.
At the beginning of 2013, Malaysia airlines had 17 active Boeing 777-2H6ERs , all “duplicates” of the missing one, save their tail numbers. Since then, 3 have been withdrawn, one way or another, from service.
In Jan. 2013 one, with tail number 9M-MRK, was withdrawn and is now stored at Orlando/Sanford International airport .
In April 2013, the “Israeli” one was withdrawn, acquired by GA Telesis, an American-based second-hand planes/plane parts dealer, given a new tail number (N105GT), stored at Tarbes airport in France in October, and then moved to Ben Gurion airport in November .
In March 2014, the third was ‘withdrawn’ by some, as yet unknown, agent as it flew from Kuala Lumpur to Beijing.
I can understand, to some extent, that some people may get a little worked up at the fact that there is a Malaysia Airlines 777-2H6ER plane sitting in Israel, a country whose government and intelligence agencies have a history of involvement in “false flag” terror attacks , but to parlay this into a theory that the Israelis are going to use this plane to make the missing plane ‘reappear’ as part of a fake terror attack is a bit of a stretch, to say the least.
As noted, there is another “duplicate” plane sitting in Orlando. Maybe the US government is planning to use that one in a fake terror attack too? In addition, several Malaysia Airlines 777-2H6ERs were previously owned by other airlines, and all of the remaining 14 active service Malaysia Airlines 777-2H6ERs are scheduled to be withdrawn and replaced with newer aircraft.
So in a few years, there may be 14 “duplicates” of the missing plane sitting in hangars around the world, just waiting to be used, I suppose, in ill-conceived terror attacks to be blamed on Iran, Russia or… take your pick.
Meanwhile it appears that they just want this story to go away, declaring the plane officially ‘lost at sea’ somewhere in the vast expanse of the South Indian Ocean.
This has been an extraordinary episode in aviation history. While many planes have vanished out of thin air, none had so many passengers as MH370 and none were flying at a time everything is trackable and few things can be ‘lost’.

US Military Base Diego Garcia‏*

The Top Secret US air base on the Indian Ocean atoll of Diego Garcia has been in both the mainstream and alternative media, lately, due to the direction Malaysia Airline MH370 was determined to have been flying, as well as claims that a US national who was aboard Flight 370 had managed to activate his smartphone, using Siri software voice commands to send a text and a photo from where he was blindfolded and being held captive, the metadata of these included his GPS coordinates, which located him in a building on this base. This base has been vital to the US war efforts in both Iraq and Afghanistan.
It is strictly off-limits to anyone who is not employed by the military to be there. I first read about it when I was twelve, after voraciously reading ‘The Book of Lists’ by Irving Wallace and David Wallenchinsky from cover to cover. They claimed that Diego Garcia was the new easternmost territory of the US. I actually made a bet with my step-dad’s boss about this,soon afterwards.   He claimed that the easternmost territory of the US was a northeastern tip of Maine, where many flock patriotically, at sunrise on New Year’s Day, to celebrate the first Sun rays to strike America on the New Year. The gentlemen’s bet ended in a deadlock, as he located an island in the Aleutians  of Alaska, which is another 100 degrees further east, crossing the International Date Line.
I’d assumed ever since reading that book,that since the Atoll was in British Territory, that the Royal Air Force had a presence there, as well – as with bases in England, itself, such as Bentwaters, so I have been referring to it for over a month as a Joint RAF-USAF base. But this piece indicates that it is a US Naval facility. The US Navy actually does have more planes the US Air Force. That much,I know but I’m no military historian and hope I can be forgiven about this error, as the place is incredibly secretive.
But that’s not what this video is about.
What it is about is the taboo subject among its current inhabitants about the utterly inhumane and largely untold story of how this base came to be.

Posts : 118
Join date : 2012-10-19
Location : Inbetween dimensions
Day after day, year after year, I become more and more embarrassed to be American. No pride for this country....Such a disgrace!

It is a lack of humanity across the entire globe that needs to be changed. The drivel that these morons are dishing out is incredible on every level. Waiting for the next batch of lies to be unveiled.