Massive UFO caught on Fox News over earthquake center in Westwood, California
By Laron
An interesting explanation is provided by Scott over at UFO Sightings Daily, as to what this actually is. Scott does have a lot of experience around UFO sightings, but, from time to time I catch fake UFO sightings posted on his site which I contact him about because of how obvious they are in not being real sightings. I also highly doubt that ET's would knowingly cause earthquakes.

This one looks genuine, but I haven't done a search on anyone else who may have captured the same event during the live broadcast by Fox.

To me, it looks like a portal of a sorts is opened and then closed. It is possible an object could move in and out of the portal, but we are not made privy to anything other than the portal itself. Based upon information by Charles Hall, ships do not leave that close to the surface because of the impact they have on the surface. They move off a specific distance before moving into hyperspace or whatever technology it is they use to zoom off fast with.

Some commenter's on the video are shouting out 'HARP'. But this could be another event that may be similar to what Clif High via the webbot picked up in relation to distortion waves, such as the recent example I mentioned on transients Facebook page which Clif pointed to from his site, http://ufodigest.com/article/distortion-wave-0403 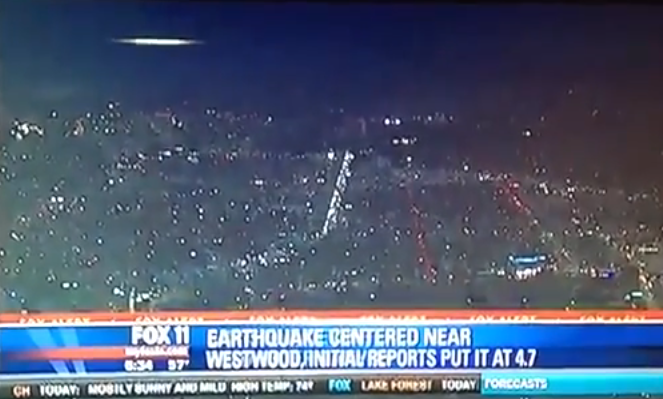 This is an amazing catch. This person was watching Fox 11 News and caught a UFO revealing itself for a few seconds over Westwood, CA right after the earthquake they had. The light first appears to spread from the UFOs bottom center then to its outer edged of the UFO if you watch in slow motion. This would indicate it shot off out of the area causing charged particles around the ship to be seen. I say this because its similar to a Chinese UFO that was recorded in Aug of 2006 and when it left...it made a similar bright burst (Video Below).

Where there are earthquakes, there are UFOs. The two seem to be linked, probably because the underground bases do not have tunnels or doors, but open and close the ground itself causing earthquakes to make room for the UFO to pass through (Friendship Case at Rocca Pia, Italy). And this UFO in the Fox News video is really big and would require a big tunnel to be opened and closed quickly. SCW


Continue to the full article,
http://www.ufosightingsdaily.com/2014/04/massive-ufo-caught-on-fox-news-over.html