Today at 3:54 pm by PurpleSkyz

MessageToEagle.com - When people in North America look up at the sky in the early morning hours of April 15, they can expect the moon to look a little different.

A total lunar eclipse is expected at this time, a phenomenon that occurs when the Earth, moon and sun are in perfect alignment, blanketing the moon in the Earth's shadow.

Although lunar eclipses happen multiple times in a year during a full moon, this eclipse will be a particularly unusual viewing opportunity for North America. 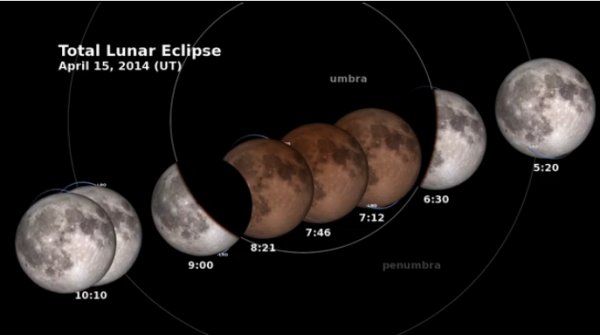 Since the Earth's Western Hemisphere will be facing the moon during the eclipse, the continent will be in prime position to view it from start to finish. In addition, the eclipse will coincide with nighttime in North America. The entire continent won't be able to witness a full lunar eclipse in its entirety again until 2019.

"Sometimes they'll happen and you'll have to be somewhere else on Earth to see them," said Noah Petro, Lunar Reconnaissance Orbiter deputy project scientist at NASA's Goddard Space Flight Center in Greenbelt, Md. "Most [residents] of the continental United States will be able to see the whole thing."


At the eclipse's peak, around 3:45 a.m. EDT, the moon will enter the Earth's full shadow, the umbra. At this stage, the Earth's atmosphere will scatter the sun's red visible light, the same process that turns the sky red at sunset. 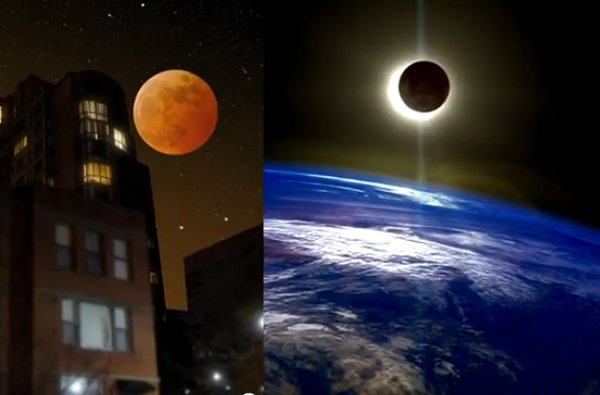 
As a result, the red light will reflect off the moon's surface, casting a reddish rust hue over it.

"It's a projection of all the Earth's sunsets and sunrises onto the moon," Petro said. "It's a very subtle effect, and if any part of the moon is illuminated in the sun, you can't really see it."

Although lunar eclipses are fairly common, Petro said they don't happen every month. Because the moon's orbit is tilted, it doesn't pass through the Earth's shadow each time it orbits the planet. This is the same reason why solar eclipses—which occur when the Earth passes through the moon's shadow—don't occur monthly.


It's not often that we get a chance to see our planet's shadow, but a lunar eclipse gives us a fleeting glimpse. During these rare events, the full Moon rapidly darkens and then glows red. Though a lunar eclipse can be seen only at night, it's worth staying up to catch the show. Image Credit: NASA's Goddard Space Flight Center


Petro said lunar eclipses are a special treat people should take the opportunity to watch, even if it is at a late hour.

"They don't happen all the time, and the sky has to be clear," Petro said. "It really gives you a chance to look at the moon changing."

In addition to being a spectacle for North America residents, Petro said NASA's Lunar Reconnaissance Orbiter (LRO) team would be paying particular attention to this eclipse. The LRO mission, which is currently orbiting the moon, will be plunged into darkness for an extended period during the eclipse. Because the spacecraft's batteries need sunlight to charge, it will be forced to run without recharging longer than usual.

"The spacecraft will be going straight from the moon's shadow to the Earth's shadow while it orbits during the eclipse," Petro said.

While this isn't the first time LRO has orbited the moon during an eclipse, its past orbits have allowed it to pass into Earth's shadow only for a short period. This time, the spacecraft will have to pass through the complete shadow twice before the eclipse ends. However, Petro said the team expects the spacecraft to make it through the eclipse without a hitch.

"We're taking precautions to make sure everything is fine," Petro said. "We're turning off the instruments and will monitor the spacecraft every few hours when it's visible from Earth."

Although LRO would be forced to shut down its instruments for this eclipse, Petro said other lunar eclipses are a great opportunity for the mission to study how the lunar surface cools during these events, giving insight into the materials making up the surface.

While people watch the moon change in the sky April 15, the LRO team will be ready.

"For quite a while, people in LRO have been analyzing what's going to happen during this eclipse," Petro said. "We'll make sure the world knows LRO survived with no problems."