MessageToEagle.com - On April 14, Erich von Däniken, widely considered as the father of the Ancient Astronauts theory is celebrating 79 years. Now you can leave your birthday greetings online!

Erich von Däniken is one of the most successful and influential alternative history authors who have sold millions of books world-wide.

Born in 1935, Switzerland, Däniken shocked the world with his first book Chariots of the Gods, in which he provided his readers with evidence that early humans had contacts with highly advanced civilizations in the distant past. The book became an immediate bestseller in the United States, Germany, and later in 38 other countries.

His latest book Twilight of the Gods: The Mayan Calendar and the Return of the Extraterrestrials deals with the mysteries surrounding the Mayan calendar, its amazing connection to the Ancient Astronaut Theory, and tantalizing information on the extraterrestrials prophetic return to Earth.

When Ridley Scott's highly anticipated movie Promethus hit theaters in 2012, the public became very interested in prehistoric alien visitations. The plot of the movie was described in our article, Prometheus: Searching For Humanity's Secret Extraterrestrial Origins

The interest in the Ancient Astronuats's theory is still very much alive.

A while back, the Graham Hancock community collected questions for Däniken and here you can see part of the interview.

Queestion: It's been about 48 years since Chariots of the Gods was published and much more is known about the ancients. If you were writing it today, what would you change, leave out or add in? - Author: carolb

Erich von Däniken:
If I knew in 1968 what I know today CHARIOTS would be a volume of 1000 pages. And of course every error would be eliminated.


In my boarding school in Switzerland, led by Jesuits, we had to translate some parts of the old testament from one language to the other.

Then I realized, that the God of the bible has none of these minimal qualities.

So I had doubts in my own religion, and I simply wanted to know, what other communities in antiquity say about their God.

Question: Do you think it possible that ancient man advanced to the level and ability to travel off planet ourselves, perhaps exploring the solar system and further? Certainly the Vedas give many accounts of this as fact. As well as aliens visiting here, were we visiting other worlds too, making aliances and perhaps enemies? - Author: brucenyc1

Erich von Däniken: According to the theory of evolution we are the first intelligent race on this planet, but according to the old holy writings, there must have been some high civilisations in the deep past. This controversy is at the moment not solvable.

Question: What was the most convincing evidence you have encountered that suggested the presence of ancient astronauts? And what do you consider to be the oldest evidence of contact? And what is the best evidence out there that is best interpreted as being the product of extraterrestrials as opposed to being of the product of a technologically-advanced human culture in antiquity? - Author: annj1123, cladking, Olver X, wordsmyth

Erich von Däniken: We have to differentiate between archaeological facts and old holy writings.

In archaeology the thumb-stone of Palenque is absolutely convincing, although archaeology sees it different. The same thing is thru for the plane of Nazca in Peru. There archaeology only look for some sorts of >Cults<, and never ask for the reason of the cult.

Finally it will turn out sooner or later, that the great pyramid does not belong to Cheops, but is much older. And in the pyramid we will discover some old writings.

In the literature the best case is the book of Enoch, although theology sees it completely different. Enoch is the only one who writes in the first person and who even gives the names of his extra-terrestrial teachers. 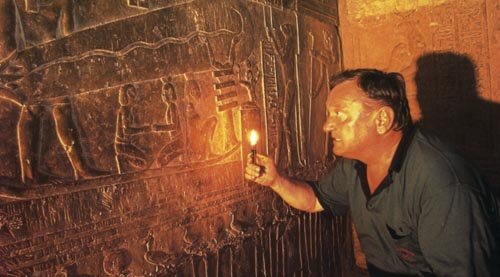 Erich von Däniken in Dendera, Egypt. Image credit: Däniken
Question: Hi Mr. Von Daniken, I read Chariots of the Gods as a child after seeing the episode with the same name on In Search Of... with Leonard Nimoy.

One thing has always bothered me and hopefully you can explain. All researchers who believe in the ancient astronaut theory have one thing in common: they assume that our ancestors were such blithering idiots that they were intellectually incapable of engineering feats such as building the Pyramids on their own, so therefore ancient aliens theory is true. With the archaeological evidence piling up in favor of the ancients being anything but dumb cavemen, how do the AA theorists still believe that there MUST have been alien intervention?

I'm not saying it's an impossible hypothesis, because it isn't, but I just don't see why it's necessary. It's a form of the god of the gaps argument. - Author: Aine

Erich von Däniken: This is a misunderstanding. It is not my idea, that extra-terrestrials constructed pyramids and other gigantic buildings.

All these fantastic buildings were made by humans. The question is WHY?

The traditional answer is: for the Gods. For which Gods? Traditional answer here is: The natural gods, like the sun, the moon, the lightening, the earthquake etc. and of course humans of the past had many natural religions. But soon as information comes from heaven to earth you can forget the natural explanation. The sun or the moon etc. does not speak to humans and with speak I mean very exact informations about the calendar, mathematics, and other planetary systems outthere.

Question: Since the release of your first book, have you ever reconsidered the origin of the world's mysteries to be from previous unknown civilizations rather than extraterrestrial? - Author: getClyde

Erich von Däniken: Of course I am familiar with the story of ATLANTIS or MU. But again it is contrary to the theory of evolution.

Question: What do you think about the theory that ancient astronauts were not physical beings coming here on physical spaceships, but may in fact be visiting here from another dimension? - Author: michael seabrook, lukehancock

Erich von Däniken: In the case of Enoch, Abraham or Ezekiel (and others) we have it definitively to do with physical appearances. Descriptions like: Smoke, Fire, loud noise, metallic feets(Ezekiel) wings etc. are all physical.

Question: In your opinion, what star system/planet are these extraterrestrials from? Sirius, as proposed by Robert Temple? Venus, as it was likely in the 'Goldilocks zone' before Earth? Or Mars, as it once had oceans (and thus probably had more atmosphere) and it seems to have evidence of ruins? Or what? Thanks for letting us interview you. - Author: wordsmyth

Erich von Däniken: In our solarsystem Mars is the only candidate. But I think they came from very far away in some sort of generation-spaceship. Altough some names of strange planets are mentioned in old holy writings, they are not helpful to us. We don't know the names of the planets outside our solarsystem. 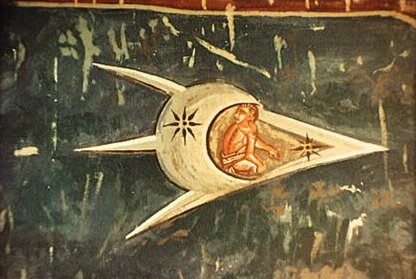 Curious wall painting from the Middle Ages
Question: You obviously believe we have had direct contact in the past. Do you think this contact could be cyclic and therefore we will have direct contact in the future and if so when? And do you have any important 'near future' events that you are anticipating? - Author: seaking, hansmittendorf, lukehancock

Erich von Däniken: Practically every old culture were waiting for the returning of some Gods. The same is truth with our today religions. They all wait for someone to return. (See my book: Twilights of the Gods) And they will return. According to the indications I have collected, we were visited approximately every 5000 years. And I expect the next visit within the next 20 years.

Question: What advise if any, would you give the next generation of ancient inteligence theorist? - Author: MrCymatics

Erich von Däniken: Do not only think in terms of Sir Francis Bacon, the inventor of scientific methodology, but also in terms of Professor Paul Feierabends: Anything goes.


Chariots of the Gods -The Series is based on the books of Erich von Däniken who more than twenty years ago first presented his theory of extraterrestrial contact with the ancient world - a theory so incredible yet so logical that it has become part of a wide ranging debate that continues stronger today.

His examination of ancient ruins, forgotten texts, and other archeological anomalies points to evidence of extraterrestrial intervention in human history.

We thank the author Graham Hancock and his readers for putting together this interview and Erich von Däniken for taking time and share his views with the public.

If you are a Däniken fan remember to send you birthday greetings to him! His birthday is on April 14!