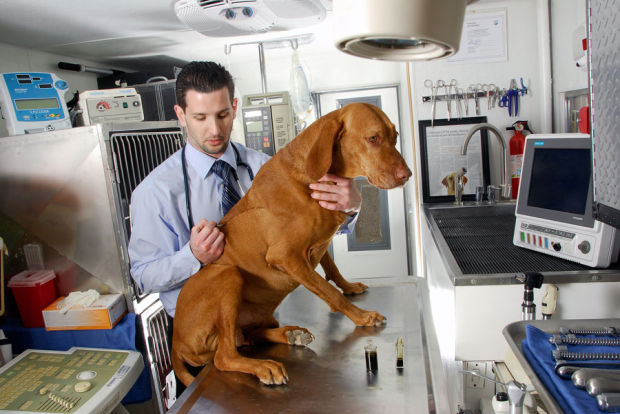 Dr. Douglas Kramer and his dog Mason are inside his mobile surgical truck during an application of cannabis oil to the skin of Mason, who had already undergone multiple surgeries to remove cancerous growths. Stories abound about changes in sick and dying pets after they’ve been given marijuana.
By Sue Manning
Until she introduced “magic cheese” to her sick and aging bulldog, Laura Bugni-Daniel watched him suffer for two years. He’d spend his days lying down or throwing up.
Today, at age 12, he plays like a puppy through the day, his fur is soft and he sleeps at night, soothed not by magic, but by the dose of marijuana in that cheese.
Bugni-Daniel, of Divide, is part of a growing movement to give medical marijuana to pets in pain. Many urge caution until there’s better science behind it. But stories abound about changes in sick and dying pets after they’ve been given cannabis – even though it isn’t a proven pain killer for man or mutt, and it’s an illicit drug under federal law despite being legal for people in 19 states and the District of Columbia.
Leading the charge is Los Angeles veterinarian Doug Kramer, 36, known as the “Vet Guru,” who felt it was his duty to speak out while he has no family that would feel a verbal or financial backlash.
“I grew tired of euthanizing pets when I wasn’t doing everything I could to make their lives better,” he said. “I felt like I was letting them down.”
Pot eased his Siberian husky’s pain during her final weeks, after she had surgery to remove tumors. Not only did Nikita stop whimpering while using cannabis, but she started eating, gaining weight and meeting him at the door again.
It gave him six extra weeks with his dog before he had to euthanize her, he says. It wasn’t a cure, but he thinks it freed her of pain and improved her last days.
Related video clips:

VIEW: Pot Therapy for Pets - Special Report
Some other vets contacted said they share Kramer’s view on pot, but they wouldn’t talk on the record for fear of arrest or retaliation.
Kramer hasn’t lost any clients over his view, but he was asked not to return to some of the clinics where he volunteered or relieved other vets because of concerns over the negative image his advocacy creates, he said.
***
Dr. Duncan Lascelles, a professor of surgery and pain management at North Carolina State University College of Veterinary Medicine, thought about studying marijuana a decade ago. He didn’t, not for lack of interest, but because the timing was wrong.
“I have been considering looking at that field again because I think it does have a lot of potential,” he said.
He also figures those all-important grants needed for research will be available now.
Testing could take 10 years or more to be sure a pain killer will be effective and free of side effects, Lascelles said.
Kramer said it’s unconscionable to let a decade pass, when millions of pets will die of illness and old age.
Vets who want traditional testing point to a study by two Colorado animal hospitals that compared the number of dogs treated for what appeared to be accidental marijuana overdoses between 2005 and 2010 with increases in the number of marijuana licenses issued. As registrations increased 146-fold, the number of sickened pets went up four-fold.
“Sometimes public sentiment and activity gets ahead of the scientific background and that can be dangerous,” said Barry Kellogg, senior veterinary adviser to the Humane Society of the United States.
While two dogs with pot in their system died in the Colorado survey, hallucinogenic reactions may make dogs wobbly on their legs, raise their pulse and cause dribbly urine, said Dr. Karl Jandrey, an emergency and critical care vet at the Veterinary Medical Teaching Hospital at the University of California, Davis.
***
But pot clinic managers say that a proper dose of the drug will prevent a bad reaction.
Jessica LeRoux of Twirling Hippy Confections in Denver made custom treats that helped extend the life of her last service dog, a black Lab-border collie mix named Thor.
“I got the 15th year out of that relationship because of the product I made for him,” she said.
Old or ailing pets who take cannabis usually experience an immediate boost in appetite and relief from pain. That lets them get around, relieve themselves without help, sleep better and enjoy their families until age or disease catches up, LeRoux said in explaining how the cannabis helps pets. 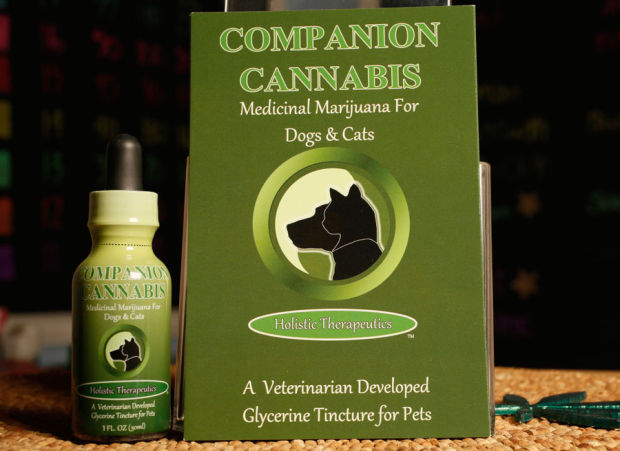