OUT OF MIND » HEALTH & MEDICAL INFO » MARIJUANA & NATURES MEDICINALS » Another Reason Marijuana is Illegal: It Prevents the Spread of HIV

Another Reason Marijuana is Illegal: It Prevents the Spread of HIV 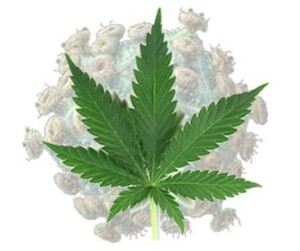 27th April 2014
By Marco Torres
Guest Writer for Wake Up World
The overwhelming evidence of the curative powers of marijuana and cannabinoids leave little doubt that the pharmaceutical industry is behind marijuana prohibition laws. The amount of research now validating the truly remarkable nature of this healing plant is simply enormous.
The U.S. Patent 6630507 was specifically initiated when researchers found that cannabinoids had specific antioxidant properties making them useful in the treatment and prophylaxis of wide variety of oxidation-associated diseases, such as ischemic, age-related, inflammatory and autoimmune diseases. Cannabinoids are found to have particular application as neuroprotectants, for example in limiting neurological damage following ischemic insults, such as stroke and trauma, or in the treatment of neurodegenerative diseases such as Alzheimer’s disease, Parkinson’s disease and HIV dementia.
Another U.S Patent 20130059018 was initiated following the discovery that cannabinoids prevent cancer cells from dividing and multiplying. According to the patent document “cannabinoids, including THC and Cannabidiol, promote the re-emergence of apoptosis so that tumors will stop dividing and die”. In 2003 the Netherlands became the world’s first country to make cannabis available as a prescription drug in pharmacies to treat cancer, as well as multiple sclerosis and HIV patients.
Marijuana Prevents the Spread of HIV
According to findings published in the journal PLoS ONE, researchers have confirmed that marijuana-like chemicals trigger receptors on human immune cells that can directly inhibit a type of human immuno-deficiency virus (HIV) found in late-stage AIDS.
Medical marijuana has been typically prescribed to treat pain, debilitating weight loss and appetite suppression in patients with advanced AIDS. However, Mount Sinai School of Medicine researchers have produced the first study to reveal how the marijuana receptors found on immune cells — called cannabinoid receptors CB1 and CB2 — can influence the spread of the virus.
Marijuana researcher and activist Jason Mihaldas says the studies finally justify what the pro-marijuana community has always known;

“Decades of anecdotal and empirical evidence are now being validated by the scientific community, but it’s unfortunate they are using this research for their own selfish motives — to take marijuana from its raw medically effective form to one where it will be medically ineffective with processing agents, altering what it was naturally designed to do … heal”.

Unfortunately, the scientists will use the research on the effects of these receptors to develop new drugs to benefit the pharmaceutical industry.
“We knew that cannabinoid drugs like marijuana can have a therapeutic effect in AIDS patients, but did not understand how they influence the spread of the virus itself,” said study author Cristina Costantino, PhD, Postdoctoral Fellow in the Department of Pharmacology and Systems Therapeutics at Mount Sinai School of Medicine. “We wanted to explore cannabinoid receptors as a target for pharmaceutical interventions that treat the symptoms of late-stage AIDS and prevent further progression of the disease without the undesirable side effects of medical marijuana”. 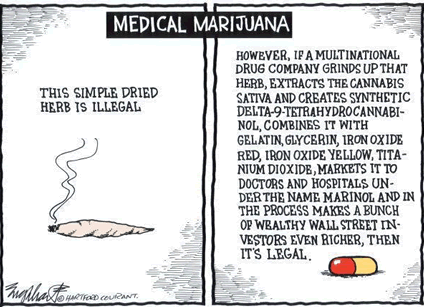 HIV infects active immune cells that carry the viral receptor CD4, which makes these cells unable to fight off the infection. In order to spread, the virus requires that “resting” immune cells be activated. In advanced AIDS, HIV mutates so it can infect these resting cells, gaining entry into the cell by using a signaling receptor called CXCR4. By treating the cells with a cannabinoid agonist that triggers CB2, Dr. Costantino and the Mount Sinai team found that CB2 blocked the signaling process, and suppressed infection in resting immune cells.Nonpsychoactive cannabinoids, such as cannabidoil, are particularly advantageous to use because they avoid toxicity that is encountered with psychoactive cannabinoids at high doses useful in the method of the present invention. CBD (Cannabidiol), one of the main constituents of the cannabis plant has been proven medically to relieve many diseases including the inhibition of cancer cell growth. Recent studies have shown it to be an effective atypical anti-psychotic in treating schizophrenia. CBD also interferes with the amount of THC your brain processes, balancing the psychotropic effect of marijuana. That is precisely why the power of raw cannabis is turning heads.
The Mount Sinai team infected healthy immune cells with HIV, then treated them with a chemical that triggers CB2 called an agonist. They found that the drug reduced the infection of the remaining cells.
“Developing a drug that triggers only CB2 as an adjunctive treatment to standard antiviral medication may help alleviate the symptoms of late-stage AIDS and prevent the virus from spreading,” said Dr. Costantino. Because HIV does not use CXCR4 to enhance immune cell infection in the early stages of infection, CB2 agonists appear to be an effective antiviral drug only in late-stage disease.
As a result of this discovery, the research team led by Benjamin Chen, MD, PhD, Associate Professor of Infectious Diseases, and Lakshmi Devi, PhD, Professor of Pharmacology and Systems Therapeutics at Mount Sinai School of Medicine, plans to develop a mouse model of late-stage AIDS in order to test the efficacy of a drug that triggers CB2 in vivo.
Now that the scientific evidence is being made public, a concerted effort must be made from all nations to end marijuana-prohibition laws. Holding or possessing a plant should never be a criminal offence and the corporate greed at the source of these laws is now coming to light.
Previous articles by Marco:

About the author:
Marco Torres is a research specialist, writer and consumer advocate for healthy lifestyles. He holds degrees in Public Health and Environmental Science and is a professional speaker on topics such as disease prevention, environmental toxins and health policy.
This article was reposted with the permission of the kind crew at preventdisease.com

OUT OF MIND » HEALTH & MEDICAL INFO » MARIJUANA & NATURES MEDICINALS » Another Reason Marijuana is Illegal: It Prevents the Spread of HIV