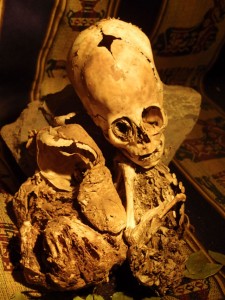 3rd May 2014
By Sergey Baranov
Guest Writer for Wake Up World
It is yet to be known how old and whether or not the body described below belongs to an alien race or is a different human species (which would both be significant since neither are present in history books) until the sample of this strange skeleton can be carbon dated and a DNA test done. But based on what I see, I can tell with great certainty that whoever it is, he or she does not look like my neighbor.
It was a regular morning when I was invited to explore the surroundings of Cusco during my first month after moving to Peru in April 2009. It was a friend of mine who took me around to see some interesting stones in one of the local museums in Huaru near Cusco.
Even though my curiosity was well ignited, more so, I was glad to shatter my loneliness which had become my first friend in Peru.
Visiting the museum was quite impressive. The echo of the ancient world was heard among the unusual stones. Among other things, there were two items, which attracted my attention most in that moment. One of them was a stone which made different sounds when knocked on with another stone. Playing it like a drum, I was naturally trying to understand the phenomena. Then leaving the concert behind, I moved to another stone which was about three foot long and appeared to be perfectly drilled through.
At that time, I barely paid any attention to the many stone tablets and other artefacts displayed in the museum. It wasn’t until a year later that I decided to return to this museum to take another look. While there, I asked who the founder was and whether or not I could talk to him in person. I was told that the museum was founded by anthropologist Renato Santiago Davila Riquelme who had another museum in a nearby town minutes away.
Before the clouds changed their shape, I was already talking to the author of these findings. It wasn’t long before we bonded our friendship while sharing our ideas about the ancient world, thinking of ways to inspire academia to look at an alternative history.

Beyond Paracas
During our conversation, he offered me to take a look inside. Walking through the rooms, I was further astonished by unusual elongated skulls which he had found around Cusco. But my jaw dropped when I stumbled upon Wyki (wayqui – a friend from Qechua) a small skeleton found on the Apu Wirochochan (mountain of the God) near Cusco.
Renato told me that he found the remains while exploring the area which he described had a crater surrounded by meteorites. He said the bodies were intact except the left parietal bone of the Wyki which was detached and later glued together for the exhibition. This skeleton had a skull and body with only legs missing. The size of this skeleton was about a foot and a half long with the head being of the size of the body.
Looking at him I had a feeling that this is something of a great importance and a potential paradigm shifter if proven to be an alien species.
What struck me most while examining its unusual anatomy is the open fontanel of the skull. We know that the fontanel is a feature of an infant’s skull. But how could an infant have molar teeth? 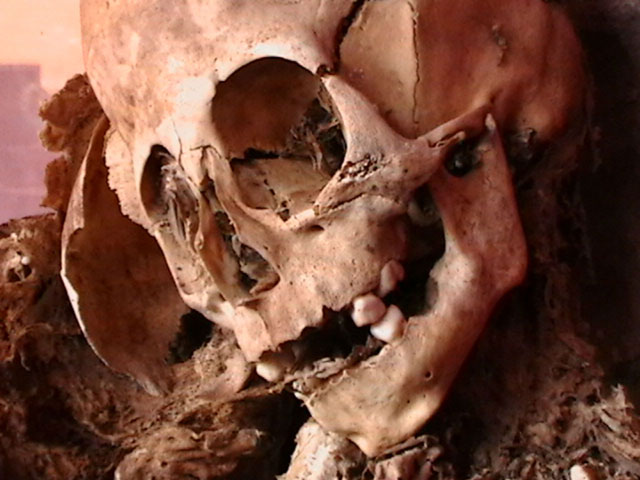 But this wasn’t the only anomaly. My wonder grew stronger when I realized that what I saw in his/her right orbit was a type of a cartilage, an absent feature in the human’s eye anatomy. Looking at its chin wasn’t less amazing. It was quite pronounced (see video #1 in ‘Resources’ below).
But there was more! There was an even smaller body, half of the size of the Wyki lying next to it and which was found together with it. It made the impression that this baby was a child of the Wyki. But “a baby having a baby?’’ – I thought for a moment.
The Greatest Question Never Answered
While staring at these unusual pieces, we kept talking, expressing all kinds of wild theories. Renato’s thought was that Wyki was an alien female who was inseminated by a human which resulted in an overwhelming pregnancy which simply exploded, killing both. It was a shocking theory at first and yet not entirely impossible. Of course, I would have hard time to imagine myself in the role of the inseminator, but my likes and taste might not be shared by ancient dwellers. 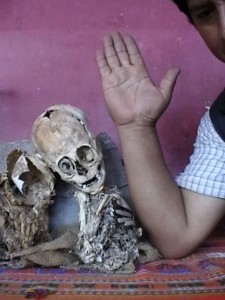 Staring at Wyki, I shared with Renato my feeling that it would be better not to expose it yet until more information is gathered. But Renato, most likely out of excitement, went ahead and made it public. It was a dinner time when I was watching the news on the national Peruvian TV with my family, when we saw a reportage showing Renato presenting the Wyki to the world. Renato did not hold words back, bravely stating that these were the guys who helped the Incas to build the amazing monuments around Cusco and Sacred Valley.
Anticipating great discovery, I didn’t know where to start. It wasn’t until later when I begun to feel like I was carrying a Genie in the bottle hermetically sealed with antiquity laws. Being inspired yet naïve, I thought I only had to find a trusted hand to give the sample to, not realizing the official process involved. I only learnt that all later, when I was honored to meet a Russian scientist who had an access to variety of labs in Moscow. But after sharing the story with him, I was rather disappointed, learning that he could not take the sample from my hands but it had to be done officially to be able to investigate it properly.Almost choking on my food, I felt like I need to talk to him about getting a sample of Wyki for possible future testing, something we discussed earlier but never with urgency. When I called him the next day, he told me that he was already contacted by the Ministry of Culture and scheduled for a talk. Eventually, and fortunately for Renato, he was granted permission by the cultural authorities to keep the Wyki in his possession. Meeting Renato later, I was given permission by him along with the sample of the skeleton to carry out the investigation (see video #2). I felt this finding could hold the key to the greatest question never answered — whether or not we are alone in the Universe.
Learning that it was illegal to export antiquities without the permit, I have begun to feel that Wyki was becoming rather a burden than a discovery. It wasn’t until recently when I decided to share my story, realizing that it might take a lifetime to move forward if kept quiet (see video #3).
Now that the words are out, I truly hope to find a solution which will both become a relief and a contribution to the slim body of knowledge we have about the ancient world.
Resources: 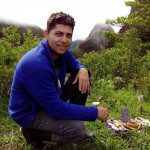 Sergey Baranov is an author of the book “Path”. He currently lives in Sacred Valley of the Incas, Cusco, Peru.
Part of Sergey’s ‘awakening’ has been his work with shamans and sacred medicine plants in North and South America. In his search for truth and the meaning of life, Sergey’s path took him through four continents, four countries, four cultures, and four languages, far beyond the walls of religious institutions and far above the boundaries of the “ego”. His book “Path” is Sergey’s story of his search for answers to intimate questions and a true connection with Nature.
For more information, visit shamansworld.org or connect with Sergey on Facebook.