The Burden of Truth and Knowledge

Reposted from: Backdoor Survival | by Gaye
These days, the enlightened carry a heavy burden of truth and knowledge that, without conscious effort, can be both exhausting and debilitating.  One merely has to look around, read some news, and watch a little television to realize that there is major subterfuge going on.  Knowing that deceit and trickery is around every corner, we are forced to dig deep to examine facts, evaluate actions and derive truthful conclusions based on evidence and fact rather than spin and political innuendo.
Not only is that time-consuming, but that truth and knowledge can begin to eat at our very core, manifesting itself in the relentless and unstoppable pursuit of even more knowledge, more facts and sadly, more acceptance that our world as we have known it is doomed.
Just what exactly is happening to cause this pursuit?  Let us start with just a few examples. 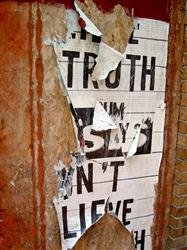 Need I go on?  I think not since the enlightened are already aware of the malfeasance that attempts to control and manipulate our lives.
Last week I posed the following question on Facebook:

I have been musing with the Survival Husband on the burden of knowledge versus sheeple oblivion. Does anyone else feel it? The burden, that is.

The Ultimate Burden of Knowledge
I was overwhelmed with emails that related anecdotal stories of the personal strife created by this very same muse.  Family members accusing them of being crazy, friends and co-workers tagging them as nut jobs, and the despondency created when trying to awaken the blind to the truth about our world were a recurrent theme.
In a perfect world, I would like to think that we – as an educated and modern society – would face these burdens together.  But alas, our world is not perfect.  Not that it ever has been but now, with the proliferation of the electronic age, we are more aware of just how imperfect the world and society has become.  This same electronic age, and the internet specifically, has allowed the powers-that-be to create false flags and falsehoods with rapid deployment via recognized news channels. Who is to blame the lazy for accepting such lies at face value?
Many of us find that our shoulders are not strong enough to carry this burden alone.  And yet we attempt to do so in the very best way we can.  We stock up on food, we learn survival and coping skills and we become accustomed to living with less not because we have to but because we may be forced to one month, one year, or even ten years from now.  It can be a lonely journey.
How lovely it would be get up each morning, put on a happy face and go about the day.  With a few extra dollars in our wallet, perhaps we would purchase some new shoes or go spend $100 on a night out on the town.  An emergency fund?  What is that?  Pay off credit card debt?  What for?  Just keep on smiling, keep on having a good time and assume that if something bad happens, the government or those crazy preppers will take care of us.
And so, if you are like me, you do your best to carry on in spite of it all.  Some days are better than others.
After work, if the sun is out and the chores are done, you might take a hike or hit the lake in your kayak.  On other days, things are not so pleasant.  Time is spent reading, writing, learning, sharing – doing whatever it takes to keep spirits alight and optimism – now cautious – alive.
The Final Word
I share this short essay with you today as much as a catharsis for myself as a message to let you know that you are not alone as you internalize your knowledge and attempt to come to terms with its affect of your life, your loved ones and your moral values.
We all need coping mechanisms and tools to deal with this very real human condition called survival.  As you pick your way among those tools, be secure in the knowledge that by learning and living to be self-sufficient and self-reliant, you are taking control of your life and living it in the very best way you can.
Enjoy your next adventure through common sense and thoughtful preparation!
Gaye

When I first started Backdoor Survival, my goal was two fold. First, I wanted to share my angst and concern about our deteriorating economy and its impact on ordinary, middle-class folks such as myself.  And second, I wanted to become a Prepper of the highest order and to share what I was learning (and am still learning) along the way. www.backdoorsurvival.com