$10,000,000,000,000,000,000,000,000,000,000,000,000,000.
Amongst other projects, this money will be used to buy out all oil corporations, banks and pharmaceutical cartels. And it will zero out (permanently cancel) all personal, corporate and national debts worldwide. More about universal debt forgiveness and the imminent global debt jubilee can be found here. The Saint Germain World Trust resources are additional to, and separate from The World Global Settlement Funds.

The NESARA money was originally scheduled to be released in the year 2000, but the Bush White House and its banking and legal conspirators worldwide prevented the disbursement. And through corporate pan-global control of mainstream media outlets, nearly all knowledge of NESARA's existence was suppressed. This is now changing.

When the NESARA global prosperity programmes are openly and publicly announced, perhaps during June or July 2014, they will permanently change human civilisation in every money-related way.

The whole human population will benefit from NESARA. Earth is a most abundant planet. There is more than enough gold-backed human money currently in existence on Earth for each and every human being to be a GBP millionaire without debts of any kind. GBP = Great Britain Pound. NESARA is about sharing the resources of the planet around fairly. And NESARA is about putting benevolent banking systems in place worldwide to deliver this monetary fairness. No individual anywhere on Earth will be beyond the reach of the NESARA wealth redistribution programmes. And no individual or organisation anywhere on Earth will be able to stop it.

NESARA will cancel all credit card, mortgage and other bank debt due to illegal banking and government corruption worldwide. Income tax will be abolished. A new 14% flat rate tax on non-essential new items will provide the revenue stream for national governments. There will be increased benefits for senior citizens. In the USA, there will be a return to Constitutional Law at every level of the legal system.

fair and balance? you decide!


What is NESARA?
An excuse to plunder and pillage America under the false pretense of peace and prosperity and an imaginary return to constitutional law.

Don't be deceived by the fake name change...

See the Bible Codes at

He's an evil, wicked, liar who wants to destroy mankind. Wake up People!!!

[size=18]The Lies of the 5th Dimension & The Coming Lies of Maitreya - Who is now being replaced by Sananda! Why? Because Maitreya was destroyed by our Orgone! [/size]www.orgoneblasters.com Sananda has been stood up to replace him!


NESARA is the economic and political program of the Antichrist. Known as the National Economic Security And Reformation Act it is better described as a
National Evil Snake, Annunaki (and) Reptilian Association or simply,
Neo-logical Excrement Spread Artfully Round America
They promote it as a Restoration of our Constitutional freedoms, cures for illnesses and new energy sources, financial and banking improvements, removal of corrupt government officials, and the beginning of more peace on Earth and more --  all alleged improvements to begin with NESARA’s announcement.
Sounds good but we know it's a lie!
Deceit - Deception - Lies!
They will use this platform to get their feet on the earth and then once they are here they will blame their failures on not being able to implement their program on true believers of the Most High and begin a cleansing program on earth!
Others refer to it as "First Contact."
Our first official publicized contact with Space Aliens will involve a  treaty that implements NESARA here in America. This will be enforced on the entire world as well.  These aliens will not look like little green men. They are Anuk, tall, angelic humanoid creatures and Tall Greys with humanoid bodies coming as Ascended Masters, Space ship Commanders, Messiahs, those who have reached Godhood, angels etc...Sananda, Maitreya, Al Gore, and Obama are part of this clan  as well.
These Tall Greys, Lizards and Anuk are fallen angels, kicked out of heaven with Lucifer when he rebelled against the Most High God. There is nothing new about NESARA. It is the same program Lucifer implemented as a high ranking cherub before he rebelled against the Most High God.
In Revelation chapter 13 the Bible describes the second beast, the False Prophet, who will enforce a worldwide economic program. NESARA fulfills this prophecy.
Will Obama step into the role as the False Prophet?

NESARA is a foot in the door for Satan's alien forces. If they can get people to buy this "peace and prosperity" agenda then they are getting acceptance to come on earth and implement it.  Once these Reptiles and Lizards are in control they will ratify parts 2&3 of NESARA that nullify part 1 and begin their own agenda of cannibalism and murdering the inhabitants of America.

Check out their main leader, "Christ Michael" who goes by the Name Hatonn ( a close resemblance to Satan, SA TONN) who admits he's a tall Grey Alien

Are the NESARA leaders the Ashtar Command? (see their humanoid pics)

Aliens are liars. They are incapable of telling the whole truth, and nothing but the truth about anything. They are fallen angels, Lucifer's boys playing "we want to help mankind" theology. They also refer to themselves as Omegans.

Don't listen to them. Don't believe them.

The proponents of NESARA are supposed to be "gods, those who reached godhood" they are liars and they are subservient to the Most High God who controls them like puppets on a string and will only allow them to bring forth their lying Satanic agenda when He, and He alone, decides to let them to punish America for its idolatries and perversions.


There are two leaders of NESARA. Sananda Immanuel also known as Sananda Jesus and St. Germaine. Germaine will present NESARA, "Jesus" will try and deceive mankind he's the Jesus of the church and Christianity. The Beast Prophets in the churches will hail him as the Jesus of the Bible. He is a fake, fraud, wannabe, and deceiver. The deceptions in the last days are going to be good folks, how many would see this guy and not think he's the Jesus of the Bible that they've been conditioned to believe? They have seen this face and picture of "Jesus" all their lives. This isn't what Jesus looks like. The churches have been plastering pictures of Sananda Jesus for years deceiving their congregations that this was Jesus the Messiah who died on the cross 2000 years ago. This is a picture of Sananda Jesus. The Jesus of the Bible DOES NOT look anything like this. 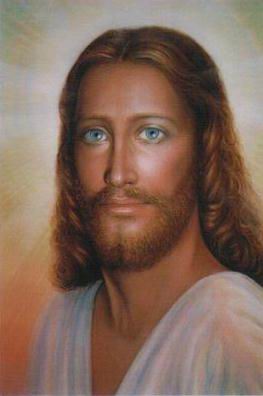 NESARA sounds good until you realize you're selling your soul to the devil to save a few bucks. It's just exchanging one global agenda for another. NESARA vs.Illuminati with Satan playing both sides.

Yes, we would all like everything NESARA promises to give, but on OUR TERMS, not THEIRS, and without mocking the depiction and resemblence of our Lord Jesus Christ with their Germaine and Sananda.

How many will be deceived by Sananda when they realize he "looks" and "sounds" just like the Jesus of the Bible? Will they know this is a DECEPTION?

"For many shall come in My Name saying, I am Christ; and shall deceive many" Matt. 24:5

Their plan is to overtake the US government, implement Alien Disclosure resulting in First Contact, and then  finish off  their staged productions with a grand finally: THE SECOND COMING OF JESUS.

Their charades will deceive many. The pastors in the churches will support them and lead many people into the pit of hell for following this false Jesus.

The Day of Declaration

NESARA:
The Political Agenda of the Beast

Germaine Confirms that it's the Omegans behind NESARA, and his army is called the Omegans:

Amusing declarations from the NESARA Anuk's in charge:

Commander Liar Hatonn says:
"The second coming package deal is going to be a sacred event, period."
Sounds like someone desperately trying to sell a used car.


see my other website on NESARA Omegans Are Liars

Don't miss http://www.crystalcityfraud.com the home of Maitreya, Germaine, Sananda and
the other Luciferian frauds

We Can Annihilate Them

We Are... THE RESISTANCE!


Prayer is a confession of one's own unworthiness and weakness.
Mohandas Gandhi

Heeeehaaaaaaaaw.......I love it Nannee.How many times has it been tomorrow and it has not happen? Maybe that my next thing to research, but then again it is just a waste of time.

» NESARA announcements expected in 2016
» NESARA announcements expected in 2017
»  http://nesara.co/:"All of the information on this website has been provided by the KOS. Please share this widely. There have been many websites on NESARA providing disinformation. This is a Divine Gift. The TRUTH about N.E.S.A.R.A. Law".
» Sensationals appear when least expected by the hu-being
» CERN's LHC Expected to Restart Within Days