16 Signs That People Are Becoming Stupider

16 Signs That People Are Becoming Stupider 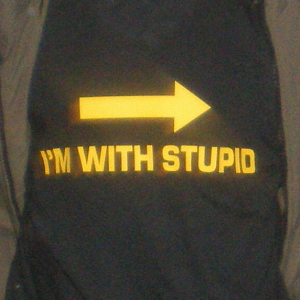 Does it ever seem to you like people are becoming stupider than ever? There have always been people out there that have been a few cards short of a full deck, but these days it seems like more people than ever are a few fries short of a Happy Meal. Certainly our education system plays a major role in this. Our children are being systematically "dumbed-down" by our public schools and millions of them are graduating from high school as dumb as a rock. And the endless hours of mindless entertainment that most of us are addicted to certainly is not helping matters either. Will we eventually become a society where only a small minority possess critical thinking skills? In our world today, logic and reason seem to be in very short supply and the sheeple seem to have taken over. As I wrote about recently, in this day and age it is more imperative than ever that we all learn to think for ourselves. Unfortunately, most people do not seem to be doing that. Most people seem content to let their televisions do their thinking for them. Way too many people have a blank look in their eyes as if they aren't even fully there. But when people are not thinking clearly, they tend to act very foolishly. From the very top of our society to the very bottom, people are doing some really stupid things.

The following are 16 signs that people are becoming stupider....

#2 A whole host of medical studies have shown a connection between cell phones and cancer. The World Health Organization has even admitted that cell phones can cause cancer. But nearly all of us continue to use cell phones very heavily.

#3 Genetically modified crops have been shown to have some very negative effects on the environment and on human health. But the USDA has approved 80 different genetically engineered crops and has never denied a single one. At this point, approximately 70 percent of all processed foods in the United States contain genes that have been genetically engineered.

#4 The TSA is entrusted with making sure that no terrorists get on board our airplanes. But the TSA has been hiring new employees without even conducting background checks first to make sure that the new employees are not terrorists....

In a move that could affect security at airports around the nation, the Transportation Security Administration confirmed Wednesday it had such a backlog of background security checks, airport employers were allowed to hire any employee needed.

TSA officials said the background checks are delayed, but they are processing them as fast as they can.

TSA also will complete background checks on accepted applicants at a later date.

#5 In Los Angeles, it was discovered that four TSA employees were taking huge bribes to allow suitcases full of "cocaine, methamphetamine and marijuana" to pass through airport security. But the federal government thinks the TSA is doing such a good job that their duties have been expanded to include buses and subway stations.

#6 Barack Obama wants to convince all of us that it is not a big deal that he is now admitting that the "New York girlfriend" in his 1995 autobiography "Dreams From My Father" was actually a "composite character". Tens of millions of Americans will believe him.

#7 Down in Florida recently, a frightened wife was able to struggle free from her abusive husband who was choking her and fire a single warning shot into the ceiling. So who is the law coming down on? It is the abused wife that is going to be sentenced to 20 years in prison.

#8 A total of $205,075 was spent to move a single bush that was standing in the way of a highway-renovation project in California. It turns out that an identical bush could have been purchased at a local store for less than 16 bucks....

The bush—a Franciscan manzanita—was a specimen of a commercially cultivated species of shrub that can be purchased from nurseries for as little as $15.98 per plant. The particular plant in question, however, was discovered in the midst of the City of San Francisco, in the median strip of a highway, and was deemed to be the last example of the species in the “wild.”

#10 Obama's top science adviser, John Holdren, has suggested that we should extensively use geoengineering to purposely cool the climate of the earth. The following is how CBS News described one of his ideas for accomplishing this....

Shooting sulfur particles (like those produced by power plants and volcanoes, for example) into the upper atmosphere, an idea that gained steam when it was proposed by Nobel laureate Paul Crutzen in 2006. It would be "basically mimicking the effect of volcanoes in screening out the incoming sunlight," Holdren said.

Apparently Holdren never watched The Matrix, because if he did he would know that blocking out the sun is a really, really bad idea.

#11 There are 1.4 million gang members living inside the United States today and illegal immigration is totally out of control. But the Obama administration has decided to make border security even weaker by pulling 900 National Guard troops away from the U.S./Mexico border.

#12 In Maryland, one man recently called 911 to report to the police that someone had just stolen his marijuana. Needless to say, the man never got his marijuana back.

#14 Burger King is testing a new ice cream sundae that comes with two strips of bacon crammed into it. There are some Americans out there that will actually eat such a thing.