New Obama Executive Order Pushes Us Closer To A North American Union And A One World Economic System Fri May 04, 2012 9:18 pm 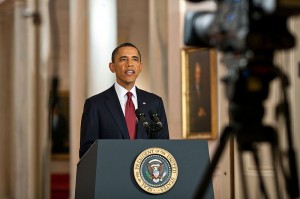 When it comes to Barack Obama, one of the most important things to understand is that he is a committed globalist. He firmly believes that more "global governance" (the elite don't like to use the term "global government") will make the world a much better place. Throughout his time in the White House, Obama has consistently sought to strengthen international institutions such as the UN, the IMF, the World Bank and the WTO. At every turn, Obama has endeavored to more fully integrate America into the "global community". Since he was elected, Obama has signed a whole host of new international economic agreements. He regularly speaks of the need for "cooperation" among global religions and he has hosted a wide variety of different religious celebrations at the White House. Obama once stated that "all nations must come together to build a stronger global regime". If you do not want to live in a "global regime" that is just too bad. To globalists such as Obama, it is inevitable that the United States of America will be merged into the emerging global system. Just this week, Obama has issued a new executive order that seeks to "harmonize" U.S. economic regulations with the rest of the world. This new executive order is yet another incremental step that is pushing us closer to a North American Union and a one world economic system. Unfortunately, most Americans have absolutely no idea what is happening.

The American people need to understand that Barack Obama is constantly looking for ways to integrate the United States more deeply with the rest of the world. The globalization of the world economy has accelerated under Obama, and this latest executive order represents a fundamental change in U.S. economic policy. Now federal regulators will be required to "harmonize" their work with the international community. The following is how this new executive order was assessed in a recent Businessweek article....

“Today’s executive order marks a paradigm shift for U.S. regulators by directing them to take the international implications of their work into account in a consistent and comprehensive way,” Sean Heather, vice president of the chamber’s Center for Global Regulatory Cooperation, said in an e-mailed statement.

Members of the Obama administration are touting this as a way to "reduce regulation", but the truth is that this is much more about aligning ourselves with the rest of the world than anything else.

Obama's "Information Czar", Cass Sunstein, authored a piece in the Wall Street Journal on Monday in which he stressed the need to eliminate "unnecessary regulatory differences across nations" so that the United States can compete more effectively in our "interdependent global economy". The end result of this process will be that we will now do things much more like how the rest of the world does things....

In an interdependent global economy, diverse regulations can cause trouble for companies doing business across national boundaries. Unnecessary differences in countries' regulatory requirements can cost money, compromising economic growth and job creation. Think of divergent requirements for car headlights, or the labeling of food, or standards for container sizes.

Recognizing this, President Obama's Jobs Council has called for U.S. agencies to better align U.S. regulations with those of our major trading partners. And today the president is issuing an executive order, "Promoting International Regulatory Cooperation," with a simple goal: to promote exports, growth, and job creation by eliminating unnecessary regulatory differences across nations.

The new Executive Order will build on work that is already underway. We have started close to home, with President Obama launching Regulatory Cooperation Councils with Prime Minister Harper of Canada and President Calderon of Mexico. The Councils are implementing work plans to eliminate or prevent the creation of unnecessary regulatory differences that adversely affect cross-border trade; to streamline regulatory requirements; and to promote greater certainty for the general public and businesses, particularly small- and medium-sized enterprises, in the regulation of food, pharmaceuticals, nanotechnology, and other areas. The United States and Canada released the United States-Canada Regulatory Cooperation Council (RCC) Joint Action Plan last December. In February, we announced the United States-Mexico High-Level Regulatory Cooperation Council (HLRCC) Work Plan.

Most Americans have absolutely no idea how far plans to integrate the United States, Canada and Mexico have advanced.

Last year, Barack Obama signed an agreement to create a "North American security perimeter" and most Americans never even heard about it because the mainstream news networks almost entirely ignored it.

But this is exactly what the globalists want. They don't want people to become alarmed by these moves toward North American integration. In fact, a document uncovered by Wikileaks shows that those involved in the effort to integrate North America believe that an "incremental" approach is best. Apparently they believe that small moves toward integration are less likely to alarm the general population. The following is from an article that appeared in The National Post last year....

The integration of North America’s economies would best be achieved through an “incremental” approach, according to a leaked U.S. diplomatic cable.

The cable, released through the WikiLeaks website and apparently written Jan. 28, 2005, discusses some of the obstacles surrounding the merger of the economies of Canada, the United States and Mexico in a fashion similar to the European Union.

“An incremental and pragmatic package of tasks for a new North American Initiative (NAI) will likely gain the most support among Canadian policymakers,” the document said. “The economic payoff of the prospective North American initiative … is available, but its size and timing are unpredictable, so it should not be oversold.”

If the people of Canada, the United States and Mexico were told that there was a plan to merge all three economies, there might be massive protests to stop it, and the globalists do not want that.

A few years ago, the "Security and Prosperity Partnership Of North America" (SPP) that was being promoted by President George W. Bush started to generate quite a bit of negative publicity. That caused those seeking to integrate the economies of North America to back off for a little while.

But as an article by Jerome Corsi last year detailed, the eventual goal is to turn North America into another version of the eurozone. That includes a common currency for North America called the "amero"....

The SPP in the administration of President George W. Bush appeared designed to replicate the steps taken in Europe over a 50-year period following the end of World War II to transform an economic agreement under the European Common Market into a full-fledged regional government, operating as the European Union, with its own currency, the euro, functioning as the sole legitimate currency in what has become known as “the eurozone.”

So will we ever see the "amero" replace the U.S. dollar?

If the globalists try to introduce the "amero", it would probably be after a horrible financial crisis in which the U.S. dollar falls apart. The "amero" would be heralded as the "solution" to the problems that were plaguing the dollar.

If there ever is a move to get rid of the U.S. dollar for an international currency of some kind, the American people will need to resist it with all of their might.

The more integrated the world becomes, the more likely it becomes that we will see nightmarish global tyranny someday. It is very frightening to think of what someone very evil might do if they had the chance to run the entire planet.

Once our national sovereignty is gone, it will be incredibly difficult to get back. If the American people don't take a stand while they still can, their children may wake up someday as citizens of a very oppressive "global regime". 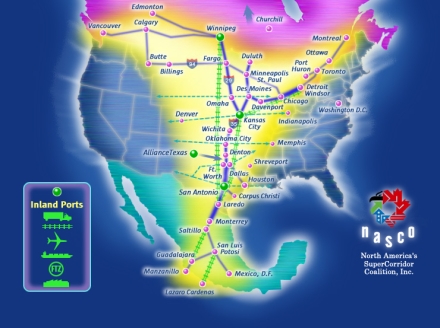