OUT OF MIND » THE INSANITY OF REALITY » POISON PLANET » GMO Foods and the Damage to Human Babies, Placentas & Umbilical Cords 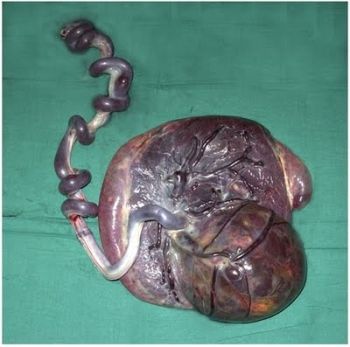 (JAKARTA) - I am writing from Indonesia, the country who got GMO soy first... to share what I am seeing, and ask if you too are seeing the same, and begin a dialog.... in 2008 Bumi Sehat Bali received 573 babies. We saw an increase in retained placentas. Also I am seeing an increase in velamentous cord insertion.

One would expect given the rate of malnourishment here - that the birthing women would use every bit of Qi to push out their babies (and we go so gently) - leaving little or not much Qi for releasing the placenta and involution. However, in 2008 and so far in 2009 we have seen many too many 'sticky' placentas, two even had to be transported (we do manual removal on site when absolutely necessary - but 2 really had to go in, one for a hysterectomy, in another - Dr. Weda gama nearly took her into surgery... but was able to remove the placenta (over 1 liter blood loss!). In the last 6 weeks of 2008 I had to go after 4 placentas!!! It was not pretty, and I do not take it lightly. (usually never more than 1 per year)

Also most shocking is the empirical experience ( I have no research to prove it) of seeing an increase of velamentous umbilical cord insertion and short cords.

Two weeks ago we had Padma, a vegetarian for 15 + years... third baby died the week before birth - from what was diagnosed as a cord accident. This 4th baby was born healthy... but the cord was flat and 4 to 5 cm wide (looked like a tape worm) and had five skinny vulnerable vessels arriving each separately to the placenta!!! The placenta was not the lovely placentas I know and love (I am doing a book on placentas - so I am having a love affair with them). There was no Wharton's jelly to speak of, and I am seeing a decrease in Wharton's jelly among all our babies.

Last week a young mom lost her baby in labor... suddenly FHT went from 150 to zero exactly 15 minutes between listening times... there was no dipping or drop in heart tones, but we were concerned as they had gone up to 160 and once above... but easily stabilized with position change of mother. We had no time to transport before infant demise.

Five hours later a lovely baby girl was born dead. There was no hope. This mom is very poor, husband no job. The cord was less than 30 cm long and had been pulled too hard as it was wrapped tightly around her foot.

Yesterday evening we had a 2nd time mom come in,very poor and malnourished. On arrival FHT were above 160, she was 9 cm, but nothing we did to try to stabilize baby worked... and when we got up to 188 and climbing (that is with O2 support! and hands and knees) we transported... stat cesarean, baby was very weak low apgars... but she has come around and my staff midwife has gotten her out of hospital nursery and onto breast. This baby would not have survived our normal hands-off gentle birth. Saved by O2, a doppler and cesarean - is this the kind of drama the placentas want now????

Cords are shorter. We don't cut them for a minimum of 3 hours at Bumi Sehat and many families choose lotus birth... so we hang out with the cords a long time. Last week our midwife Ayu had to cut a cord after birth of head, as the body would not follow, it was that short a nuchal cord... she had never had to do this before in her life as a midwife!

These are just a few stories... but we are seeing many less dramatic examples of shorter cords, velamentous cord insertion, diminished Wharton's jelly, and strange looking placentas.

This morning Dita having her second baby was stuck at 9 cm (with crazy transient but strong intermittent urge to push) from 7 pm to next morning at 8:30 she finally got complete.

After hands and knees with butt up, moxa Kidney 1 and pulsatilla to dis-engage baby from pelvis and then elephant walking stairs to bring him down right.... we had had strange bleeding in first stage, but baby remained strong and stabile, mom also was quite well through the long labor - but I was spooked to speed this up in any way... just wanted the cord to stretch gently. 20 minutes before the birth FHT were suddenly absent. Hands and knees, O2 and slowly slowly, he came back. Now Dita was really urging to get her baby out. He was most stabile when she squatted, but this was not our preffered gentle birth... Dita did it (we had not time to transport - I actually considered episiotomy - imagine, and had ready a quiwi to vacuum him out!!!)her son was born by her own power and all of our prayers to Allah. Allhumdullilah!! our 3.6 kilo Baby boy's cord was short, just about 40 cm. velamentous insertion... AGAIN. Yet another.

Last week we had a five babies in a 12 hour night... two had velamentous cord insertions! It's just not average anymore. In five days time I saw one fatal cord accident, another cord problem leading to stat cesarean birth, and today another incident of deep fetal distress due to cord problems. BTW - none of these three were nuchal cords, just short and velamentous.

What are you midwives seeing? please send this round to your friends... I am curious.


The study I read concerning M16 genetically modified corn showed that when fed to pregnant mice, ALL THE OFFSPRING, in one generation, had alterations of ALL the cells in ALL their organs!!! Can you see why I am worried about our precious placentas? I did not make this connection, until I began to see an increase in abnormalities and pathology due to placenta and cord troubles. The fact that so many Indonesian women depend upon genetically modified soy products ( tempe and tofu) for their day to day protein - and the early introduction of GMO soy here... well it got me wondering??

Dr, Hariyasa... Are you seeing an increase in this kind of cord and placenta problem at R.S. Sangla and Harapan Bunda? Some midwives at R.S. Ari Canti say they are seeing more problems. Dr. John... are you seeing more problems like this in Maui ? Iowa ? England ? Australia ? East Coast? I HOPE this is not a trend or a pattern. We really don't want GMO foods, or anything, i.e. environmental pollutants etc. to make changes in placentas. It would be shattering. As I see it we have Three combined potential ways in which the placentas are being affected in Indonesia ; Malnutrition, Pollution (including Roundup) and GMO soy. We can also add to that economic and emotional stress, which taxes pregnant women's vitamin and mineral stores, add to that increased cortisol, which Dr. Odent has proven impairs brain development in fetus. I hope I am wrong - that the placentas and umbilical cords are fine and that this is all coincidence. Please give me your input and any similar findings you are seeing. p.s. yesterday we received a lovely baby girl, the birth was gentle and beautiful, mom did not even have a tear. However, the cord was quite long, but had a 2 cm hematoma very close to the baby, this is yet another rare abnormality.

First published by Birth of a New Earth

Guest
GMO has caused so many troubles for humans & they just have no clue. This will be one of the things that will be addressed soon!

OUT OF MIND » THE INSANITY OF REALITY » POISON PLANET » GMO Foods and the Damage to Human Babies, Placentas & Umbilical Cords