The Satanic Temple Will Conduct ‘Reenactment’ of Satanic Black Mass at Harvard University Sun Jun 08, 2014 1:07 am

Vatic Note:  One of the biggest donors to Harvard, is Israel and the khazar banker internationalists.  This below is what I called "coming out of the closet".   They have begun the process of feeding us this a little at a time.  Notice the emphasis on the children and changing their perceptions of Lucifer/Satan and Christianity.

They call that "Gradualism", where you get fed a tiny bit at a time and then a little bit bigger bite and soon the whole thing is exposed.   I am surprised they have done this so fast and are actually using their favorite satanic institutions, such as Harvard,  to do so.   But here it is, so please read and decided for yourselves.

One of the images on the flyer announcing "this is Baphomet"; that we highlighted on here many times, showing our leaders such as Bush, Obama, and others giving the Baphomet hand sign which says "I love Satan".  We even captured the President of Iran giving the exact same hand sign in Iran.

Its impossible to know anymore, who the satanists really are.  So far we proved it is the leaders of the western world who are foreign occupied by israel, and its the Royalty of Europe.   We even showed the brothers who own the McDonald's franchises, as doing the "I love Satan" hand signs.   This is dark stuff, so keep that in mind as you read and ask for protection. This is clearly spiritual warfare.

The Satanic Temple Will Conduct ‘Reenactment’ of Satanic Black Mass at Harvard University
http://vigilantcitizen.com/latestnews/satanic-temple-satanic-blass-mass-harvard-university/
by Vigilant Citizen, May 9th, 2014

Harvard University – one of America’s most elite institutions – will host the reenactment of a Satanic Black Mass on May 12th. The event will be conducted by the Satanic Temple whose representatives will provide narration on the academic and historical aspects of a Satanic Mass. 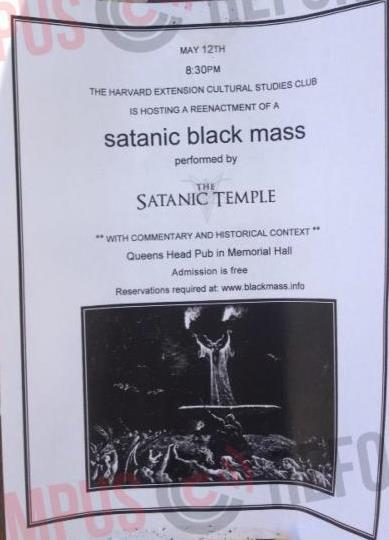 Flyer advertising the Black Mass. The image is of Baphomet standing on an altar surrounded by damned souls.
Black Masses are defined as a “magical ceremony and inversion or parody of the Catholic Mass that was indulged in ostensibly for the purpose of mocking God and worshiping the devil; a rite that was said to involve human sacrifice as well as obscenity and blasphemy of horrific proportions.”

“First and foremost amongst the manifestations of what had become Devil worship we find the Black Mass or Devil Masses of the Middle Ages, from which the ceremonial and ritual of Black Magic are derived. The principle which forms the very essence of the Devil, the idea of opposition, also underlies the whole ceremonial and ritual of Black Magic and Black Masses.

Such ideas as repeating prayers backwards, reversing the cross, consecrating obscene or filthy objects, are typical of this sense of opposition or desecration. The key-word to the whole of the practices of Black Magic is desecration.”
- C. W. Olliver, An Analysis of Magic and Witchcraft

“Animal masks seem to have been a popular form of disguise adopted by the witches and wizards attending meetings, and this custom is probably responsible for many of the stories of witch lycanthropy.

Among other obscene and phallic witch-rites was the Black Mass, celebrated by a renegade priest upon the naked body of the adept for whose benefit it was performed. It symbolized the perversion of all the rites of the Catholic church.

Black candles instead of white, inverted crosses, chalices containing the blood of new-born infants sacrificed for ritual purposes, urine for holy water, all these were part of the paraphernalia needed, according to historians, to propitiate the Prince of Darkness and his retinue of minor Devils.

Besides evocations, casting of spells and sexorgies, devil worship entailed such inanities as desecration of the hosts stolen from catholic churches and the kissing of the Grand Master (devil) on the tail or membrum virile.”
- Lady Queenborough, Occult Theocracy

The “reenactment” presented at Harvard will however be a “PR-friendly” version of a Black Mass and will probably be presented as a “theatrical response to the Church’s oppression”. This is the classic angle to make these practices “hip” and socially acceptable.

The Mass will take place at The Queen’s Head Pub, in Memorial Hall, which is at “the heart of Harvard’s campus”. The Hall was “dedicated in 1878 as a monument to Harvard alumni who died during the Civil War” … odd place to conduct a Black Mass.

As I noted in this article, the Satanic Temple is also hard at work to get a statue of Baphomet placed at the Oklahoma State Capitol (or any other high-profile location to get publicity). Here’s what the statue will look like. 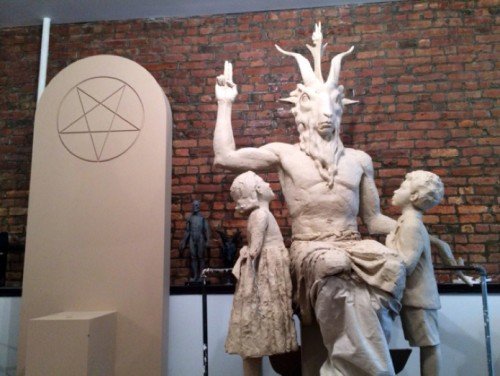 Although the Satanic Temple claims that “it does not believe in the supernatural”, its statue features Baphomet doing the hermetic hand sign “as above so below”. It will site in front of an inverted pentagram, the symbol of black magick. 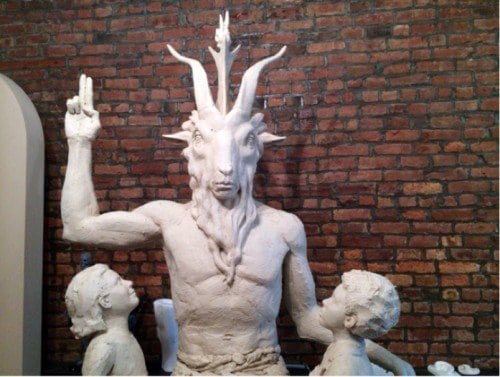 The goal of the Satanic Temple: Luring children into looking up to Baphomet (and everything it represents) by claiming that it’s merely a “harmless poke at Christianity”.


The article is reproduced in accordance with Section 107 of title 17 of the Copyright Law of the United States relating to fair-use and is for the purposes of criticism, comment, news reporting, teaching, scholarship, and research.