Admin
Posts : 107601
Join date : 2012-01-04
Location : Woodstock Nation
Another remarkable crop picture appears near Boskovic, Czech Republic on June 28, 2014: two different Morse codes for “3.14” (pi) or “Theseas” (of labyrinth fame) may be read near its centre, while outside we can see a “compass rose” with two sectors empty and two filled
On June 28, 2014, another remarkable crop picture appeared near Boskovic in the Czech Republic. Right away we were able to find a clever Morse code near its centre for the numbers “3.14” or “pi”: 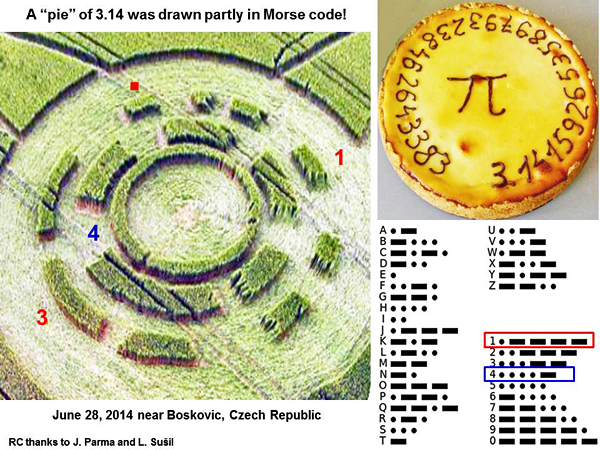 This particular code may be read “out-to-in” along two separate rings as:
ooo   o   o - - - -  /  oooo -  =  3 (point) 1 (Morse) / 4 (Morse) = 3.14
Most “rectangles” of standing crop near the centre show a small region of pink-brown colour on the left, in their local frame of reference when going out from the centre. Such detailed features suggest that the primary sense of reading may be clockwise as just suggested above.
When we study the entire crop picture from a broad aerial perspective, we can see that it has a “pie” shape to match the three numbers of “pi” = 3.14 which were coded near its centre: 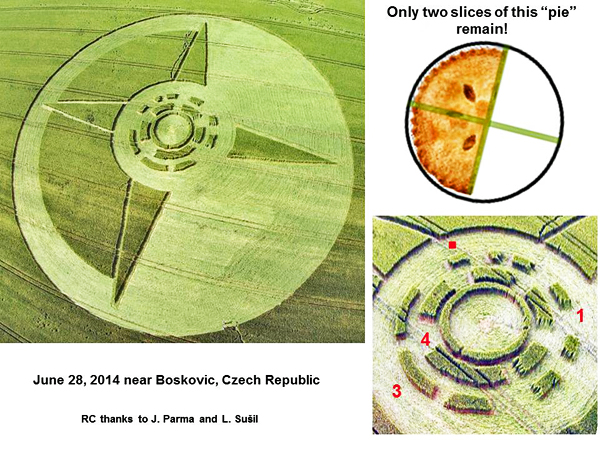 Ha, ha, the crop artist is having a bit of a joke! Only two slices of this “pie” remain by June 28. Out of four sectors in total, two are empty, while just two remain filled.
Might this imply something important about June 30 two days later? We can see two large “numbers in the landscape”, somewhat to the southwest of this crop picture (using Google Earth), which resemble “30”.
We can also count 14 “rectangles” of standing crop near the centre, which were drawn along two rings of 9 or 5. The Mayan calendar date for June 30, 2014 will be 0.0.1.9.14, which is a possible match since (9 + 5) = 14.
Now the overall shape of this new crop picture also resembles a “compass rose”: 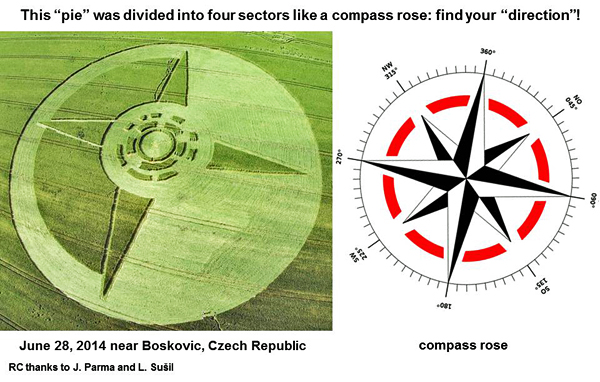 Two “filled” parts of the compass rose point approximately west as shown in the slide above, while its two “empty” parts point approximately east.
Upon careful study, we could also find a second message in Morse code near the centre, which seems to read “THESEAS” (of labyrinth and minotaur fame): 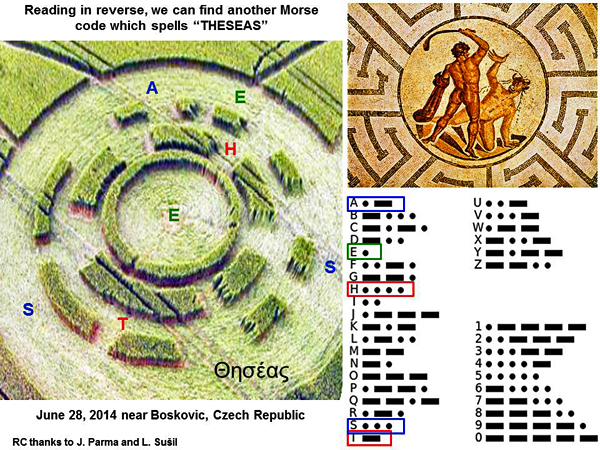 Here we read another Morse code “in reverse” as in-to-out along two separate rings:
-  oooo  / central o  /  ooo   o   o -   ooo = T H / E / S E A S = THESEAS
Usually we call the legendary hero “Theseus” in English, but his name in modern Greek is “Theseas”.
Certain regions of standing crop near the centre show serrated, teeth-like regions on the right, in their local frame of reference when going out from the centre. Such details suggest there may be an additional sense of reading as anti-clockwise (shown in the slide above).
One might also be able to read the outer ring in Morse as ooo  - - -  ooo = S.O.S. (thanks to Luis Delgado Salez).
Why should the new crop picture near Boskovic show a second Morse code for “Theseas”? There have been a whole series of “labyrinth related” crop pictures during June of 2014: for example on June 1 at Hod Hill, on June 8 in Serbia, on June 12 in France, on June 17 near Badbury (if we count its “rings”), and on June 26 near Ridgeway (if we count its nearby landscape features).
When we study the landscape close to this new crop picture at Boskovic, we can see what might be a “slain minotaur” just to the left, and a “quetzal bird” above to the right: 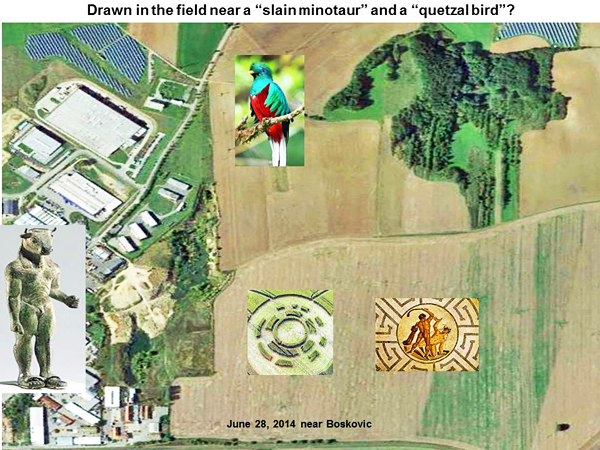 The new crop picture near its centre does seem to resemble classical images of “Theseus in the Labyrinth”, one example of which has been shown in the slide above.
Ground photos of this crop picture, taken by Jaroslav Parma and L. Sušil, show thin lines of standing plants close to crop tramlines. Such details suggest that the plants were flattened by an unknown energy which does not conduct well across empty spaces, rather than flattened everywhere by rope and boards (see www.boskovice.cz/obrazec-v-obili.info?id=9519). This is a useful criterion suggested by Paul Jacobs.
Five sets of “two ovals” appear close in the landscape to this new crop picture (around telephone poles). Those field features are not shown here, but may be seen easily in aerial photographs posted on other pages. Might they imply “two filled sectors of a compass rose”, or “two days”, or even that the “landscape bird” shown above is “hopping  along”?
One also gets the impression, from an aerial view of this crop picture, that some large UFO might be “flying west”? Its “compass rose” shape resembles a four-armed UFO which was drawn “flying” on top of Milk Hill on August 1, 2013.
If the crop artist draws a Morse code for “pi” = 3.14 within the larger image of a “fruit pie”, then we can be sure that he intends a certain level of humour! Any further developments towards a deeper understanding of this crop picture will be reported soon.
Red Collie (Dr. Horace R. Drew)
P.S. Many thanks to Jaroslav Parma and L. Sušil for excellent field research and photography.