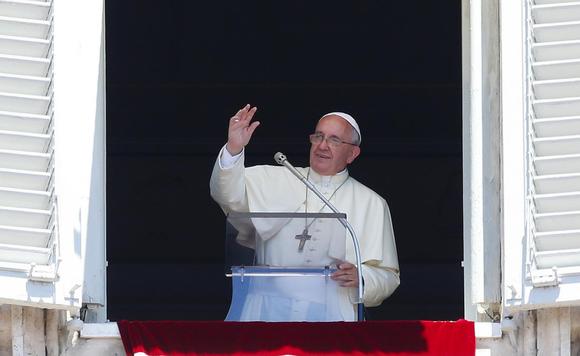 (Reuters) - Pope Francis told victims of sexual abuse by Roman Catholic clerics the Church should "weep and make reparation" for crimes he said had taken on the dimensions of a sacrilegious cult.

"For some time now I have felt in my heart deep pain and suffering," he said in his strongest comments yet on the crimes, delivered in the homily of a Mass with adult victims on Monday. "So much time hidden, camouflaged with a complicity that cannot be explained until someone realized that Jesus was looking."

He said he would not tolerate abuse by clerics, which has been exposed in recent years in many European, American and Asian dioceses. Bishops would be held accountable if they shielded them.

Critics of the church's long failure to act on the cases, and of the pope's failure to meet victims earlier in his 16-month-old pontificate, said he must quickly follow up with clear action to prove the Mass was not just a ceremonial event.

Francis delivered his homily to six victims of abuse, two each from Ireland, Britain and Germany, before meeting all individually at a gathering that lasted nearly four hours, spending about 30 minutes with each one.

"I ask for the grace to weep, the grace for the Church to weep and make reparation for her sons and daughters who betrayed their mission, who abused innocent persons," he said, according to a Vatican transcript.

"Before God and his people I express my sorrow for the sins and grave crimes of clerical sexual abuse committed against you. And I humbly ask forgiveness," he said.

Sexual abuse scandals have haunted the Catholic Church for over two decades but became a major issue in the United States about 10 years ago. Since then they have cast a shadow over local churches in Ireland, Germany, Belgium, the Netherlands and other countries and badly tarnished the Church's image.

The meeting was closed to media but the Vatican spokesman, who participated, said it was "very intense and moving".

"It was clearly not a public relations event. It was a very profound, spiritual encounter with a pastor, a father, who is trying to understand deeply what happened," Father Federico Lombardi said.

The Vatican did not release the names and ages of the victims but they were believed to be in their 30s and 40s. One victim, Marie Kane, 43, of Ireland, told the Irish Times that she told the pope that "cover-up is still happening and you have the power to make these changes".

The paper said she asked the pope to remove Cardinal Sean Brady because of his handling of an Irish abuse inquiry in 1975.

Victims groups have been pressing the Vatican to hold bishops accountable if they covered up crimes. The pope addressed this directly, repeating the thrust of what he said last April in a conversation with reporters.

BISHOPS TO BE HELD ACCOUNTABLE

"There is no place in the Church's ministry for those who commit these abuses, and I commit myself not to tolerate harm done to a minor by any individual, whether a cleric or not," he said. "All bishops must carry out their pastoral ministry with the utmost care in order to help foster the protection of minors, and they will be held accountable."

Anne Barrett Doyle of BishopAccountability.org, a U.S.-based documentation center on abuse in the Catholic Church, said the meeting was "positive and necessary," even if overdue.

"Now Pope Francis must internalize and personalize his point about Church leaders 'who did not respond adequately to reports of abuse'," she said in a statement.

She called on the pope to "follow through on his promise today to discipline the many more bishops and religious superiors who even recently have enabled child sexual abuse through their negligence or deliberate cover-up".

The U.S.-based Survivors Network of those Abused by Priests (SNAP), said: "Francis must take decisive action right now, action to expose and remove clerics who commit and conceal heinous crimes against the most vulnerable."

The pope told the victims he realized that they and others had suffered "often unrelenting emotional and spiritual pain, and even despair" and that some had turned to drugs or even taken their own lives.

"The deaths of these so beloved children of God weigh upon the heart and my conscience and that of the whole Church," he said.

Francis came under fire from victims groups for saying in an interview this year that the Church had done more than any other organisation to root out pedophiles in its ranks.

Victims groups have said the pope had a spotty record of dealing with abuse cases in Argentina when he was archbishop of Buenos Aires, and victims from that country sent him a letter expressing "pain" that they were not invited.

The Vatican says 3,420 credible accusations of sexual abuse by priests had been referred to the Vatican in the past 10 years and 824 clerics defrocked. The Church in the United States has paid $2.5 billion in compensation to victims.

» Pope asks forgiveness for ‘evil’ of child abuse by priests
» The Roman Church, the Pope, the Clergy and the Roman Satanic Cult
» Church of England Admits it ‘Colluded’ to Cover-Up Decades of Child Abuse
» The Catholic Church & The Abuse Of Ireland
» Pope Criminalizes Vatican Leaks of Child Prostitution and Sexual Abuse*