MessageToEagle.com - Is it an ancient map, symbolic portals of reincarnation, astronomical constellations, or ceremonial markers for sacrifice?

Is the stone perhaps a representation of something entirely unknown?

Ever since the 5,000-year-old mysterious Cochno stone was discovered, scientists have been scratching their heads trying to figure out its true meaning. Today, they are not closer to solving this ancient mystery.

As we described in MessageToEagle's article, there are many beautiful cup-marks in Scotland. These very ancient carvings are the key to ancient art of our ancestors.

These strange marks have puzzled both researchers and layman alike for more than a century.

The Cochno stone which measures 42ft by 26ft was discovered by the Reverend James Harvey in 1887 in Scotland.

Cochno is the name of a historic estate where the noble Hamilton family had their seat. Today, the estate, and with it Cochno House is owned by Glasgow University's School of Veterinary medicine.

The stone lies off the Cochno Road near Clydebank's Faifley housing estate on land half owned privately and half by West Dunbartonshire Council. 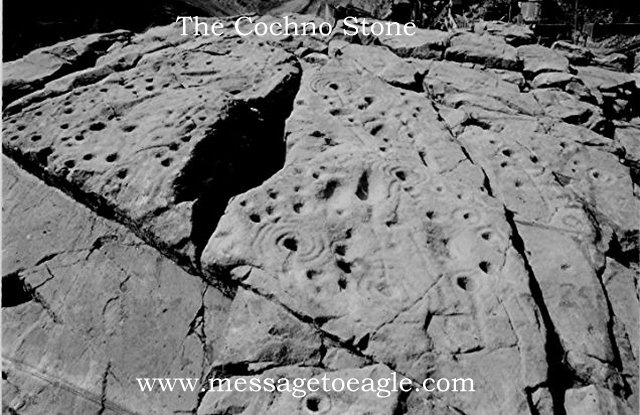 It is an incredible array of ancient art, also sometimes known as the Druid Stone.

The stone is covered in about 90 carved indentations, or "cups", and grooved spirals, along with a ringed cross and a pair of four-toed feet.

It is widely recognized as "one of Scotland finest collections of petroglyphs". The problem is that no-one understand the meaning of these petroglyphs or the stone's purpose.

History researcher Alexander McCallum says there are several interpretations for the carvings.


He said it was also possible the stone had been used in sacrificial ceremonials, with milk or water poured into the grooves and channels as offerings, or that the markings were astronomical maps, showing constellations that guided prehistoric farmers' crop sewing. 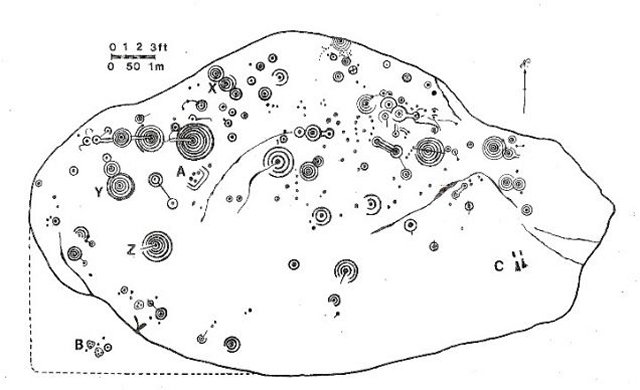 Drawing of the patterns in the Cochno Stone.
Mr McCallum said similar carvings had been found around the world, including in Hawaii, India and Africa, while in Scotland they tended to be found along the west coast near the sea or rivers, often close to copper mines.

In 1964, archaeologists suggested the Cochno Stone should be buried under several feet of soil to protect the carvings from further damage by vandals. The stone has been covered ever since.

Now, after being hidden for 50 years, the Cochno Stone is uncovered again. This has sparked a lot of debate whether it is the right thing to do. According to Scotsman A spokeswoman for West Dunbartonshire Council said it would "seek professional advice on the implications of uncovering the area", adding: "Our priority is to ensure this renowned site is preserved and protected in a sustainable way."

A spokeswoman for Historic Scotland said it too would be "happy to support any considered and adequately resourced proposals to uncover it, in conjunction with the local authority and the landowner". 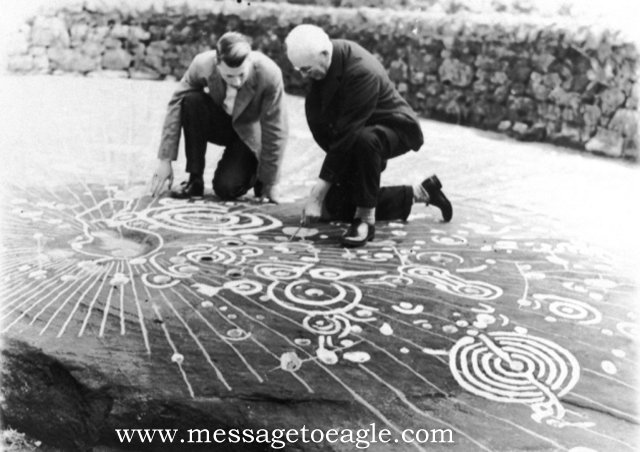 "In the 50 years since it was covered over, there have been significant advances in recording techniques and our understanding of conservation, and we would be happy to support any considered and adequately resourced proposals to uncover it, in conjunction with the local authority and the landowner."

Meanwhile, the nation said: "Well, get on with it." It seems beyond absurd that these ancient carvings were buried under the soil and forgotten about. It's like a kind of reverse archaeology. They're the carvings that time, or somebody, forgot. As to what they mean, examine the evidence and let your imagination roam free. Theories advanced hitherto include a map of Clyde Valley settlements, symbolic portals of reincarnation, astronomical constellations, and ceremonial markers for sacrifice.

If only the Cochno Stone could speak. It would probably say: "Please do not cover me in soil." According to Mr McCallum, meanwhile, similar carvings can be found in Hawaii, India and Africa, which hints at a mind-boggling coincidence of cultural expression.

Hopefully, the precious Cochno Stone will not be damaged and perhaps on day in the future we will find out its true purpose. If not, it will still remain one of Scotland's most beautiful and intriguing collections of petroglyphs.