OUT OF MIND » PERCEPTUAL AWARENESS ~ WELCOME TO WOOVILLE » THE SHIFT IN CONSCIOUSNESS » Raptitude: The elegant art of not giving a shit

Raptitude: The elegant art of not giving a shit Raptitude: The elegant art of not giving a shit
by David

During a very famous moment, Krishnamurti asked the audience if they wanted to know his secret. The lecture hall went silent, and everyone leaned forward.
“You see,” he said, “I don’t give a shit.”
I’m paraphrasing. By most accounts he said “You see, I don’t mind what happens,” but he could have easily said either, and not giving a shit is a concept more people can identify with. I apologize for the vulgarity of the phrase — I will use it a lot in this article — but nothing else captures this piece of wisdom quite as well.
When you tell people to “not mind what happens,” they’ll probably look at you funny unless they’re the type of person who would be in the audience at a Krishnamurti lecture. But everyone understands that there are times in life when the best way to respond to an unpleasant event is to not give a shit.
Giving a shit really just amounts to thinking about what happened. If someone was rude to you on the phone, and you think a lot about it, you are giving a shit. If you hang up and shrug and then go for a bike ride, then you are successfully not giving a shit.
Giving a shit does not necessarily mean you’re doing anything useful, but it makes it seem like you are. It feels like there’s some kind of justice that you’re getting closer to with every moment you give a shit. But that’s not true, because giving a shit, by itself, is only thinking — and thinking has little use aside from figuring out what to do.

This illuminates one of our most stubborn, silly beliefs about human thinking: that most of it is worthwhile, that it’s actually getting you somewhere. Most thoughts just fill up your head and distance you from the life that’s still unfolding in front of you. They’re not leading to any important decisions or insights, they’re just taking over your present moment, and possibly shortening your life on the other end too.
We often believe that our thoughts are accomplishing something just because they’re emotionally charged, or because they’re “about” something we consider important, like fairness, respect, or the state of society.
No. They are useful only insofar as they get you to move your body and do something useful.
This isn’t to say that action is always necessary when it comes to responding to life’s countless little annoyances, rudenesses, and unfairnesses. In fact, usually it isn’t. Often there’s nothing you can do, or nothing you’re willing to do. That’s fine. In those cases, which I think represent the vast majority of cases, you’re better off not giving a shit.
Not giving a shit sounds like apathy, but it’s not. It’s simply a refusal to waste your energy and time on thoughts you’re not going to act on. So when you do give a shit, make sure that the point of this shit-giving is to figure out what you’re actually going to do in response to what happened, and then move on to the action part.
Here is a handy flow-chart: 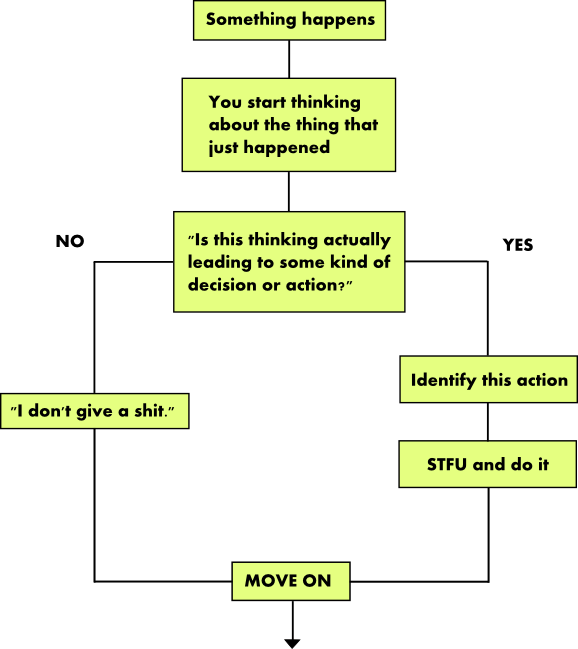 It can be hard to not give a shit. It’s something you have to practice. It should be a celebrated life skill that we teach children, alongside math, shoe-tying and talking to strangers.
The other day I was out running and someone yelled at me from a passing pickup truck. I think he called me a pansy (or maybe a Nancy?) It startled me, and I might have even jumped a bit. They probably laughed or high-fived each other or whatever those kinds of douchebags do after a successful drive-by shouting.
There have been times in my life when I would have spent quite a bit of energy giving a shit about a minor injustice like this. But I felt pretty unstoppable that day, and it didn’t do much to me. I still felt the initial surge of adrenaline and anger, but decided that I would let this 5-second event just go on by, instead of investing in an afternoon-long internal protest, which I would probably feel a need to tell everyone about later.
I kept running, and noticed that only seconds later the street was quiet and peaceful again. There was absolutely no trace of what happened, because I didn’t keep it alive in my head by giving a shit.
I have known people who will tell stories, repeatedly, about some unpleasant twenty-second interaction that happened to them years ago, and which they evidently never stopped giving a shit about. I’m sure you have witnessed this too. Don’t fall for this madness. As a general policy, don’t give a shit.
Knowing how to not give a shit doesn’t mean you never give a shit about anything. It just means that when you give a shit, it’s voluntary. You have a reason.
The key to not giving a shit is knowing what the rising temptation to give a shit feels like. It always starts with angry or indignant words in your head, often in the form of a clever comeback or an internal sermon about respect and decency.
You may start playing out different scenarios in your head where you show the offender who’s boss in some way. Maybe you slip into a revenge fantasy where (for example) you run after the vehicle like the T-1000, and they end up driving into a tree, and you stand there and laugh with your hands on your hips.
When you notice these kinds of thoughts arising, remind yourself that you don’t give a shit about things like this, and invest your attention into the physical world again. What’s the next event in your life, now that you’ve moved on from the tiny, unfortunate event that just happened? Pay attention to what your body needs to do next, in order to move on to this next thing.
Then pull the trigger. Dial that next call, run that next mile, mix those drinks, hop on that bike… whatever logically comes next in the life of a person who doesn’t give a shit about petty things. If you’re itching to give a shit, give a shit about that.

***
Cat photo by lovecatz / Flow chart by David Cain
Learn to live in the present
Everyday mindfulness has transformed my life, and has for countless others. You can use it to reduce stress, deal calmly with trouble, and experience joy and peace throughout each day. Making it a habit is easier than you probably think. Learn how.
If you liked this post, get Raptitude sent to you. (It’s free.)

C'mon just spit it out don't mess around ;-)

OUT OF MIND » PERCEPTUAL AWARENESS ~ WELCOME TO WOOVILLE » THE SHIFT IN CONSCIOUSNESS » Raptitude: The elegant art of not giving a shit