★Cosmic Conspiracy ★Majestic 12★For 20 years, this book has been sold “under the counter” in America★★ 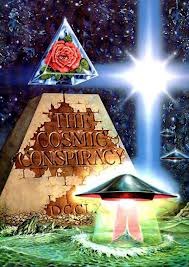 Stan Deyo's life story reads like a sci-fi thriller — except that readers might find the plot too “out there” even for fiction.

He’s also a computer programmer in seven languages, the author of two books and five scientific papers, a university lecturer in 3D computer animation and graphic art, and an amateur archeologist in the Middle East where he believes he’s found the location of the Garden of Eden.

Cosmic Conspiracy talks about the "Gray Project" from the original "Majestic 12" group and discusses the group which just recently took the power away from them. It uses many new photos and images to explain what is about to happen to the people of Earth with special emphasis on the use of HUGE craft over our major cities.

For 20 years, this book has been sold "under the counter" in America.

The official resistance to the ideas and facts in this book was huge. Now, with the Internet, we are able to circumvent the normal controls on the release of this sort of information to the American people. In Australia (where the ex-patriot, Texan author lives) this book sold the equivalent of a "million-seller" in America. TV shows, documentaries and investigations have been launched as a result of this book which is now read in over 22 countries.

It discusses the 'conspiracy' behind the US Government, the United Nations, The United States of Europe, The coming Arab Confederation and the Club of Rome to establish a new, global, political power to dominate the peoples of Earth. ★Alchemy and The Knights Templar★

Top Hacker and Inventor Shows Us How It's Done - at TED X - How Your Hotel TV Can Spy on YOU....So Can Your Alarm Clock - So can Electric Switches (ck out videos) HD Pen Spycam Review

» The Amount Of Stuff Being Bought, Sold And Shipped Around The U.S. Hits The Lowest Level In 6 Years
» Attorney Brent Wisner Tells RFK, Jr.: Drugmakers Knew Zantac Caused Cancer But Sold It Anyway for 40 Years
» Project Blue Book ended 50 years ago today
» Project Grudge, Project Blue Book, UFO Conspiracy
» The Book Of Enoch - Fallen Angels & Demons - Why Was This Suppressed From The Bible for 2000 Years?