OUT OF MIND » CHANGING ENVIRONMENT & NATURE » EARTH CHANGES » Millions of Sea Creatures are Dying Off the Pacific Coast. Why?

Millions of Sea Creatures are Dying Off the Pacific Coast. Why? 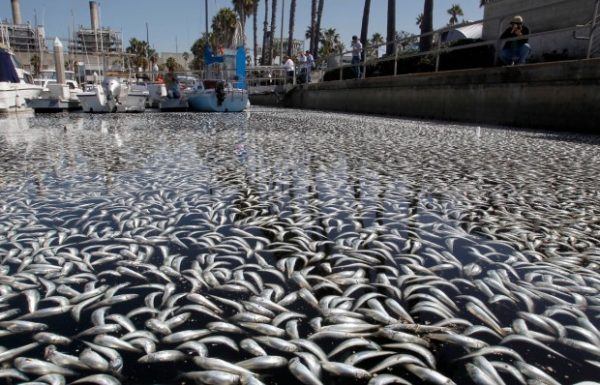 Never before have we seen so much death along the west coast of North America.  Massive numbers of sea stars, bluefin tuna, sardines, anchovies, herring, oysters, salmon, marine mammals and marine birds are dying, and experts are puzzled.  We are being told that we could even see “local extinctions” of some of these sea creatures.  So are all of these deaths related?  If so, what in the world could be causing this to happen?  What has changed so dramatically that it would cause massive numbers of sea creatures to die along the west coast?

The following are 15 examples of this phenomenon.  Most scientists do not believe that these incidents are related.  But when you put them all together, it paints quite a disturbing picture…
#1 A “mystery plague” is turning sea stars all along the west coast of the United States and Canada into piles of goo…

Sea stars, commonly referred to as starfish, have been dying off in alarming numbers along the entire West Coast, from Baja, Mexico, to Alaska. According to reports from the Seattle Aquarium, some parts of Puget Sound and the San Juan Islands have seen population declines of up to 80 percent.
On the Oregon coast, according to CoastWatch Volunteer Coordinator Fawn Custer, “Last December, we had less than 1 percent of sea star wasting. By May 1, more than 5 percent of sea stars were affected. Now, I would say, in some areas, it is up to 90 percent.”

A marine epidemiologist at Cornell University says that this is “the largest mortality event for marine diseases we’ve seen“.
#2 The population of bluefin tuna in the Pacific Ocean has declined by 95 percent.  Mexico has already banned fishing for bluefin tuna for the rest of the year, and the U.S. government is considering doing the same thing.
#3 Sardine, anchovy and herring populations have dropped dramatically along the west coast in recent years…

Pacific sardine populations have shown an alarming decline in recent years, and some evidence suggests anchovy and herring populations may be dropping as well.
The declines could push fishermen toward other currently unmanaged “forage fish,” such as saury, smelt and sand lance, stealing a critical food source relied on by salmon and other economically important predators.
In response, the Pacific Fishery Management Council is considering an ecosystem-based management approach that recognizes the fundamental role of forage fish in the Pacific marine food web. Tiny, but abundant, these small schooling fish feed on plankton and, in turn, fill the bellies of Oregon’s iconic marine species, including salmon, sharks, whales, sea lions and sea birds.

#4 “Record numbers of distressed sea lions have washed ashore in California” for the second year in a row.  One news report described these distressed sea lions as “malnourished and dehydrated, too weak to find food on their own“.
#5 Marine birds are “disappearing” in the Pacific northwest…

From white-winged scoters and surf scoters to long-tailed ducks, murres, loons and some seagulls, the number of everyday marine birds here has plummeted dramatically in recent decades.
Scoters are down more than 75 percent from what they were in the late 1970s. Murres have dropped even more. Western grebes have mostly vanished, falling from several hundred thousand birds to about 20,000.

#6 Those that work in the seafood industry on the west coast are noticing some very “unusual” mutations.  For example, a red king crab that was recently caught in Alaska was colored bright blue.
#7 Pelicans along the California coastline are “refusing to mate“.  This is being blamed on a lack of fish for the pelicans to eat.  As a result, we are seeing less than one percent of the usual number of baby pelicans.
#8 The oyster population in the Pacific is falling so fast that it is being called “the great American oyster collapse“.
#9 The population of sockeye salmon along the coast of Alaska is at a “historic low“.
#10 Something is causing herring off the coast of British Columbia to bleed from their gills, bellies and eyeballs.
#11 Scientists have discovered very high levels of cesium-137 in plankton living in the waters of the Pacific Ocean between Hawaii and the west coast.
#12 Back in May, more than six tons of anchovies died in Marina Del Ray over a single weekend.
#13 Just a few days ago, thousands of dead fish were found on Capitola Beach.  Authorities are trying to figure out what caused this.
#14 Earlier this month, thousands of dead fish were found on Manresa Beach.
#15 According to a study conducted by researchers at Oregon State University, radiation levels in tuna caught off the coast of Oregon approximately tripled in the aftermath of the Fukushima nuclear disaster.
Could it be possible that at least some of these deaths are related to what has been happening at Fukushima?
We do know that fish caught just off the shore from Fukushima have been tested to have radioactive cesium that is up to 124 times above the level that is considered to be safe.
And we also know that a study conducted at the University of South Wales concluded that the main radioactive plume of water from Fukushima would reach our shores at some point during 2014.
Is it so unreasonable to think that the greatest nuclear disaster in human history could have something to do with the death of all of these sea creatures?
Just consider what one very experienced Australian boat captain discovered when he crossed the Pacific last year.  According to him, it felt as though “the ocean itself was dead“…

The next leg of the long voyage was from Osaka to San Francisco and for most of that trip the desolation was tinged with nauseous horror and a degree of fear.
“After we left Japan, it felt as if the ocean itself was dead,” Macfadyen said.
“We hardly saw any living things. We saw one whale, sort of rolling helplessly on the surface with what looked like a big tumour on its head. It was pretty sickening.
“I’ve done a lot of miles on the ocean in my life and I’m used to seeing turtles, dolphins, sharks and big flurries of feeding birds. But this time, for 3000 nautical miles there was nothing alive to be seen.”
In place of the missing life was garbage in astounding volumes.
“Part of it was the aftermath of the tsunami that hit Japan a couple of years ago. The wave came in over the land, picked up an unbelievable load of stuff and carried it out to sea. And it’s still out there, everywhere you look.”

What do you think?
Is Fukushima to blame, or do you think that something else is causing massive numbers of sea creatures to die?
Please feel free to share what you think by posting a comment below…
Michael Snyder is the Editor of the End of the American Dream blog.
Don't forget to follow the D.C. Clothesline on Facebook and Twitter. PLEASE help spread the word by sharing our articles on your favorite social networks.
Share this:

OUT OF MIND » CHANGING ENVIRONMENT & NATURE » EARTH CHANGES » Millions of Sea Creatures are Dying Off the Pacific Coast. Why?