CROP CIRCLE UPDATE : Circle with a Dot or Circumpunct 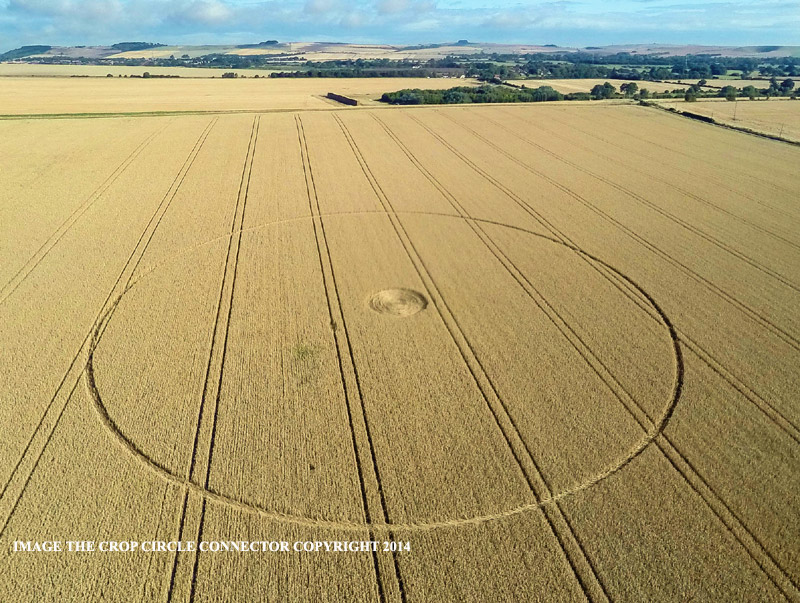 .
Mixon, nr Etchilhampton,
Wiltshire, United Kingdom.
Reported 12th August
.
Most symbolic of all symbols
.
The circumpunct is also the alchemical symbol for gold.
The circle,”represents the all encompassing power and infinite limitlessness of God. While the dot,” Represents our place within God, we are part of God. The circumpunct represents the perfect union of the divine and the created. The dot can represent anything within the omnipotent divinity of God.”Or it can also represent the self. The circle can mean the body, or the conscious self, while the dot can represent our subconscious or super-conscious.”
Cathedrals were erected – we build the “House Not Made With Hands.”  The point within a circle was Operative – ours is Speculative!  But through the two – point in a circle on the ground by which an Operative secretly tested the square of his fellows – point within a circle as a symbol by which each of us may test, secretly, the square of his virtue by which he erects an Inner Temple to the Most High –  both are beautiful.
It was  believed in India that at the general deluge everything was involved in the common destruction except the male and female principles or organs of generation, which were destined to produce a new race and to repeople the earth when the waters had subsided from its surface.
The female principle, symbolized by the moon, assumed the form of a lunette, or crescent, while the male principle, symbolized by the sun, assumed the form of the lingam (or phallus) and placed himself erect in the center of the lunette, like the mast of a ship.  The two principles in this united form floated on the surface of the waters during the period of their prevalence on the earth, and thus became the progenitors of a new race of HU-men.