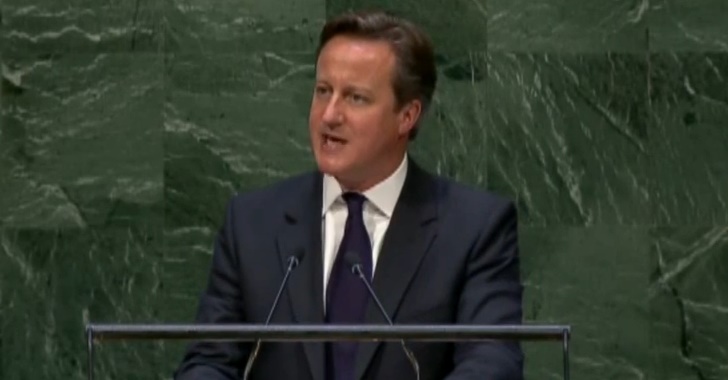 David Cameron recently delivered a massive dose of propaganda to the people of the UK and the world, perpetuating a philosophy of violence against peaceful people and relentless aggression.
In a recent speech addressed to the UN, he said “non violent extremism” is as dangerous as violent terrorism, and must be eradicated using every weapon at any government’s disposal.
This is synonymous with a declaration of war upon activists.
This could be considered a declaration of war upon anyone representing ideas that are inherently against the philosophy of government, power structures, centralized power and currency. This should make you sick to your stomach.
This representative of death and wars of aggression even went as far as to reference 9/11 truthers. He basically said he wishes to  ‘eradicate’ 9/11 truthers, while acknowledging that these tactics would clearly be in violation of freedom of speech. That includes the family members of actual victims of 9/11, who want a real investigation. That includes so many good, honest, hard working  people. That number includes over 2,000 architects and engineers that want an independent investigation into 9/11.
I truly cannot think of a more disgusting, aggressive, thuggish, socio-psychopathic thing for a figure like David Cameron to say.
We’ve posted the clip in question below:

Please share this with beyond absolutely as many people as possible; this is very nearly a declaration of war upon freedom of speech.

This must be a hoax

This arse is a third rate blair who cant get warmongering right, he is watching his MP's defect to a party he called swivel eyed loons, and presiding over the death of what used to be the conservative party.

As this arse has got the drones in Parliament to bomb Iraq....again

I agree with it, as long as they bomb the middle of nowhere with an MP who voted for it strapped to each bloody bomb...