Monsanto Poised To Take Over the Weed Industry 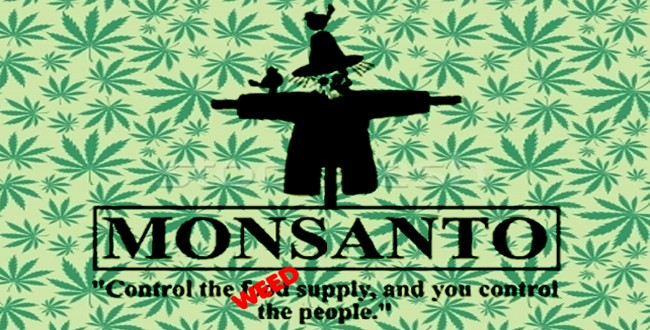 Monsanto Poised To Take Over the Weed Industry

Earlier in August, my great home state of Illinois joined the party and legalized medical marijuana, becoming the 20th state in the nation to do so. With most of the rest of the thirty straggling states now trying to push forward some kind of legislation, and with Washington and Colorado both taking the unprecedented step to outright legalize it, and with CNN’s Dr. Sanjay Gupta officially climbing on board the Green Express by saying that he believes it has legitimate medicinal properties, the nationwide legalization of marijuana is less of a hope and more of an inevitability. At some near point in the future, most likely one that takes place in our own lifetimes, the use of marijuana will be as prevalent as cigarettes, alcohol, and aspirin.
And, as anyone who’s ever stepped foot in a bar or liquor store or hospital knows, that means big corporations jockeying for your money.
Story Continues Below
Support KCET
As this report from CNBC makes clear, there’s tons of money in pot. It’s the so-called “largest cash crop in California” for a reason: the cultivation of marijuana plants in Mendocino County alone is theorized to reach roughly $1.5 billion a year. Seeing as no one has a perfect understanding of just how many plants are being grown up there, that estimate may actually be low. And with that much money hanging around, corporate interests are sure to follow.
What the CNBC report surmises, then, is that what has happened with the coffee/beer/wine industry is going to happen to the marijuana one: Small artisan growers get a jump-start and make big profits for a few years before large corporations buy them out, create partial monopolies, and dominate the industry from that point forward.
Legal commercial production in the U.S. is currently handled by a patchwork of small farmers. While there have been rumors for years of big agricultural firms buying up land ahead of legalization, it would still take time to develop a mass production product, and even more time to build a Maxwell House-like brand that would come to dominate that market.
Dominate they will, unless something drastic changes with the state of the country’s fundamental economic philosophy. That’s just the current way of our world. But there’s actually a distinct possibility that those artisan developers aren’t even going to get their handful of glory days before big business takes over. And the swift market domination may come from one of our favorite genetic-engineering corporate supergiants:Monsanto.
The move certainly makes sense on a logical level. At its core, marijuana is an agricultural product. It’s a crop. And that’s a system that Monsanto, as detailed time and time again in these parts, specializes in gaming. As far as the “technological advancements” they’re working on in order to put themselves ahead of the game:
The company is investing millions of dollars into this new technology dubbed “RNAi.” With RNAi, it is possible to manipulate everything from the color of the plant to making the plant indigestible to insects. With medical marijuana, RNAi could be used to create larger, more potent plants effectively cornering the market and exceeding the legal demand for the plant.
Picture the future: Marijuana-laced edibles being sold at Ralph’s — behind some kind of glass case, of course — that have not only been made with GMO-infused peanut butter and Rice Krispies and flour, but the marijuana itself has been raised with genetically-modified seedlings. That kind of product doesn’t seem like what cancer patients and other ill individuals will be looking forward to digesting to dull the pain. (We’re talking about medical marijuana here, after all.)
Which means that maybe the main issue we’ll be eventually dealing with is not whether we should have access to medical marijuana at all, but whether we should have easier access to medical marijuana that’s organic and GMO-free.

Monsanto Giving Up On Europe

Despite my best intentions to keep the fight over GMOs from devolving into a bunch of over-the-top rhetoric, it’s really, really, really hard to look at what Monsanto/DuPont & Friends are doing and not compare it to a war. The battle lines are distinct (GMO corporations vs. consumer-minded activists), the stakes are incredibly high (what our world eats), there’s plenty of propaganda being dropped (too much to sum up here within a proper parenthetical length), and the conflict has become a struggle over turf.
For instance, not only has Monsanto been trying toobtain a controlling stake in the soon-to-be-quite-profitable marijuana industry, they’ve also been attempting to get a foothold in the European market. (This, after all, is how corporations work; the answer to “do we have enough money yet?” is a boisterous “no!” followed by a slap in the face for asking such a silly question.) To spread their wings across the globe, they’ve been taking the tactics that work here in the U.S. — attempting to court/buy lobbyists to help guide the laws in their direction — and trying to translate them overseas.
But what makes the European theater of war different, is that their tactics didn’t work.

Story Continues Below
Support KCET
Monsanto recently announced they’ll no longer be trying to apply to grow new GM-crops in Europe. This brings to a screeching halt their attempt to develop “six types of corn, a soybean variety, and a modified sugar beet” in the European market.

Instead:Monsanto will now focus its European efforts on its conventional agriculture business and on enabling the import of GM crops for use as animal feed, a widespread EU practice that is less controversial than cultivating the crops in European fields.
As is the case with any business, the top dog in the field dictates how the rest will line up. Thusly, DuPont has also essentially quit the European game for the time being. So, if you’re in the anti-GMO camp, your reaction should be as follows: “Hooray! We win! The battle is over! Let’s all get on the plane, go home, kiss our significant other — or others, I don’t know how you live your life! — and have a good night’s sleep!”
This “win” is not the happy ending that comes with any Katherine Heigl movie. It’s more reminiscent of the finale of “The Wire,” actually. (And if you need a warning about spoilers for a TV show that (a) enough people should have guilt-tripped you into watching by now; and (b) is five years in the ground, consider this as that.) That show’s end had plenty of happy moments: Bubbles is welcomed back into his family; Daniels and Rhonda still together; McNulty retired; the evil Marlo left without street cred; Carcetti a newly-elected Governor. But those small victories are couched in the knowledge that nothing in the city of Baltimore — more accurately, the War on Drugs — has really changed.
Small victories do not mean the war is over.
So, despite the good news on the European front for anti-GMO activists, there’s still an awful lot to be weary about. Namely, the fact that Monsanto/Dupont & Friends have taken whatever investments they were planning on making in Europe and shifting them elsewhere.
First on the list:Africa, where Monsanto has attempted to flood the continent’s markets with their Roundup product. (And we’ve already seen what kinds of court battles come on the heels of that.) DuPont, meanwhile, spent their new reservoir of cash to buy a controlling share of South Africa’s largest seed company, Pannar:
It gives the chemicals company a large handhold over maize, one of the most important crops on the continent, three-quarters of which is already genetically modified. DuPont, through its Pioneer Hi-Bred division, now has control over one of the largest collections of genetic resources for the crop.
Also, Africa isn’t the only place on the globe where GMO corporations are trying to expand:
Monsanto has also made a $150 million investment in the Ukraine where it is bringing Europe’s largest seed production plant on line.
So, no. The battle has not been won with GMOs withdrawal from Europe. The focal point has just shifted slightly.
As far as what to do with this news? Well, the next March Against Monsanto is set to take place Saturday, October 12. Checking it out — and if you’re in L.A., here’s information about where to go — is a good start.
Source:
http://www.kcet.org/living/food/food-rant/monsanto-to-take-over-the-weed-industry.html
http://www.kcet.org/living/food/food-rant/monsanto-giving-up-on-europe.html