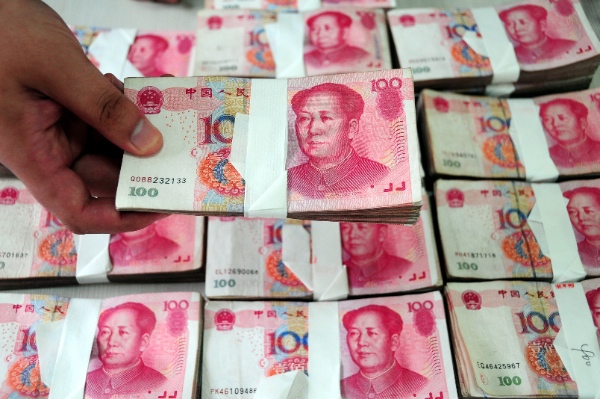 A staff member counts money at Matou Town Rural Credit Cooperatives on June 20, 2011 in Linyi, Shandong Province of China [Getty Images]
Analysts have given the thumbs up to the Chinese central bank’s announcement on Monday that the Chinese currency can now be traded directly against the euro in its interbank currency market.
This would be a major boost to trade between China and the Eurozone, says Nordea. China stepped up plans to increase the international use of its currency last October with an agreement between the European Central Bank and the PBOC to swap euros and yuan.
“From today, the USD is no longer needed for trading between CNY and EUR. The two currencies can be traded direct against each other. This would lower transaction cost in EURCNY trading and push for yuan internationalization,’ said Amy Yuan Zhuang, senior Asia analyst at Noredea Research.
The yuan is now the second most-used currency in international trade after the US dollar.
“Implications for European companies are beneficial in terms of lower transaction costs in exchange and trading. Generally it will increase convenience in trade and investment between China and the Euro area. Implications for China are more important. It is a cornerstone in CNY internationalisation and it becoming a global reserve currency,” said Zhuang in an emailed statement.
Beijing is keen on substituting the US dollar with the yuan in all of China’s trade with other countries. The Chinese currency now trades directly with the Japanese yen, the Australian dollar, the Brazilian real, the EU’s euro, the New Zealand dollar and many other currencies.
“This is an important step in strengthening bilateral economic and trade connections between China and Eurozone member states. This will help lower currency conversion cost for economic entities, facilitate the use of RMB and Euro in bilateral trade and investment, promote the financial cooperation and enhance economic and financial ties between China and Eurozone member states,” said the People’s Bank of China in a statement on its website.
Earlier this month, China’s central bank said that it had authorized the Bank of China (BOC) as a clearing bank for RMB business in Paris.
BOC has so far opened more than 1,200 inter-bank RMB clearing accounts and 1.7 million RMB accounts for corporate and individual clients overseas.
Competition is fierce among Europe’s major financial centres, Frankfurt, London and Luxembourg to trade in China’s currency.
In a major highlight of an investment meet earlier this month, Moscow and Beijing have entered into a pact to boost use of the rouble and yuan for trade transactions.

» Yuan Updates
» USD Needs Yuan in the SDR Basket
» Greeks Discard the Euro
» THE EURO HAS COLLAPSED (UNOFFICIALLY)
» All Hail the dickheads! – the months of their scamdemic