0
Get FREE private and secure Email and Messaging click now!
<a href="http://ox-d.beforeitsnews.com/w/1.0/rc?cs=5125e7a33c8bf&cb=INSERT_RANDOM_NUMBER_HERE" ><img src="http://ox-d.beforeitsnews.com/w/1.0/ai?auid=326914&cs=5125e7a33c8bf&cb=INSERT_RANDOM_NUMBER_HERE" border="0" alt=""></a>
(Before It's News)
Exactly one week ago I published an article with the meaning of the numbers and letters on the stone that was recently removed from the Georgia Guide stones, in particular from the slab with the English text.
For decoding I was inspired by the relation between the dots on opposite sides of any regular dice.

I also showed that there is a perfect numerical relation between the letters and the numbers, showing that there is no coincidence but a deliberate coding.
My conclusion was a date, being Oct. 3rd , 2014.
As I stated I was not going to speculate what would happen on that date.
Some did not agree and suggest other dates. I’m still open to one other solution (that is so far not proposed by anyone else), but for now I stick to what I found before.
But I wrote that: “it is likely that it has everything to do with the (start of the) ’New World Order plan’ as laid out on the Guide Stones”. And it seems that exactly that is the case. On the slabs of the Georgia Guide Stones we find the so called ten commandments for an Age of Reason. The very first of these commandments has to do with the size of the world population:So what happened on the 3rd of October? No large terrorist attack 9/11 style; no massive natural disaster… Some started to comment that yet another conspiracy theory had failed to prove itself.

Bringing back humanity to 500 million means a reduction of approximately 93%. One big head start could be one or more deadly diseases. It was indeed October 3rd that the first case of Ebola on US soil exploded in the news. The man that supposedly brought Ebola into the US, Thomas Duncan, has now died and more infected people are being reported every day. This could indeed have been the start of not only the population reduction, but of a cascade of events (economic crash, martial law, etc.).
But is there any other way that this outbreak of Ebola can be linked to the Georgia Guide Stones and to the NOW? The answer is Yes ! 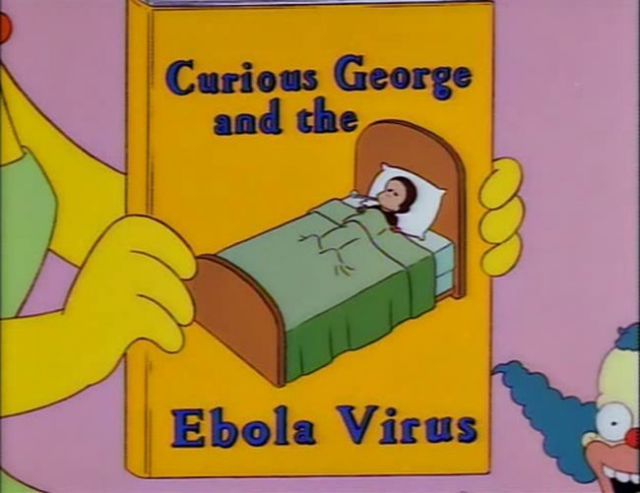 As others have already noted, there has been an episode of the Simpsons where a book cover is shown having the title: “Curious George and the Ebola Virus”. This might seem insignificant but it has already been proven that there were also hints to other events in Simpsons episodes, the most famous being 9/11.
However this could have been a coincidence but there is more. This particular episode of the Simpsons was aired on September 11th , 1997. A date that raises a red flag obviously.
So let’s take a look at the character of the monkey George. Wikipedia writes:
“The books feature a curious brown monkey named George, who is brought from his home in Africa by “The Man with The Yellow Hat” to live with him in a big city.”
Just like the Ebola virus, George was ‘taken’ from Africa to the USA. His name, George, could hint to the Georgia Guide Stones.
In the last of the original series of books (1966), George ends up in the hospital, just like the first Ebola victim, Thomas Duncan. 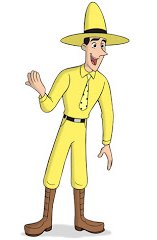 But wait, there is more. In the above quote from Wikipedia we read that George was brought or taken to the USA. This means a deliberate action. He was taken by “The Man with The Yellow Hat” after he caught George. If George represents the virus (originated from monkeys?), then the man with the yellow hat represents the carrier, Thomas Duncan. This is what Wikipedia writes about this mysterious man:
“The Man is never mentioned by name in the original adventures, or in any subsequent content over more than six decades. He is always called either ‘the Man’ or fully ‘the Man with the Yellow Hat’. When people speak to George about the Man, they often refer to him as ‘your friend.’ However, in the Curious George film (2006), the Man is referred to as ‘Ted’ throughout the film”
So it was not until 2006 that the man who brought George from Africa got a name: TED. Let us now look at our man who brought Ebola from Africa: Thomas Eric Duncan. His initials spell: TED.
And yes, I could not help of think the many men in yellow that we see on the news so often now, even in the cleaning of the very apartment where Thomas Duncan stayed.

All in all quite a few coincidences I would say. I am not suggesting that everything has been necessarily carefully planned as such. As I stated in the previous article, there are evil forces at work.
For our struggle is not against flesh and blood, but against the rulers, against the authorities, against the powers of this dark world and against the spiritual forces of evil in the heavenly realms. – Eph. 6:12
What we see is often but a manifestation of the things that are happening on a spiritual level. Let’s keep our eyes open and see how things develop.

My motivation:
Have nothing to do with the fruitless deeds of darkness, but rather expose them. - Eph. 5:11

» Metatron's Cube the Truth as you have never seen part 1 plus 2&3
» Mystery Of The Georgia Guide Stones And the Depopulation Of The World By The UN Agenda 21 Globalists
» FINAL NAILS IN THE EBOLA SCAM COFFIN: The 2014 Ebola Outbreak is a PROVEN FRAUD, Here is the Evidence.
» An Open Letter to the BRICS Alliance and the Dragon Family: Stopping US Ebola and US Ebola Coups in Their Tracks – EbolaGate
» EGYPTIAN STONES PART 1,2,4,5,6