NIH: ‘We May Have to Vaccinate Whole Countries to Stop Ebola Outbreak’ 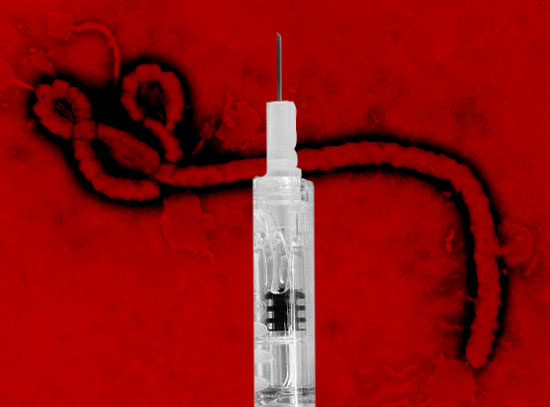 Has the endgame been revealed on the Ebola outbreak?
Two days ago, Dr. Anthony Fauci, director of the U.S. National Institute for Allergy and Infectious Diseases, told The Canadian Press that it’s “quite conceivable, if not likely” that fast-tracked Ebola vaccines may have to given to entire countries to get the viral outbreak under control (via Modern Healthcare):

“It is conceivable that this epidemic will not turn around even if we pour resources into it. It may just keep going and going and it might require a vaccine.”
“As the epidemic gets more and more formidable and in some cases out of control it is quite conceivable, if not likely, that we may need to deploy the vaccine to the entire country to be able to shut the epidemic down. That is clearly a possibility.” [emphasis added]

The article did not specify which country in particular Dr. Fauci — whose institute just so happens to be currently working on an experimental Ebola vaccine (the first to begin human clinical trials) with Big Pharma giant GlaxoSmithKline — was referring to. Was he talking specifically about Sierra Leone? Liberia? Guinea? Any place where Ebola has taken hold? The entire continent of Africa? Other countries, should it break out there including Spain or America?
The prospects of “countrywide” vaccination for Ebola with a rushed-to-market vaccination are absolutely horrifying.
Recall that some 800 children in Europe are now suffering narcolepsy thanks to the rushed swine flu vaccine. Daisy Luther of The Organic Prepper wrote:

Some people may say, “Oh, that was an experimental drug, rushed to market to fight an epidemic.”
The thing is, if you look at it that way, every flu vaccine is “experimental”.  Each year’s batch contains something different, because it has to be ever-evolving as viruses mutate. Despite this, people are terrified and guilted into receiving the vaccine. If the fear factor doesn’t work, they are forced to take it in order to work, go to school, or stay at daycare.

That’s not to mention a 4,250% increase in fetal deaths linked to the shot when given to pregnant women as well, amounting to thousands of miscarriages among a lovely menagerie of other awful adverse events.
And for what? What was revealed later to be a global hoax tied to grand financial motives, as Aaron Dykes reported back in 2010:

Drug firms collaborated with WHO officials to deliberately create a “campaign of panic” and a ‘false disaster’ over swine flu pandemic fears when one was not evident, top European health official Wolfgang Wodarg has indicated.
Wolfgang Wodarg, head of health at the Council of Europe, claims that the threshold for alert was deliberately lowered at the WHO, allowing a “pandemic” to be declared despite the mildness of the ‘swine flu.’ That designation would force a demand for the vaccine, which was subsequently purchased by governments or health facilities and pushed on the public through a full-scale fear campaign in the media.

Rest assured that whatever Ebola vaccine they come up with now will be even that much more rushed than the N1H1 vax. Why rushed?
As Truthstream Media reported, check out what Dr. Ben Neuman told Bloomberg this past summer in an interview on why no vaccine for Ebola currently exists:

“It’s not just one drug we need for Ebola. We need a cocktail of drugs and perhaps a nice vaccine that could be used… These all take a lot of money and right now in the history of what we know at least, there have been fewer than 5,000 people who have been infected with Ebola. It sounds scary, but I don’t know that there’s enough…uh…panic or enough people who are potential customers for these drugs to warrant a company — a private company anyway — putting the money it would take to develop this.” [emphasis added]

Well there is definitely enough panic now, wouldn’t you say?
Dave Hodges, over at The Common Sense Show, has already penned an article demonstrating how the CDC has positioned themselves to profit financially should Ebola spread throughout the U.S.:

The CDC has ulterior motives in the diagnosing and subsequent treatment of Ebola. First of all, the CDC is traded on Dunn and Bradstreet. This fact makes the CDC a for profit corporation. Secondly, and as I have pointed out before, the CDC owns the patent on Ebola and all variances up to 70% of the variance. This means that because the CDC owns Ebola, they will receive a royalty every time a treatment is provided because of the alteration of their intellectual property rights.
These two facts mean that if the CDC moved to block the spread of Ebola, they would cut into their profit motive.  On this point, there can be no argument. Are we supposed the humanitarian nature that the CDC would forgo their profit motive in order to serve the public good? Should we trust the CDC? What are the implications?

That might explain why the CDC is so against banning air travel from West Africa and even continues to change its basic stance on how the virus is even spread.
The World Health Organization’s latest figures on the current outbreak show that over 8,000 people have been diagnosed with Ebola as of October 5th, and nearly 4,000 people have now died.
Either way, I think I can speak safely for the staff here at The Daily Sheeple: we will not be rolling up our sleeves for any nationwide Ebola vaccination program any time not just soon, but ever.

“Like” Pandemic Watch on Facebook
The Prepper’s Blueprint: The Step-By-Step Guide To Help You Through Any Disaster

Contributed by Melissa Melton of The Daily Sheeple.
Melissa Melton is a writer, researcher, and analyst for The Daily Sheeple and a co-creator of Truthstream Media with Aaron Dykes, a site that offers teleprompter-free, unscripted analysis of The Matrix we find ourselves living in. Melissa also co-founded Nutritional Anarchy with Daisy Luther of The Organic Prepper, a site focused on resistance through food self-sufficiency. Wake the flock up!
- See more at: http://www.thedailysheeple.com/nih-we-may-have-to-vaccinate-whole-countries-to-stop-ebola-outbreak_102014#sthash.LJPymPQk.dpuf

» FINAL NAILS IN THE EBOLA SCAM COFFIN: The 2014 Ebola Outbreak is a PROVEN FRAUD, Here is the Evidence.
» UPDATES - Ebola outbreak in eastern Congo reaches city of 1.4 million – A link to quarantined planes in USA and France?
» An Open Letter to the BRICS Alliance and the Dragon Family: Stopping US Ebola and US Ebola Coups in Their Tracks – EbolaGate
» To Vaccinate or Not to Vaccinate – That Is No Longer the Question!
» Countries with Dicks in Space Vs Countries with Universal Health Care